SINCE Tweedle Dee and Tweedle Dum, it’s been clear that two heads are better than one.

So when a team of heads belonging to the Scottish Womens Open Touch Rugby squad got together to power a team crowdfunding campaign for their Touch Rugby World Cup bid, it was a resounding team fundraising success raising in excess of £5,000 – 127% of their target.

Here’s the other thing about; using our rewards-based sports crowdfunding model, teams, clubs, and organisations have a huge advantage as they have access to many more rewards options due to the numbers of people involved in their group. But not many fully unlock this potential.

Scotland’s Womens Open Touch Rugby team did. They set up three raffles, one for an array of items and experiences, likes rugby memorabilia, spa days, dinners, lunches and days out, and two for week-long holidays in Turkey and France.

To set this up they called on team players, team staff, friends, family and Scottish rugby supporters; it’s a massive pool that all teams, clubs and organisations have, they just don’t utilise it.

SWO did not then sit idle, they – and all the players – promoted their team fundraising project to their many Twitter and Facebook followers and created a narrative of the squad’s build up to the Touch Rugby World Cup.

They let people in and let them get to know the players, thereby building relationships that will be there to help should they need team fundraising again.

It’s a case of not only raising money through team crowdfunding, but also boosting the team’s profile, building up the fanbase, and boosting social media followings, via the campaign and the publicity it generated. These are lasting connections that create lasting supporters to help Scottish Womens Touch Rugby thrive. 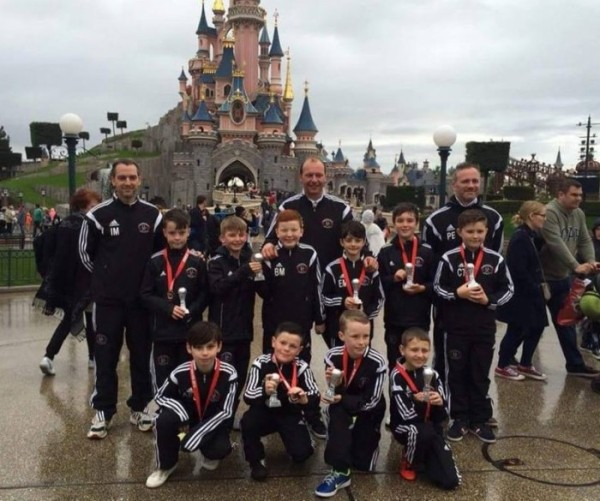 Welsh under 10s football team Llandudno is another example of what can be achieved by more heads than one, hitting their team fundraising target of £3,000 last year and going on to finish third in the International Football Tournament in DisneyLand Paris.

They offered a DVD of the DisneyLand experience, team shirts and framed photos – things that are at hand for most teams or clubs – and the services of the entire team for a community for a day for any task they needed completing; a single athlete fundraising via crowdfunding just cannot do that.

Think unique, think outside the box, that’s what we say to all campaigners using team crowdfunding on PledgeSports.org when it comes to rewards, and the possibilities for groups are endless.

Create a supporters club, offer training days, offer VIP match days, offer ownership of a square metre of turf, autographs, club kit, a reserved stool at the club house bar, build a raffle, make a loud, proud thank you video, these are some of the hundreds of options available.

Crowdfunding is an innovative way to generate funds for athletes, teams and clubs. By providing an online facility it has the power to directly connect sportspeople with their supporters, fanbase and a strong network of individuals who believe in them and want to be a part of their athletic journey.

Are you a team, club or organisation in need of funding for a season or target or project? Get in touch at info@pledgesports.org – we can help, it’s what we do.

One thought on “Team Fundraising Campaign Hits 127% of target”