I Can Focus On World Championships Thanks To Crowdfunding

The Bishop’s Stortford athlete did this through sports crowdfunding with Pledge Sports and, in her thank you message to her 55 supporters and sponsors, she explained why she chose this new sports funding mechanism.

“One Saturday morning, after swimming at the lake and whilst munching away on a bacon sandwich and sipping a cup of tea, the discussion of all the costs that competing in triathlons entails, came up,” she said on emmadearytri “A fellow triathlete recommended setting up a sports crowdfunding campaign, which I then looked into and decided why not?

“One month later I am completely overwhelmed by the support I have received from friends, family, colleagues and companies I work with. I managed to raise 125% of my target! 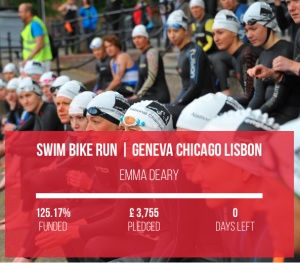 “55 people supported my campaign, all of which I have personally thanked. However, I would specifically like to thank again the following companies for their generous pledges: Eddie Stobart, George Killoughery Ltd, Bis-Henderson and Volker Fitzpatrick.”

Since her successful crowdfunding campaign, Deary has competed in two triathlons, finishing second and first, and has secured a position as ambassador for Profile Protein.

She added: “I can’t believe how quickly this year has gone. I have two races left, one of which is a training race at the Hertfordshire Triathlon Championships and the other, the small matter of the World Championships in Chicago in four weeks time!

“Thank you again to everyone for their support and to my main sponsors DP World London Gateway, Paddock Cycles, Ed Kirby Physiotherapy and Profile Protein.”