Winter Sports Taking Off Too Fast

A SURGE in Winter Sports athletes joining PledgeSports has prompted us to worry that Winter Sports are just taking off too fast in Britain and Ireland.

Jamaica knows exactly what these mild nations are going through. Back in 1988, the whole country was absorbed by this ridiculous notion that a tropical island was going to take a Bobsleigh team to the Winter Olympics. 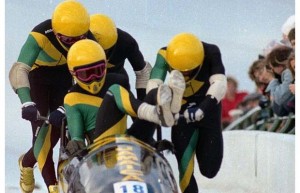 Never mind having a Winter Sports team, Jamaica didn’t have a winter! Yet they went, and they went again in 1992, 1994 and last year to the 2014 Sochi Winter Olympics in Russia – with a little help from their friends via a successful crowdfunding campaign that raised just shy of $56,000.

It was such a successful crowdfunding campaign because winter sports are such a novelty to Jamaica that it raised intrigue in people; used to Sprinting champions, they were fascinated by the bravery of their Winter Olympics contenders, who were achieving greatness in conditions far removed from anything they could experience at home.

Britain and Ireland do have winters. They do have snow and ice, and a winter skiing holiday is the done thing for many a British or Irish family. But competitive winter sports are by no means mainstream.

In PledgeSports’s first year, British biathlete Sam Cairns signed up to fund his Junior World Championships bid. It’s a sport that’s virtually unheard of outside Scandinavia, but Cairns raised his target of £3,000, and when he needing funding for next year’s target, he raised a further £4,000.

If a winter sport that unknown and unpopular in Britain can achieve that kind of success with crowdfunding, imagine what a Gold Medal-winning one can do? Actually, you don’t have to imagine.

Thrilling Skeleton racing star Kimberley Murray has just raised more than £2,000 towards her Winter Olympics 2022 campaign through PledgeSports.org, turning just as many heads as Sam Cairns did, but maybe not as many as Ireland’s Brendan Doyle.

His story to winter sports and Skeleton racing is one of real drama and struggle; winter sports essentially saved his life as The Times recalls here. He’s still in need of sponsorship, lend a hand if you can.

Skeleton racers, Skiiers, Curlers, Biathletes and Snowboarders, have all successfully funded their winter sports goals through PledgeSports’s crowdfunding platform, with Brogan Crowley being out latest Skeleton racer and England’s Ladies Curling Team (above) just finishing up their campaign with more than £2,000 raised.

It’s going to be several years before the chief funding agencies can catch up with the amount of winter sports talent in Britain and Ireland right now and if we don’t personally step up to support these stars, we run the risk of losing the momentum.

So check out Kimberley Murray, Brogan Crowley, and Brendan Doyle‘s campaigns, give them a hand, then please let us know what we can do to help your winter sports dream.