So what should women in sport do? Getting behind campaigns like #ThisGirlCan and Womeninsport.org – who last year revealed the startling women’s sports sponsorship statistics – is a vital first step to making a difference in the long-term. 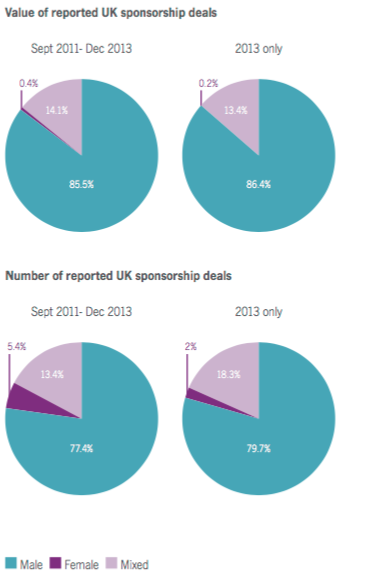 PledgeSports.org vehemently supports and contributes to this drive for more women’s sports sponsorship.

More than 50% of the athletes, teams, and clubs raising sponsorship through sports crowdfunding on PledgeSports.org are female – or mixed gender – and this number continues to grow as the popularity of women’s sports does too.

In the short-term, PledgeSports.org sports crowdfunding provides female athletes with a platform to raise the money needed to make up the sponsorship, funding and prize-money inequality.

In the long-term, it provides women’s sports with a platform to grow as a brand and as a commercial entity.

Each woman that comes to us to raise sponsorship  – to train harder, or to travel to compete on the world stage, or to prepare for a big event, like the Rio 2016 Paralympics and Olympics – is generating media attention for women’s sports simply by launching their sports crowdfunding campaign.

By being online, sharing their sports story, their background, their successes and their goals, they are laying women’s sports bare for all to see. As they then promote their campaigns through social media, they are creating a fanbase and an online persona that becomes a brand in the eyes of commercial sponsors.

Then we step in and use our own fanbase to push their story out even further, before taking it straight to the media. Our women’s sports stories have been covered by BBC Sport, ITV, The Independent, The Irish Times, countless sports magazines, local newspapers, national radio stations, local radio stations, and even at Tedx Talks.

A BBC report two years ago found that 30 per cent of sports award more prize money to men than women, and that some of the biggest discrepancies were in team sports like football and rugby.

The biggest discrepancies in funding and sponsorship also come in team sports, the FA Women’s Superleague getting less than 2% of the amount Carlsberg pumped into The Premier League in 2013.

It’s no surprise then to see last year a flurry of women’s sports teams and clubs turning to sports crowdfunding on PledgeSports.org to raise money, ironically for the growing travel and training costs that come with the sort of success that sponsors should relish!

The Scottish Women’s Touch Rugby Team is a prime example. They qualified to play at the Touch Rugby World Cup on Australia’s Gold Coast, a trip which would cost each player £2,500.

Having had success with local raffles, they decided to use PledgeSports.org to take that raffle global, resulting in 128% of their target being raised – the total coming in at over £5,000.

The England Women’s Curling Team is another top example, raising more than £2,500 for last year’s European Championships mission, as is the Tanzanian Women’s Hockey Team – they needed $5,000 to get to Africa Olympic Qualifying and hit that target with ease.

In the build up to London 2012’s Olympics and Paralympics, women’s sports sponsorship increased five-fold in the UK, but in the aftermath it dropped back to pennies above the pitiful pre-London 2012 levels of under £1million.

That lack of certainty and longevity is a major feature in women’s sports sponsorship, with many deals signed to run for far less time than those signed with men.

It means women in sport find it harder to plan ahead, and also have little to fall back on when it goes wrong, as we have learned from the likes of hurdler Lucy Hatton and Paralympic medallist Lucy Shuker.

They are both self-funding their Rio 2016 Olympic and Paralympic hopes through sports crowdfunding on PledgeSports.org. That’s kept their dreams alive when other funding and sponsorship avenues have proven fickle.

Be a women’s sports sponsorship solution

As discussed above, building the women’s sports brand is vital to it becoming commercially viable to sports sponsors, and ultimately becoming fully equal to men’s equivalents.

You can become a part of that on PledgeSports.org by personally or professionally sponsoring a female athlete, team or club. It’s like an online shop for women’s sports sponsors – and we’re always open for business, worldwide.

Israel’s Netball Team are sports crowdfunding to raise sponsorship for their European Netball Championship mission in Newcastle this year.