WANT to know what a world-famous Octogenarian tennis coach is up to on the eve of Wimbledon?

PLEDGESPORTS Founder Richard Pearson doesn’t hide the fact that he’s a huge tennis fan, so when he literally bumped into legendary tennis coach Nick Bollettieri at his tennis club in Dublin, he was shocked. 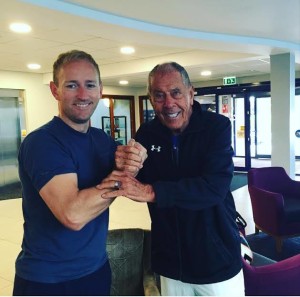 “I became a massive tennis fan in the 90’s during the period when the Sampras V Agassi rivalry ruled tennis and the US was the dominant force on the ATP tour with Agassi, Sampras, Couier and Chang all being in the top ten for years,” he says

“I was alway an Andre Agassi fan so to meet the man who coached him – Nick Bollettieri – was incredible.”

Thankfully he regained composure for long enough to talk to the great tennis guru and find out some of the secrets that have helped him mould some of the world’s finest tennis players, most notably that eight-time Grand Slam title winner Andre Agassi.

“Nick was great, a real personable guy who wanted to talk to everyone,” Richard explains. “So when I told him I work with a lot of tennis players he said, ‘hey, lets go outside, sit down and we can have a talk’, I was delighted.

“We discussed the usual: Federer, has he one more Grand Slam in him? Murray, Djokovic, and of course the PledgeSports tennis players – I was so delighted to hear he had offered Jenny Claffey a week at his tennis academy in Florida.”

He adds: “For the record, we both agree that Federer is not really fussed about doing well in tournaments leading up to Grand Slams, and that, at his age, he has found it is best conserve his energy for the gruelling 5 setters that may have to be played in slams, like Wimbledon 2016.”

At 85, Nick Bollettieri still coaches tennis all day from 6am. He still has 20:20 vision, despite having had no surgery and never using glasses. He still weight the same (154lbs) as when he was a master paratrooper in his early 20s, and he only sleeps 4.5 hours every night.

This year he will travel 225,000 miles to coach tennis, spreading his genius across all levels of the sport, and not least at Wimbledon this week and beyond.

Richard concluded: “The guy is an inspiration, and I was so surprised by how sharp, fit and active he was at 85. I think most 70-year-olds out there would be jealous. In fact, he is way more active and fit that friends of mine in their 30’s!”

Nick Bollettieri is most famous for his coaching of Andre Agassi, but he has participated in the development of so many more leading tennis players, including former World No.1s Jim Courier and Monica Seles, and World No. 3 Mary Pierce – who between them won 17 Grand Slam titles.