When Barefoot Met Gump At Parkrun 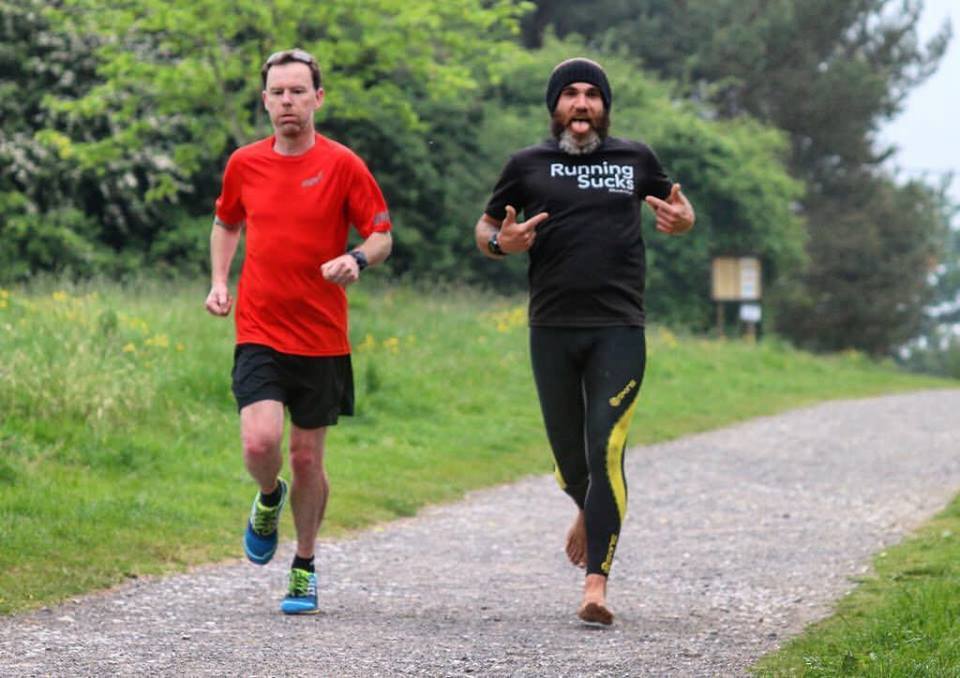 IT has been a phenomenal fews weeks following our THREE crowdfunding ultra-marathon runners as they prepare to take on runs later this year that will total more than 26,000 miles – and then this happened.

It blew our socks off really: JimGump, out to bring Forrest Gump’s US-wide run to life, jogging side-by-side with Barefoot Aleks, the man who has already run LEGOG and is now aiming for Norway to Sicily on the E1 Trail.

These guys have admired each other from afar since they met through their PledgeSports.org crowdfunding campaigns, and both fell into ease with each other immediately when meeting for the first time – probably because they were both running at the time!

“I’ve followed Jim’s preparation for a while and absolutely adore the adventure he has planned,” Aleks told us, “and his single-minded determination to make use of it in a positive way.

“His dedication has been incredible and to manage to catch up with him was great.  It was so refreshing to meet someone who is more focused on inspiring others to be more active, through running, than on his next PB or what race position he comes in.

“Really there’s no real way to express how impressive his determination, achievements and his goals are.  A true inspiration and awesome to have met, run and chatted with him.”

Jim was just as taken by Aleks. They had got in touch when Aleks noticed his PledgeSports.org crowdfunding campaign for his JimGump projected – to bring to life Forrestt Gump’s fictional 20,000 run across America.

Aleks messaged Jim to tell him he thought he was cool. Jim liked that. He also likes Aleks.

“I probably won’t (sorry to disappoint folks). I’m actually not trying to be Forrest Gump, I’m trying to use the run to help me to achieve what it is that I really want to achieve, which is to get people moving.

He’s got a pretty good voice going on to, as you can hear in #OperaticLandscapes, and his new comrade, Jim, has a pretty big heart: “I believe in this more than anything I have ever done in my life.”