Where are they now? – Emma Cahill

Our “Where Are They Now” blogs take a look at former PledgeSports athletes and their lives since. This week we catch up with “Athlete of the Year” in 2015! – Para Dressage Rider and all-round inspirational figure, Emma Cahill. 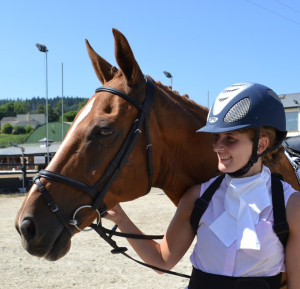 Six years ago, Dubliner Emma Cahill was involved in a serious accident where a horse flipped over and smashed her spine, causing damage to her spinal nerves. At the time, doctors said that she would never walk again. Little did they know, Emma Cahill does not believe in impossible.

Emma picked up Para Dressage in 2013. In the trusted company of her noble horse Capital Coin (Red, as he is affectionately known), she went from her very first Novice test in 2013 to International CPEDI3*, all in under 12 months.

2014 was huge turning point in Emma Cahill’s dressage career. Firstly, being fast-tracked by Paralympics Ireland as an athlete with potential to compete at Rio 2016, and then being awarded to separate bursaries, from Horse Sport Ireland and the George Mernagh Memorial Bursary. The year culminated in Emma making her international debut at Hartpury, picking up 6th in the individual championship and 4th in the “Freestyle Music” category.

Emma is one of the success stories we just love to share. From the moment she joined us at PledgeSports we, like everyone else, were inspired by her story and her determination. Her dedication to succeeding was clearly demonstrated through how successful her fundraising turned out to be! 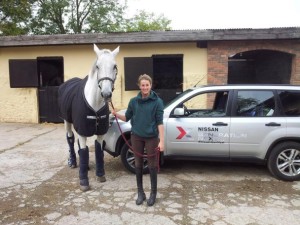 “Pledge allowed me to train with a new horse in a foreign country for months and represent Ireland at two international CPEDI3* events in 2015. After Pledge, it became apparent that I couldn’t continue at the pace I’d set without giving up my job and some sort of miracle backer to buy the horse,” Emma told us recently.

“It also didn’t look like Ireland were going to send a team to Rio which made things more difficult. I made the difficult decision to take a step back and focus on my career, which at the time was in the sports-medical world, so that I could up my earning capacity, restock the war chest and come back stronger when I did give international level another shot,” she added.

Perhaps the step back that Emma took was one of the most wise decisions she could’ve made. It certainly seems that way when you run through the incredible feats and milestones she has achieved since focusing on her career.

“I continued with the motivational speaking that got started with all the coverage during Pledge and I was keynote speaker at the Q Ball for Spinal Injuries Ireland in front of 600 people in October 2015 and in June 2016 RTE released a documentary about me so it’s been great,” said Emma.

Watch Emma’s moving and inspirational appearance at TedX below:

“Since Pledge, I was promoted twice in my job in London and in May 2016 found out I had been accepted into the very competitive Bord Bia Marketing Fellowship Programme. It’s an MSc in International Marketing with a full scholarship for UCD Michael Smurfit Graduate Business School where you’re based abroad for one year representing four Irish food and beverage companies.

“Twenty of us were selected from over 600 applicants and it’s the opportunity of a lifetime to boost my career,” said Emma. 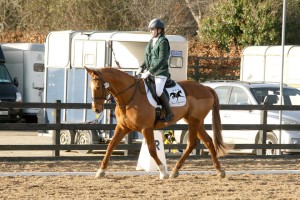 Emma has really gone from strength to strength, proving time and time again that misfortunes in her past will not hold her back from the future she wants. But how has her career-focused mindset impacted Para Dressage and what are her ambitions in the sport?

“I’m living in Paris for the year so I’ve had to park my riding which was a really scary prospect. Within a week I was climbing the walls but I’ve taken up CrossFit which is working out as a fantastic replacement. I still ride Red when I visit home in Ireland and the CrossFit keeps me fit enough to do that well and without walking like John Wayne the next day!” laughs Emma.

“I finish the fellowship in June so I’ll be looking for my next opportunity in the Irish food industry and starting my plan of attack for *maybe* Paris 2024 Paralympic Games – who knows!”, she adds.

Wherever Emma Cahill goes in future and whatever she does, we’re confident that she will continue to inspire those fortunate enough to meet her and more importantly, always refuse to believe that something can be impossible.