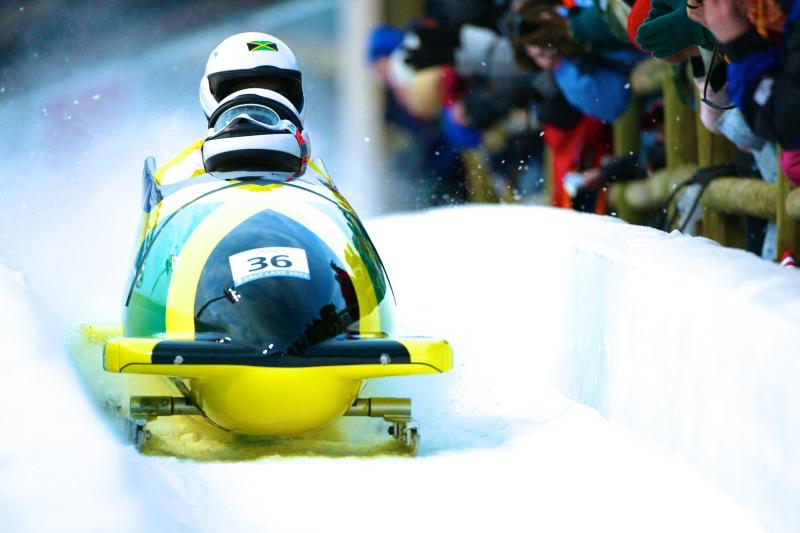 Every four years, the Winter Olympics rolls around. Since beginning in 1924 the games have produced some fantastic scenes. Here, we re-live the best Winter Olympics moments ever.

As experts in fundraising for winter sports, we’re helping a lot of Winter Olympic athletes get to Pyeongchang 2018. Maybe they will have some cracking moments like the ones on this list!

From the inspiring story of the 1988 Jamaican bobsled team to the “Housewife Superstars” of the British curling team, there’s been no shortage of historical moments.

In 1924, at the first ever Winter Olympics, eleven-year-old Sonja Henie managed to grab a picture with her hero, world champion figure skater Gilles Grafstrom. Grafstrom won the Olympic gold that year, while Henie would go on to win the gold in 1928, 1932, and 1936.

Enjoying this? You’ll love the “Winter Olympics” section of our blog!

Later called “The Forgotten Miracle,” the U.S. Ice Hockey win over Canada for the Olympic Gold in 1960 was as incredible. The U.S. came into the games as severe underdogs who didn’t stand a chance against the Soviet Union and Canada. What happened, however, is still one of the greatest Olympic triumphs in history.

We answer the age old question “whats the fittest sport”

The U.S. would go on to repeat the feat over their neighbours in 1980.

Frenchman Jean-Claude Killy swept the alpine skiing events at the 1968 Olympics. His performance was so dominating that spectators and the media dubbed the games, “The Killympics.” Here is one of his gold medal-winning runs at Grenoble 1968.

The Jamaican bobsled team stole all the headlines at the 1988 Winter Olympics in Calgary. The team would crash in the four-man event but be cheered on by the gallery as they pushed the sled across the finish line. This great story would, of course, inspire the popular film, “Cool Runnings”, and cement the Jamaican bobsled team in the greatest winter olympic moments ever.

Raising money for winter sports/Winter Olympics? here’s how we can help.

Undoubtedly, the biggest story of the 1994 games in Lillehammer was the saga between American figure skaters Tonya Harding and Nancy Kerrigan. A month before the games, Harding’s ex-husband was alleged to have hit Kerrigan on the knee in an effort to put her out of the games.

To the surprise of many, Kerrigan returned and won the silver medal.

Down, But Never Out

Austrian Hermann Maier suffered a horrific crash during his first Olympic run. It was so bad that many thought he might be paralysed. To everyone’s surprise, “The Hermanator” would return to preparations the following day. The legendary skier went on to win 2 Olympic golds that year.

At the 2002 Olympics in Salt Lake City, Jim Shea became a third generation Olympic champion when he won the gold in men’s skeleton. His father competed in nordic and cross-country skiing events while his grandfather was Jack Shea, the famous Olympic speed skater.

The most successful nation in the Winter Olympics by medal count

In 2002, Great Britain’s women’s curling team took home the first British Olympic gold in 18 years. The team was made up of “housewife superstars,” and captured the imagination of the United Kingdom.

The 8 most extreme and dangerous sports!

After being overlooked as the U.S. team’s main medal contenders in the bobsleigh, Vonetta Flowers and Jill Bakken won the first women’s bobsleigh gold in Olympics history in 2002. Significantly, Flowers became the first African-American athlete to win gold at the Winter Olympics.

Shaun White led a historic showing for the U.S. team at the 2010 Winter Olympics. While White defended his gold in the Snowboarding Halfpipe Competition, the team won an unprecedented 37 medals.

At the 2010 Vancouver Olympic Games, Canada won the event that Canadians truly care about — Ice Hockey. Sidney Crosby scored the game-winning goal against the U.S. in overtime to win the gold.

The 10 greatest Skiers ever

Hope you enjoyed our blog – the greatest winter olympic moments.  Head over to our blog for lots more fun sports trivia