Audrey McIntosh is preparing to write history as she will run 7 100km ultra-marathons across 7 continents.

Audrey has joined PledgeSports in an effort to fundraise for this extreme expedition – you can view her incredible story here.

As you’d imagine, her preparation for this challenge is gruelling, and perhaps none of her training sessions will be outdone by the terrifying prospect of running the Sandbaggers double marathon across the sweltering plains of the Namibian desert and the sub-zero, icy terrains in Mongolia.

Straight from the diary of an ultra runner, here is Audrey’s account of her freezing cold marathon through the Ice Age setting of Mongolia. This is ultra at its very best!

Oven To Freezer – A Double Marathon Experience: The Freezer 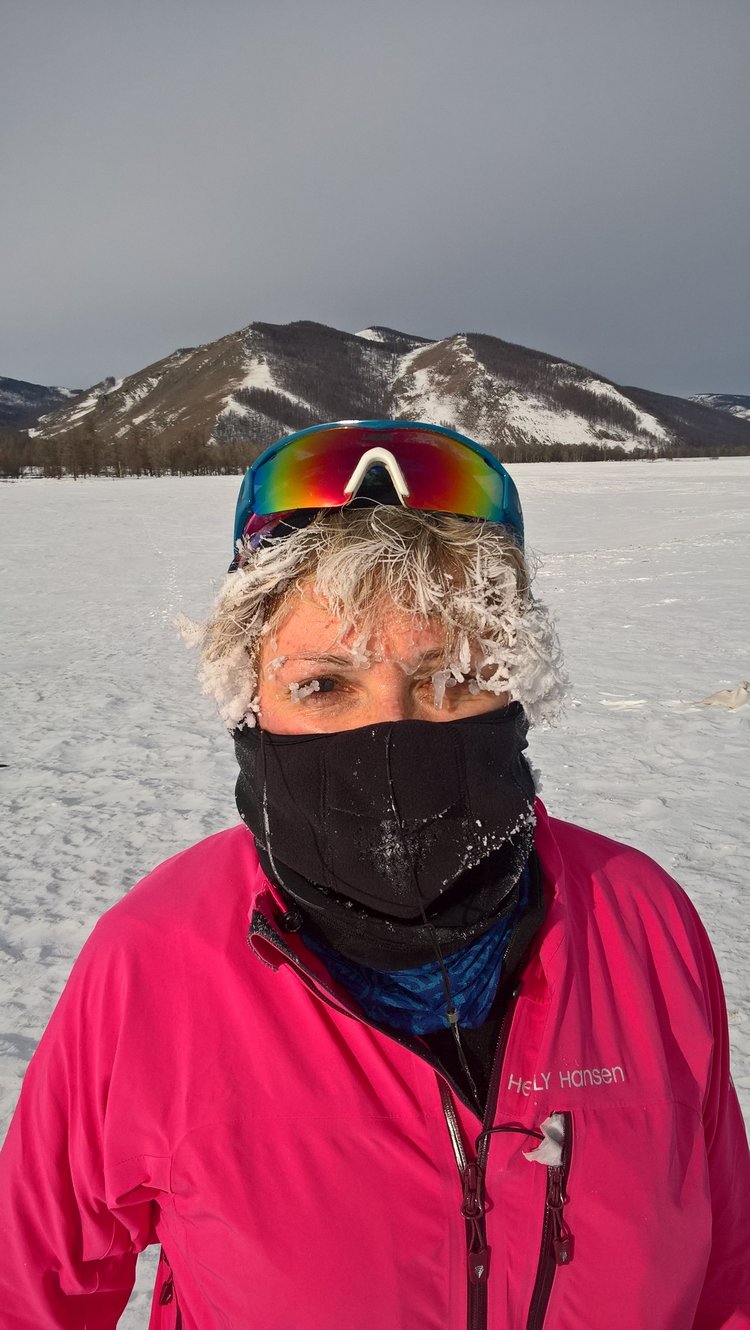 Dawn was just breaking as we got up and breakfasted before congregating at the vans for the short drive to the start. This time there was no diva panic attack; I knew the drill. The van would come to a sudden stop, we would pile out and off. There was, of course, the usual swithering over kit: goggles or glasses, buff and balaclava or just balaclava, mittens or no mittens. Running round in little circles chasing my tail.

It would be the same as Namibia; an unmarked route with us following the support vehicle tracks and keeping a visual on them. The vehicle with me started off creeping along behind me, which soon became incredibly irritating. I began to feel hunted, but also found myself struggling to determine the route in places.

Eventually, we managed to persuade the driver to go ahead. Unfortunately for the non-runners in the van, he never went far enough ahead to allow them time to walk about and admire the environment. There was also one very tetchy moment when he drove, of course, dragging me along with him.

There was much confusion when he stopped and it dawned on me that I was going the wrong way. Apparently, he had gone off to allow Alasdair to take photos. A kind thought but not helpful to the running diva.

The route started at the end of the road, on the bank of the Terelj River on the edge of the village of the same name and headed up a long valley which was initially flat with a few frozen streams, before a long gradual climb to the valley head. One of those climbs that you don’t notice and find yourself wondering why your legs are so heavy and tired. 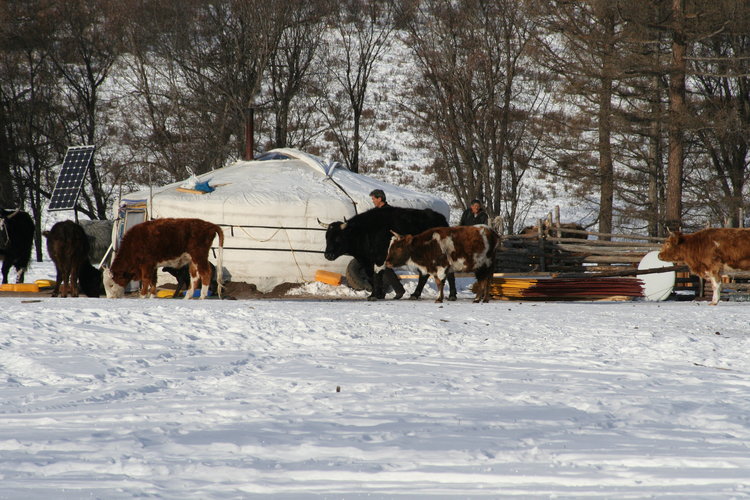 Dave checked in with me at this point and it was a thumbs up from me but with the comment that I still had Namibia in my legs.

We had passed gers, cows, horses and a yak before the valley became more remote, exposed and extremely cold. Water was freezing and the Mars Bar in my pocket turned into a rock. At one point there was so much ice on my eyelashes that the weight started to pull my lid down.

Up near the top of the valley, I spotted paw prints, with big claws: bigger than a dog. Wolf? Better run faster. No, most probably a wolverine.

After coming back down the valley the route transferred onto the Terelj where we ran a loop along the river back to the start, through the woods and back onto the river for a second half loop finishing a bit up the valley.  There were gers scattered along the river bank and huskies at one point. 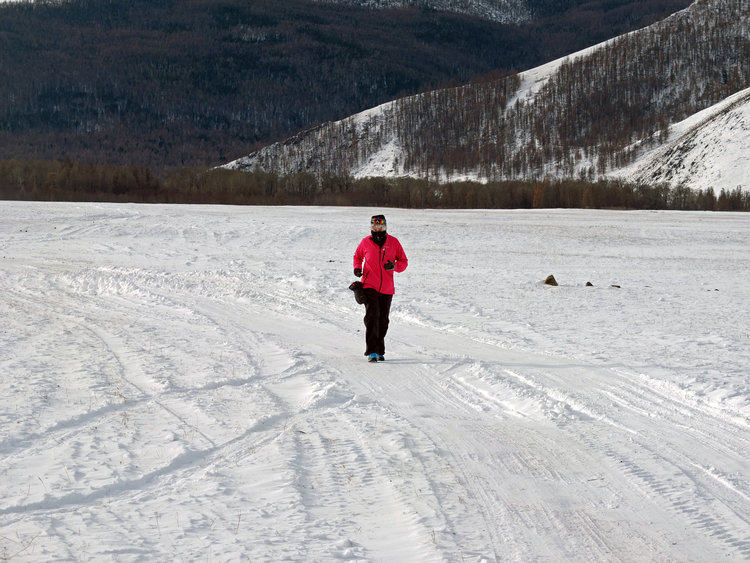 Running on the ice, or not as it turned out, was a completely new experience. Progress was slow.

Where there was snow on top of the ice it was possible to jog, but where the ice was not covered it was sheer and I found myself tottering along cautiously; weaving around trying to find spots with greater traction, without straying too far from support vehicle tracks. Diva on ice moment.

We all adopted different techniques it seemed, I noticed that Andrew Murray opted for a sort of skating technique/gait.

As I came to the river I was unsure where I was going as Alasdair had told me that he thought they had had to change the route due to the condition of the ice which had changed overnight. Where was I to go? He didn’t know. Cue a grump fest, not helped when Andrew Murray rocked up saying he was finished: deep joy.

He asked how I was: grumpy was my answer. Was I eating enough? No probably not. In fact definitely not. A rooky error on my part as I know all too well that the calorie burn is far greater in the cold. But, hey, it was bragging rights time. He was going to guide me through the detour. How many people can say that they have had Andrew Murray as a support runner! 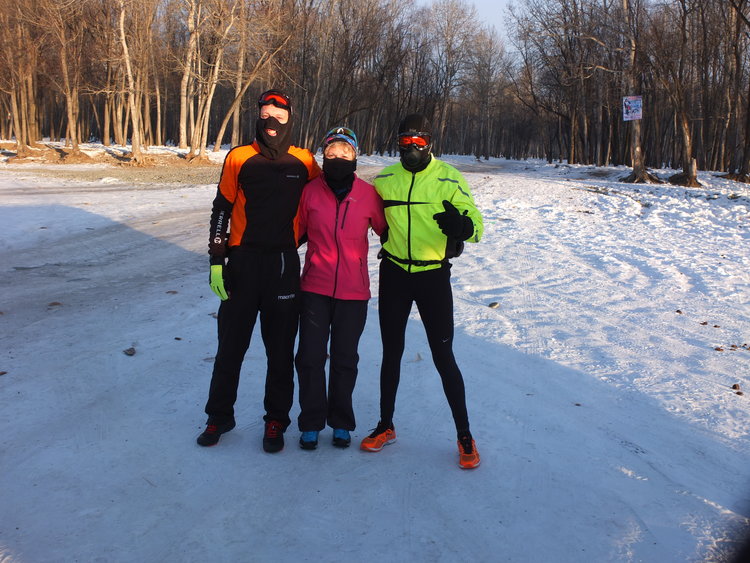 He spotted a bit of frost nip on my cheeks too, so at the next stop plenty of food and on with the goggles. Coke and Mongolian paprika Pringles really hit the spot. I was really, really tired now and cold and realising that I should have eaten considerably more over the event than I had.

I arrived back on the river and the second lap mistakenly thinking that the finish was at the start point especially when the guide indicated ‘two’ to go. Two what?

As I approached the start point I realised I still had two miles to go and my heart sank and my frustration grew. Andrew was there in one of the vans encouraging me, telling me I was going well. It did not feel like it. I was now walking more frequently, but I pressed on. A glimpse of the main vehicle through the trees, the finish was in sight. That last two miles had seemed interminable.

Andrew and Dave joined hands and created a finishing arch. I was done and I had completed the double. The only person to do it! There were a few tears. My time: 6:17 with only a few seconds difference from my Namibian time. I am nothing if not consistent.

I was whisked off back into the village to join the others for food and then off to a hotel for the night. It was a new hotel, rather grand and gaudy, and pretty much empty. It was also devoid of hot water. All I wanted was a hot bath, even a warm shower, but no. And yes, you’ve guessed: major diva paddy. A lukewarm sponge down at the sink didn’t quite cut it. Humph. All part of that ‘things not going to plan’ and just having to roll with it.

Now, what next? The Global Odyssey 100 of course.

Got a story or idea you would like to post on our blog? We’d love to hear from you – get in touch via the email address above.