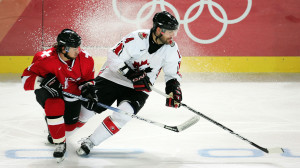 TURIN, ITALY – FEBRUARY 18: Todd Bertuzzi #14 of Canada and Flavien Conne #4 of Switzerland clash during the men’s ice hockey Preliminary Round Group A match during Day 8 of the Turin 2006 Winter Olympic Games on February 18, 2006 at the Torino Esposizioni in Turin, Italy. (Photo by Robert Laberge/Getty Images)