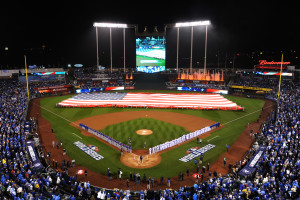 Members of Team Whiteman take part in a flag ceremony during pregame ceremonies of the World Series game one at Kauffman Stadium in Kansas City, Mo., Oct. 27, 2015. More than 100 service members participated in the flag ceremony that took place before the game where the Kansas City Royals defeated the New York Mets 5-4 in 14 innings. (U.S. Air Force photo by Tech. Sgt. Miguel Lara III/Released)