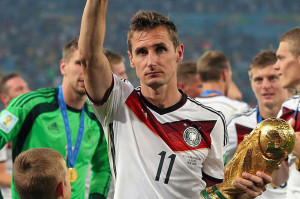 RIO DE JANEIRO, BRAZIL – JULY 13: (CHINA OUT, SOUTH KOREA OUT) Miroslav Klose of Germany holds the World Cup trophy to celebrate after the 2014 FIFA World Cup Brazil Final match between Germany and Argentina at Maracana on July 13, 2014 in Rio de Janeiro, Brazil. (Photo by The Asahi Shimbun via Getty Images)