We are all familiar with the modern day UFC, the massive paydays, globally promoted fight cards and incessant trash talking..  But let’s take a step back and see there it all started. 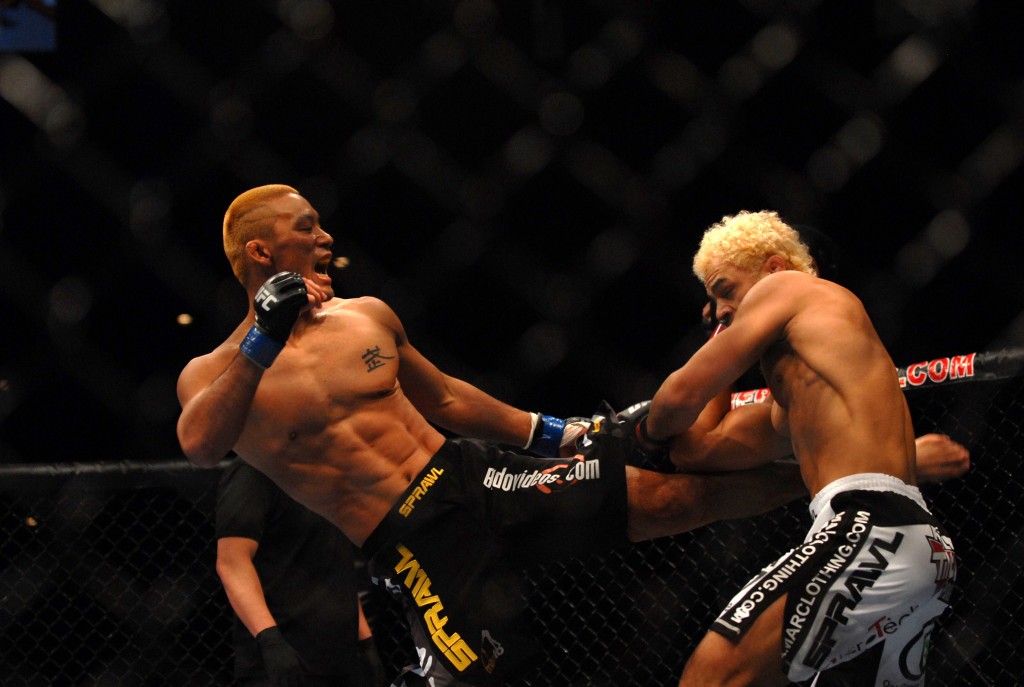 The Ultimate Fighting Championship – UFC was the brainchild of Rorion Gracie, an expert in Brazilian jiu-jitsu (BJJ), and Arthur Davie.  Gracie wanted to promote his family’s legendary martial arts school, which was focused in Mixed Martial Arts (MMA).  At this much famed school the Gracie family used to hold a competition called the “Gracie Challenge” which was  an open invitation for experts in any fighting technique to face off against a member of the Gracie family or one of their students in a real fight.  The Gracie family will be forever synonymous with MMA and the UFC.

The UFC Hall of Fame

It all started with UFC 1 on November 12, 1993, which was an eight-man tournament format, with the winner receiving $50,000.  The event was put on by Semaphore Entertainment Group (SEG) and featured fights with no weight classes, time-outs, or judges.  The two rules, no biting or eye gouging, were to be enforced only by a $1,500 fine. The match only ended by submission, knockout, or the fighter’s corner throwing in the towel.

Royce Gracie, the brother of Rorion won the tournament by defeating Gerard Gordeau via submission due to a rear naked choke. The referees for UFC 1 were João Alberto Barreto and Hélio Vigio.   Royce went on to win three of the first four events and has since been enshrined in the UFC Hall of Fame and considered one of the greatest UFC fighters of all time.

Early UFC events were very different from modern ones. There were no weight classes and a smaller fighter might find himself facing a giant wrestler. Weight classes would only be defined for the UFC 12 tournament.  Also in the early days Fighters could wear clothing traditional to their fighting style.

The toughest sports in the world

With very little rules, the clash of fighting styles and no weight classes the early UFC tournaments proved very popular with pay-per-view audiences.  And with no weight classes there were some serious miss matches in the early days of UFC!  Famously in UFC 3, Keith Hackney squared off against Sumo master Emmanuel Yarborough. Hackney gave up 9 inches in height and 400 pounds, but he still found a way to win!

According to Dana White, the evolution of the UFC was haphazard because it was never meant to happen. “That show [the first Ultimate Fighting Championship event] was only supposed to be a one-off. Well, it did so well on pay-per-view they decided to do another, and another. Never in a million years did these guys think they were creating a sport.”

This image of lawless brutality eventually attracted bad publicity and the major cable companies refused to carry UFC shows, and distributors weren’t even willing to sell video tapes of the events.  But it’s loyal following kept it alive and by introducing more rules and regulations to the sport and thus it continued to grow.  Gloves and weight divisions were then added,  groin shots and headbutts were banned, plus a number of other changes ultimately resulted in it becoming more accepted to the general public.

UFC 29 and the arrival of Dana White

By the year 2000, SEG had struggled through the last few fight cards financially and the company faced bankruptcy.  Political pressure notably from Senator John McCain who referred to UFC as ‘human cock fighting’,  had crippled its ability to finance, book and promote shows.

SEG’s last run was – UFC 29: Defence of the Belts.  After that event two brothers, Frank Fertitta III and Lorenzo Fertitta, formed Zuffa, LLC (zuffa means “to fight” or “to scrap” in Italian) and bought the UFC.  Former amateur boxer and fight promoter Dana White became president of the new organisation.  It was a perfect pairing as Lorenzo Fertitta was a former member of the Nevada State Athletic Commission, this gave the UFC some much needed credibility, with the commission eventually overseeing UFC events.

The 10 greatest UFC knockouts ever

With this in place and better marketing, cable companies (pay per view) carried UFC 30 Battle of the Boardwalk Atlantic City, New Jersey on February 23, 2001.   It was a big success and became the first UFC event since UFC 22 to see a home video release.  After this the new owners was allowing the championship bout fighters to choose their own entry music in lieu of the standard UFC theme song.