What to Expect from the IPL 2021 Phase 2 That’s Taking Place in UAE in September/October?

Cricket is the most popular sport in India and the Indian Premier League (IPL) is the most popular competition in this country. Every year, millions of fans tune in to watch cricket games from March through May. At least, that was the case in the past. However, in 2021, the IPL is going to see its conclusion a few months later than usual.

The story goes that the remainder of the season will be played in the United Arab Emirates in September and October. The reason behind this is the worsening COVID-19 situation in India.

It was May 4, 2021, when the Board of Control for Cricket (BCII) announced the suspension of the 2021 IPL season. Following the rise of COVID-19 cases in the league, the board decided to put the season on a pause, postponing the remaining 31 matches indefinitely.

A few weeks later, the BCII spokespersons announced the 2021 season will return in September/October, although not in India. With the world’s second-most populated country finding it hard to curb down the coronavirus pandemic, the board decided to move the season elsewhere.

The United Arab Emirates was picked as the destination for the remaining matches of the 2021 season. It’s not clear where exactly the remaining matches will take place. The same goes for the exact dates, which are yet to be decided. Still, the BCII did confirm that Phase 2 of the 2021 IPL is planned to start on September 17, with the final match to be played on October 10.

If you’re going to believe cricket betting sites in India, it’s going to be a fierce race for the title this year. There are four teams that seem like strong candidates for the title – Chennai Super Kings, Delhi Capitals, Mumbai Indians, and Royal Challengers Bangalore.

Those four were at the top of the IPL table when the season was put on hold. 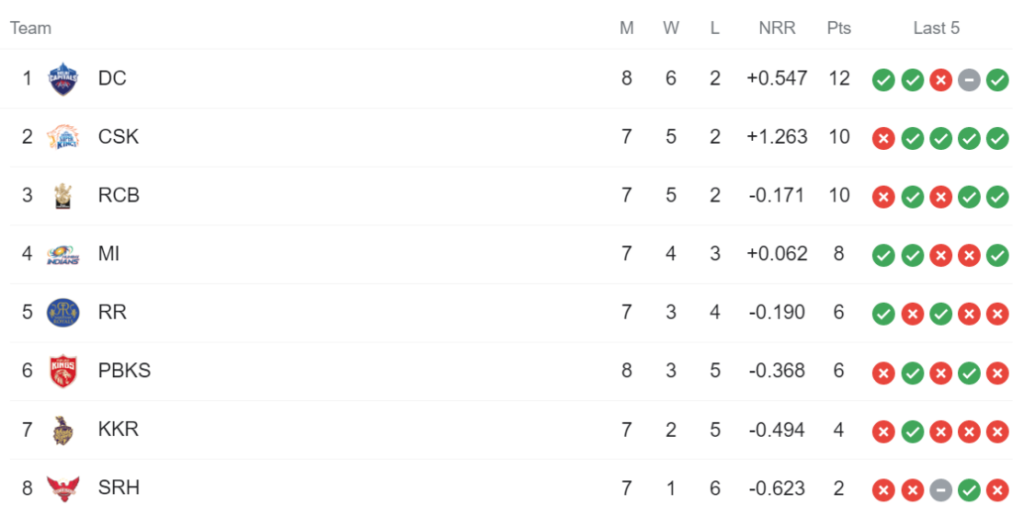 At the time of the season suspension, Delhi Capitals were at the top of the table with 12 points in eight games. Just behind were Chennai Super Kings and Royal Challengers Bangalore, both with 10 points collected from seven matches.

The defending champions of the IPL, Mumbai Indians are going into Phase 2 from the #4 place, with eight points after seven rounds.

The four top teams will qualify for the playoffs – the winner of the regular season and the runner-up will advance to Qualifier 1. The teams that finish in the #3 and #4 place will book their tickets in the Eliminator.

Eliminator is likely to be the first match of the 2021 Playoffs to be played. The match will see the teams that finished the regular season in 3rd and 4th position taking on one another.

The two top-ranked teams will play Qualifier 1, the winner of which will get a ticket to the 2021 IPL Final. This, however, does not mean that the loser of Qualifier 1 cannot get to the Final. That team will get another chance in Qualifier 2.

New IPL Schedule Could Cause Problems for Foreign Cricketers

The league officials are yet to announce the exact dates of the remaining regular-season matches, as well as the Playoffs games.

At this point, we only know that the season is planned to start on September 17 and end by October 10. As it falls on Sunday, it’s very likely that October 10 is going to be the day when the 2021 Final will take place.

The new IPL schedule could cause problems for some teams, especially those that rely on foreign players. The thing is that there are many national cricket teams that have their own plans for September and October.

For instance, England, Bangladesh, and New Zealand are supposed to play bilateral series during that period. These teams are also meant to play some warm-up matches meant to prepare themselves for the ICC T20 World Cup.

The same is the reason why Cricket Australia might decide to pull a couple of their players off the IPL Phase 2. In fact, according to InsideSport, there are at least two Australians who will not play in UAE – Steve Smith (Delhi Capitals) and Glenn Maxwell (Royal Challengers Bangalore).

Furthermore, there could be some problems regarding the players from the West Indies, who might be forced to miss out on the first week’s action of Phase 2. The reason is that the Caribbean Premier League (CPL) will conclude a few days after the return of the IPL.