Three of the Most Popular Winter Sports

A Closer Look at Three of the Most Popular Winter Sports

Winter is the time of year that permits a variety of outdoor activities and fun. A great thing about carrying out physical activity in the winter is that you can put in a lot of effort without dropping a bead of sweat. In some countries, winter means a bit of nip in the air, while in others it means a great white snow blanket. There are a number of sports that can only be played in winter, and in this article, we are going to take a look at some that are not popular worldwide but are popular in certain countries.

Ski jumping is a sport in which the competitors try to jump the furthest after speeding down a specially designed ramp on skis. Along with the distance of their jump, the competitor’s style as well as a host of other factors will determine what their final score is. Obviously, the participant that notches the highest score will be the one that wins the event.

Ski jumping was contested in Norway at the beginning of the 19th century, and towards the end of the century it spread across Europe (the countries that had alpine conditions) and then across the Atlantic to the United States. Alongside cross-country skiing, ski jumping is a traditional Norwegian skiing discipline. Other countries that love this sport include the likes of Austria, Finland, Italy, Sweden, Poland, Denmark, Germany, and Canada.

Since it is a traditional sport in Norway, it will come as no surprise to find out that there are plenty of talented Norwegian ski jumpers. One such talented ski jumper is Robert Johansson and in 2017, in a competition taking place in Vikersund, Norway, he broke the world record by jumping 827 feet (252 meters). However, he did not even hold this record for a day because it was beaten in the same competition when an Austrian, by the name of Stefan Kraft, jumped 832 feet (253.5 meters).

Ski Jumping was added to the Winter Olympics in 1924 and it has been part of the Winter Games ever since. However, women did not start participating in this sport until the 1990s, while it was not until 2014 that women ski jumpers participated at the Winter Olympics. All of the major ski jumping competitions are organized and regulated by the International Ski Federation.

While this sport mostly takes place in winter because of the ideal snowy conditions, there are actually ski jumping competitions that take place in the summer. How is this possible we hear you ask? Well, Hans Renner, a German athlete, invented plastic matting for ski jumping and the first ski jumping using plastic was tested in 1954. This has become popular in a few countries around the world, including Norway, and the world record currently stands at 395 feet (151 meters). Who knows, maybe one day we will see ski jumping at the Summer Olympics too.

Hocket is a sport where two teams compete against each other to try and get a puck or ball into their opponent’s net using a stick. There are different types of hockey such as field hockey, bandy, and ice hockey. For most of the planet, hockey means field hockey, but in places such as the United States, Canada, Sweden, Finland, Czech Republic, Latvia, and Slovakia, hockey is usually used to refer to ice hockey.

Since we are talking about winter sports, we are obviously going to focus on skiing. This sport is highly popular due to the fact that is a fast and physical game with brawls often breaking out. Ice hockey is Canada’s national winter sport, so it will come as no surprise to hear that they have the best national ice hockey team in the world. However, they do not have the best ice hockey league – that accolade goes to the United States and their National Hockey League (NHL).

Hockey, according to Finnish sports site suomiveikkaus.com, is the third most popular sport in the world with more than three million people taking part in it. Ice hockey, on the other hand, is play by just 1.6 million people around the world. However, despite this, field hockey has still been eclipsed by ice hockey as it has become one of the biggest and most popular winter sports and is broadcasted more broadly around the world. Ice hockey also has more fans than field hockey, believe it or not. 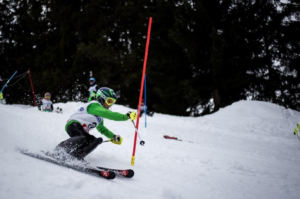 Alpine Skiing, also known as downhill skiing, is an event where you slide down snowy slopes on skis that have fixed-heel bindings. In other events such as ski jumping or cross-country, the skis have free-hill bindings. Whether it is done for a bit of fun or for sport, it is usually practiced at ski resorts that have other services such as ski lifts, snow grooming, and restaurants.

Skiing used to be used as a method of transportation, but it went on to become a sport towards the end of the 19th century. The first non-military competition for skiing took place in the 1840s in the north of Norway. The first national skiing competition in this sport was also held in Norway in 1868 by Sondre Norheim.

A couple of decades later, this sport spread across Europe and across the Atlantic to the United States, where miners would have skiing competitions to keep themselves entertained during the winter months. The very first slalom competition was developed in 1922 by Arnold Lunn and took place in Mürren, Switzerland.

Alpine skiing, for both men and women, debuted at the Winter Olympics in 1936. The only alpine skiing event for those games was a combined competition for slalom and downhill. At the 1948 Winter Games, this combination race was held once again, but separate slalom and downhill races were added to the program. Then, in 1952, the giant slalom was added to the program and then the super giant slalom was added in 1988, becoming the fourth separate skiing event at the Winter Olympics.

Above we took a look at three of the best winter sports – in our opinion anyway. There are many other really entertaining winter sports that you can find at the Winter Olympics and we have provided you with a list of some of them below just in case you want to do some of your own research on them:

Trust us when we say that all of the above winter sports that we mentioned will keep you highly entertained. The next Winter Olympics are due to take place in February of next year, so be sure to pencil it into your diary and check out all of the great sports that we just mentioned above.

You will probably be able to find all of the action on your television, but if you cannot then do not worry as there are plenty of great streaming services out there nowadays. Follow the link provided and you will find some of the best.