When it comes to the world of heavyweight boxing, it has often been the preserve of American fighters and with many a legend being based stateside, European based pugilists have often played second fiddle.

That was until the rise of the infamous Klitschko brothers and with the Ukrainian pair carving up the heavyweight division between them, their tenure as champions can be described as more akin to a reign of terror.

While such was their reign of terror, that backing either of these two to win in the ring, would be a sure fire way to make money with the sports betting sites and any wager against them, could only be considered as illogical.

However, all reigns must come to an end at some point and with both Wladimir and Vitali both being disposed of their prized possessions for differing reasons, a new era within the sport of boxing was soon to begin and one based in Great Britain.

That’s because when it comes to the latter of the two brothers, Vitali was at least able to end his career on a high and although he tasted defeat twice across 47 professional contests, he retired as the undefeated WBC heavyweight champion.

However, when it comes to Wladimir the story is not one with the same happy ending and after losing to British warrior Tyson Fury back in 2015, he would be disposed of a litany of belts around his waist. 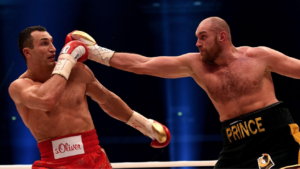 A collection that saw the WBA, IBF, WBO, IBO and The Ring belts all move over to the Manchester based fighter and there was to be more bad news two years later when facing off against Fury’s compatriot.

The man in question during that 2017 evening was none other than Anthony Joshua and with the Olympic Gold medallist being handed his toughest test of his career to date, he had all the answers for the legendary Ukrainian.

Answers that saw Joshua extend his perfect fight record to 19-0 and in doing so, he added the WBA and IBO heavyweight titles to the IBF belt that was already in his possession after getting the better of Charles Martin a year earlier.

While the respective victories for both Fury and Joshua cemented Britain as the new dominant force within the weight class and although there have been trials and tribulations since those crowning moments, the road to a super fight between the two is edging slightly closer.

The issues that plagued Fury are well documented and after being stripped of the many belts he won back in 2015, it was time to embark on his own road to redemption – one that saw him cross paths with Deontay Wilder in both 2018 and 2020.

In what proved to be a momentous clash in Los Angeles, it looked as if the then WBC champion was to lose his crown after seemingly being behind on the judges’ scorecards. However, Wilder unleashed a punch in the final round that offered a huge amount of salvation.

Salvation that saw his Staples Center foe hit the canvas and if anyone else had hit the deck in that situation, it would have been lights out and the preservation of Wilder’s exemplary professional record.

Then again, Fury is certainly not like everyone else and after somehow beating the count in desperate fashion, the now 33-year-old managed to see out the final few seconds of the 12th round in survival mode.

A mode that saw the two men have to make do with a draw and although there was disappointment for the returning British fighter, it meant that these combatants would do it all again in 2020 and this time, the story was completely different.

A story that saw Wilder simply outclassed and with ‘The Gypsy King’ learning from their first duel, there was absolutely no way he was not coming back to British shores without WBC heavyweight gold around his waist. 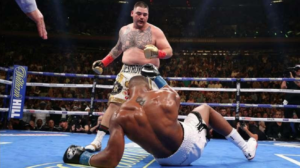 The belt that he still owns to this day and with domestic rival Anthony Joshua, still in possession of his multitude of trinkets (even if Andy Ruiz Jr. managed to earn himself a short-term loan in 2019), the discussion regarding a “Battle of Britain” is now getting somewhat louder.

Both men have to first clear Autumnal hurdles, with Deontay Wilder managing to subvert the roadmap and claim what he and an arbitration panel deem is a rightful rematch for the WBC heavyweight belt.

While Oleksandr Usyk has his eyes on the prizes that are currently owned by the 31-year-old Joshua and if both Brits can come out on top, then the fight that the boxing world has been crying out for will surely go ahead.

Then every major prize will be on the line and if there is a victor (assuming that there is not a draw on the scorecards), then the heavyweight division will see a truly unified and undisputed king finally become anointed.