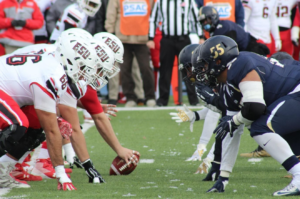 Watching football on the weekends is one of the favorite hobbies of all time and Americans love to support their team during big games. However, what new fans appreciated recently is how lucrative college football actually can be for their university. The best football teams in the United States enjoy the most profits and they are considered the most profitable collegiate entities in the world today. What’s more, there even exist NCAAF odds and lines on the best sportsbooks across the US.

Currently, the real question that rings through a lot of people’s heads across the US is—how can college football teams be profitable?

Essentially, the answer to this question will vary depending on the team in question. However, a general answer would be that the top 24 teams at Universities in the US gross their athletic department nearly $100 million every season.

Now that we have partially answered one question, another one becomes apparent—what sources of revenue contribute to the profits college football teams make?

The answer to this is that various forms of revenue contribute to the profits top Division I college football teams get to bag. To help you with this, here are a few sources of revenue and the role they play in the team’s overall ability to bag revenues for their athletic organizations.

Ticket sales are perhaps the easiest way for the top-grossing college football teams in the US to earn revenue. The National College Athletic Association (NCAA) stated that nearly $1 billion worth of football tickets were sold between September 2016 and August 2017.

It is a well-known fact that tickets for top Division I college football teams are pricey. What’s surprising is that die-hard fans are willing to pay the price just to see their favorite teams in action. Reports estimate that the average football ticket to a top Division I game costs around $100 to $450 depending on the type of game.

The average NFL ticket only costs around $90. So, you can easily find how universities are bagging millions just from the sold-out games. 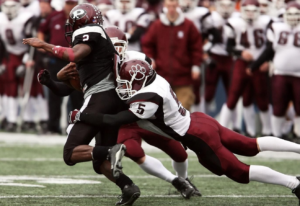 Next up, we have TV contracts. Almost all sports events across the globe sign TV contracts with channels that broadcast the game. Nonetheless, TV contracts aren’t much of a huge source of revenue for football games as many people think. However, it does bring in a reasonable amount of money for college football programs.

Several channels, both minor and major, show some of the biggest programs throughout the year. If we take into account the guaranteed games that happen in a year, around $150 million from it will go into the school’s pockets. The catch is that they have to pay nearly $70 million at the beginning of the season.

These sums account for over 200 contracts for games that will be broadcasted throughout the season. When it comes to the average game payouts, it ranges between $150,000 and $1.65 million, depending on the TV ratings and the teams playing.

Fans are always in search of new ways through which they can express their support for their favorite college football teams. And, buying athletic apparel has evolved to be one such way that allows fans to show their love and support for a specific team.

Now, individual players aren’t paid for their jersey sales. But, nevertheless, a part of the sales is given to their respective athletic clubs. Meaning, it can be considered as revenue for the entire event. What’s more, athletic apparel for the largest and the most special teams does tend to be a significant source of income for a university’s athletic department.

To conclude, top college football teams across the United States happen to help their respective schools make a huge amount of money. The athletic programs of every school get to tap into all that money. Whether it is to pay coaches and staff or offer players scholarships to help them pursue education, each athletic program can spend the money they gain through football programs as they see fit.

But as a rule of thumb, it is safe to say that football is still one of the most profitable college sports universities can leverage.