Are There Any Contender Horses For Triple Crown Win This Year?

There aren’t many more prestigious races on the American calendar since the Triple Crown races. These are the ones that move more money in the online betting sites and punters are always excited for the action.

The Triple Crown gets underway annually with the Kentucky Derby, before the Preakness Stakes and Belmont Stakes are run following the Run for the Roses.

History shows us that winning all three Triple Crown races is a difficult feat for a racehorse, but every year, trainers will believe that they have an entrant that can add their name to the illustrious group that have immortalised themselves by doing what many believe to be unthinkable.

So, could a horse reach that unlikely target in 2022? 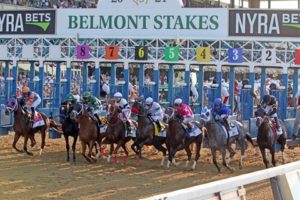 To date, there have only been 13 horses to achieve the unlikely feat of winning all three Triple Crown races. The first to achieve the feat was Sir Barton in 1919, but the term of ‘Triple Crown’ wasn’t used readily until four years later.

Gallant Fox was the next to achieve the feat in 1930, before Omaha and War Admiral both also won all three races before the turn of the decade. In the 1940s, four more horses achieved the feat, and they were Whirlaway, Count Fleet, Assault and Citation.

The most famous Triple Crown winner came in 1973, as the remarkable Secretariat took the world by storm. Seattle Slew and Affirmed were back-to-back Triple Crown winners in 1977 and 1978. However, the feat wouldn’t be achieved again until American Pharoah in 2015.

He also added more history by becoming the first Grand Slam champion of Thoroughbred racing after claiming success in the Breeders’ Cup Classic. He remains the only horse to have achieved that feat. Justify was the most recent horse to achieve the feat in 2018, as he retired with a 6-0 unbeaten record after winning the Belmont Stakes in is first race.

No Near Misses In Recent Years

For the past three years, there hasn’t been a contender that has come close to being the 14th horse to win all Triple Crown races. No horse has been able to win more than one of the Triple Crown races since Justify completely his dominant showing in 2018. Since 2000, six horses have won two of the three Triple Crown races, with the only one missing for all being the Belmont Stakes. War Emblem, Funny Cide and Smarty Jones all won two from three; missing the Belmont. While, Afleet Alex won the Belmont in 2005, but couldn’t win the Kentucky Derby.

Big Brown, I’ll Have Another and California Chrome are further examples of horses that have come close to capturing all three. Last season, Essential Quality was believed to be the leading contender to win all three races, but ultimately ended up just landing the Belmont Stakes.

He was unfortunate in the Kentucky Derby, as he got off to a poor start, which ultimately cost him and allowed Medina Spirit to claim a controversial victory.

Could A Horse Win The Triple Crown This Year?

It looks like a tall order for any horse to achieve the feat in 2022 given by the examples that we have seen in recent years. However, one horse that could stand a chance based on his runs at Belmont is Jack Christopher.

Should the three-year-old come back fresh following a minor injury and return to the form that saw him win the Champagne Stakes, then he could be the leading chance.

The Kentucky Derby looks to be the biggest challenge for him in the Triple Crown season, but victory at Churchill Downs could open up an unlikely opportunity for the horse trained by Chad Brown to join the legends of the sport.