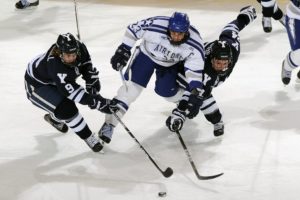 The 2021/22 NHL regular season recently passed the halfway mark with the Florida Panthers, New York Rangers, Colorado Avalanche and Vegas Golden Knights all leading the way in their respective divisions.

In this article we leave the fortune telling to fans and pundits and instead look back on some of the stand out moments of the season so far. Read on to find out what got the pulses racing in the first half of the 2021/22 NHL season.

In 1998 the NHL formed the Southeast Division to expand the Eastern Conference. In 2013 it was replaced by the Atlantic Division and the Metropolitan Division amid criticisms that the teams in the Southeast simply weren’t up to scratch.

Eight years on Tampa Bay, Carolina, Washington and Florida are flying high in their respective divisions. Tampa Bay are in search of their third consecutive Stanley Cup (surely a good bet) whilst Florida are looking formidable.

It really is an about turn for a group of teams and an area that was much maligned not too long ago.

We like nothing more than focusing on what happens on the rink, but sometimes there are things that happen that transcend the sport.

In October Kyle Beach – who currently plays professionally in Germany – revealed in an emotional interview with TSN that he was ‘John Doe 1’ in the sexual assault case against former Chicago Blackhawks coach Brad Aldrich.

What happened to Beach was disgusting and a blight on the game, but the bravery he demonstrated in talking about his experience was admirable. Hopefully Beach’s bravery not only shines a light on misconduct in professional hockey but emboldens others to speak out when they see inappropriate behaviour.

Kyle Beach’s bravery in speaking about his ordeal was extraordinary.

The Calgary Flames weren’t expected to be great shakes this season but they did manage to please their fans with an impressive start to the campaign. At the beginning of December the Flames occupied top spot in the Pacific Division and were fourth in the overall standings.

Their eye-catching form which was largely based on a firm defence and solid goaltending has since crumbled with the team now finding themselves well off the pace. But for a team that was tipped to flounder, there have been plenty of positives.

In March 2020 when the world was plunged into lockdown many us, quite naively, thought the whole thing would blow over in a few months. Nearly two years we couldn’t have been more wrong.

The virus has continued to wreak havoc on the sporting calendar with over 70 NHL games being postponed because of the virus.

In addition to that it has changed the way we have enjoyed the sport, but thankfully with recent news about the virus perhaps becoming endemic we can finally start to return to some level of normality. Hopefully in retrospect, that won’t be viewed as yet another naïve Covid-19 prediction!

In September Canadiens player Jonathan Drouin announced that his leave of absence from Montreal in the 2020/21 season was because of his battles with anxiety and insomnia. A few weeks later Drouin’s teammate Carey Price made the news when he entered the NFL/NHLPA player assistance program.

Taking to Instagram the goalie stated that he had entered the program to seek help with substance use which he had turned to throughout the years as result of neglecting his mental health. Whilst it’s never good to see someone struggling it is positive to see that both have sought help.

It’s also a positive for the wider population in general to see that mental health problems can affect anyone, even elite sports stars.

At the beginning of December the NFL Board of Governors approved the sale of the Pittsburgh Penguins to Fenway Sports Group. FSG who are headed up by American billionaire John Henry own the Boston Red Sox, English Premier League club Liverpool and NASCAR’s RFK Racing.

Penguins’ fans will be hoping that FSG follow the same model of ownership that they have displayed at Liverpool. When FSG bought the English soccer club in 2010 they were in danger of falling out of the reckoning at the top of the table.

12 years on they are undoubtedly one of the best teams in the world, thanks in large part to the Money ball style recruitment model implemented by FSG. Does that sound good to you Penguins fans?

Penguins fans could have this kind of transformation to look forward to.

If you ever want to start a fiery debate amongst NHL fans simply mention the name Evander Kane. The winger began 2021 by receiving a 21 game ban after violating the league’s Covid-19 protocols.

In addition to that he has faced accusations of betting on his own games and domestic assault from his wife. At the time of writing nothing has come from these allegations, but Kane’s conduct has and will continue to be a major topic of discussion going forward.