MOST INTIMIDATING FOOTBALL STADIUMS IN THE WORLD

Imagine visiting a cauldron of an atmosphere that sends shivers down your spine when you hear tens of thousands of supporters pour their heart and soul into making life uncomfortable for you and your team. There are a handful of such venues in the world that scream ‘GET OUT!’, posing an unwelcome environment for a healthy match-up. These are stadiums with an identity of their own, with fans as the lifeblood of the clubs they support.

According to the best online betting sites, leagues such as the English Premier League, Italian Serie A, Argentine Primera Liga, and Turkish Super Lig have supporters and stadium atmospheres like no other. With the aforementioned resource, one can gain a quick understanding of betting markets in UAE in particular, all the while enhancing one’s knowledge of placing hands and evaluating what sports to target. Players, whether old or new, can also benefit from a range of rewards such as free bets, loyalty points, cashback and accumulator schemes. 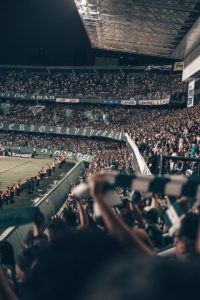 Photo by Emerson Vieira on Unsplash

The pandemic made it very evident that clubs are nothing without fans – often described as the irreplaceable 12th man. They create hostile, pugnacious, and intimidating atmospheres that can make oppositions go weak in the knee even before the ball is kicked. Pundits rank stadiums in Europe and South America as the best in the world and rightly so, given the fact that these two continents possess some of the most hardcore ‘ultras’ in football.

Naples’ very own Colosseum – many know it by the historic name of ‘San Paolo’. If Milan has the legendary San Siro and Rome has the iconic Stadio Olimpico, Napoli has the terrific San Paolo to boast about. In a country full of grand stadiums, this venue in the south of Italy particularly stands out to do the ferocious home support that does nothing but intimidate rivals. It is an arena for gladiators that reeks of days of yore with its crumbling walls and unnerving pathways, making for an uncomfortable setting in modern football

Also known by other names such as the ‘Marakana’ or ‘Stadion Crvena Zvezda’, Red Star’s oval-shaped open-air cauldron of a stadium is one that incites fear into visiting teams. The new stadium was opened in 1963 and it initially had the pleasure of hosting upto 110,000 spectators within its disc-shaped walls. Due to its large size, it was quickly compared to Brazil’s iconic Maracana, thus earning the nickname. It is the site of numerous memorable matches, including the 1991 Champions League semi-final between Bayern Munich and Red Star Belgrade which was particularly infamous for its massive celebratory pitch invasion.

La Bombonera literally translates to ‘The Chocolate Box’. Just like the name suggests, one does not know what to expect of the stadium due to its hostile and deafening atmosphere during matches and especially during Superclasico derby days against eternal rivals River Plate. The architecture of the stadium has been conjured in such a way that all the stands look like they’re practically vertical to the pitch, creating a frightening environment to visit as the noise reigns right down on the green pastures due to brilliant acoustics. ‘It doesn’t shake, its heart beats’ – such is the Bombonera’s stature.

Housing one of the largest single-tier stands in the world – the Kop – Anfield is truly an iconic stadium with a character of its own. It possesses some of the most vocal supporters in world football that make life truly difficult for visiting teams, owning up to its reputation as being the loudest home support in the Premier League, ahead of Manchester United’s Old Trafford. If words don’t convince you, just schedule 90 minutes of your time to watch Liverpool’s ecstatic 4-0 victory in the 2019/20 UEFA Champions League second leg encounter against Barcelona at Anfield Road, and watch an arena that’s truly alive and breathing.

As one of the most passionate supporters in world football, Dortmund’s home crowd are a sight to behold when in full flow during matches. Also known as the ‘Signal Iduna Park’, the legendary yellow-pillared stadium is famous for housing the Yellow Wall – the largest terrace for standing spectators in European football that can occupy approximately 25,000 fans. With its capacity of 81,400, Westfalenstadion is the largest stadium in Germany and one of the most terrifying venues to visit as a footballer and even as an away fan.

Imagine hearing 50,000+ spectators roar so loud that it makes the hair on the back of your neck stand straight. That is exactly what happened on March 18, 2011, when the (now called) Nef Stadium hosted eternal rivals Fenerbahce. Although they lost 2-0, Galatasaray fans didn’t hold back, registering a terrific decibel level of 131.76 – a world record that remains for football stadiums. To put that into perspective, anything above 130 is ‘painful & dangerous’, according to the American Academy of Audiology. Galatasaray’s stadium is a testament to how home support can truly charge and motivate teams.