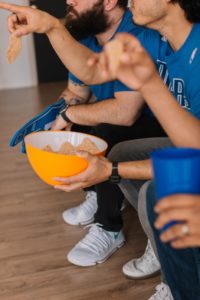 The Super Bowl is a nation-wide event that almost everyone in the U.S. watches closely. Most people either can’t find the tickets for the game itself due to the tickets being sold out almost immediately.

Others, on the other hand, prefer to watch from the comfort of their homes. That said, the Super Bowl championship game favors around 100 million television viewers on average each year. So what do people who watch the Super Bowl from home actually do?

Throwing a party during Super Bowl Sunday is an ideal opportunity to celebrate something other than football as well. After all, your neighbors won’t complain and the authorities won’t check up on you to tell you to tone it down. Therefore, if you’re planning on throwing a Super Bowl party, here are a few essentials you’ll need.

Did you know that the Super Bowl is the second-largest event for American food consumption, closely behind the Thanksgiving dinner? So yes, food is an obvious choice for the Super Bowl party but you can’t just stop at chips and dips.

Why not go a step further and make some barbeque as well. If the weather is particularly nice, you can have an outdoor party in your backyard. Everyone loves BBQ but make sure you have other options when it comes to food and snacks as well.

People will undoubtedly grow hungry during the game. This is especially true due to the suspense that keeps building up towards the end of the game. If you know football, then you know that anything can happen until the game is actually over. So keep your bellies full and your focus on the game.

Drinks and beverages complement food quite well. But which drinks are ideal for the Super Bowl event. Soft drinks and sodas are always welcome but people like to relax and have fun, which means they’ll expect something with alcohol in it.

You certainly won’t serve margaritas or mimosas because the Super Bowl is not a gala event or a corporate celebration. It’s a sports event. People get rowdy and loud when the thrill of the game hits them. Therefore, beer is your safest bet.

Beer doesn’t have much alcohol in it so people won’t get passed out drunk before eht half-time show even begins. Besides that’s not the point, anyway. Beer keeps the good mood and maintains good vibes just make sure someone doesn’t overdo it and the party will be legendary.

Every football fan is proud of their favorite team. Even if your team is not in the Super Bowl, it doesn’t mean you can’t show everyone which team you love the most. Moreover, you’ll be rooting for one of the teams in the championship so proper decorations are in order.

This will show everyone that you’re having a Super Bowl party, which is also the unofficial “Do Not Disturb” sign for everyone who might complain about the noise. What’s more, Super Bowl team decorations can also be a great disguise for a party that has a completely different purpose than the game itself.

Decorating your home is pretty much the closest thing you can get to actually being at the stadium where the game is held. Some football fans even throw outdoor parties at the stadium parking lot. There’s no rivalry or bad intentions between people rooting for opposite teams. Just good vibes and a very good reason to celebrate.

Throwing the Super Bowl party requires a lot of planning. This is especially true if you’re inviting people over. Therefore, make sure you stockpile necessities days or even weeks prior to the game because convenience stores tend to sell everything they have in stock to football fans who have the same idea as you do.