Who Are The Best College Basketball Stars Right Now?

When it comes to finding the next big NBA player there are a few options you can explore; some come via the G League, some come from the European circuit but most come out of the NCAA system.

Here we are going to focus on the latter as we take a look at the best college basketball stars right now. Let’s get into it.

Kicking off our list of the best basketball college stars is Shaedon Sharpe; he is someone that has been flying under the radar for a little while meaning there are plenty of fans who don’t appreciate him – yet! The shooting guard, who has only recently joined Kentucky, has launched himself into the top five conversations after not even getting ranked in the top 50 a year beforehand.

He is a very strong guard that has the excellent body control and dunking ability in the air. That all said, he does have one problem in that he is a bit of a wild card. There are scouts out there that believe he will be the first guard taken in the draft, then there are others that don’t expect him to be drafted in the lottery at all. If Sharpe can find some consistency then he’ll unquestionably be taken in the draft – and he’ll go high too. 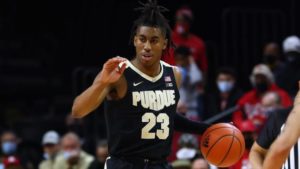 Next up on our list is Jaden Ivey. Ivey is a stellar guard that has shown the ability to play both ends of the floor well. The 20-year-old Purdue athlete has also shown a lot of athleticism and scoring punch that makes him a viable option for a lot of teams in the lottery in this upcoming NBA Draft; he is averaging a highly respectable 17.4 points per game.

Early indications are that scouts believe he has a skill set that should translate well across the board to the NBA level. Some people have Ivey ranked higher up on their lists but, for our money, he needs to show his strong play a little more consistently to really climb up the draft boards.

Breaking the top three of the best college basketball stars right now, according to the Bovada NCAA lines and betting odds, is Blue Devils man Paolo Banchero. He was actually ranked a little higher than number three earlier in the season after a few explosive showings.

His rebounding in particular stands out with an impressive average of 8.7 per game. Since those early performances though, he has dipped ever so slightly due to a) some concerns regarding his health and b) his three-point shooting ability. Lately, though, he has started to improve on all the areas that you would consider his weaknesses. His playmaking looks far better and his three-point shot conversion is starting to come on as well. If Banchero can put together a strong tournament run for Duke, then he could easily jump up another spot or, maybe, even two.

Taking the silver medal here Jabari Smith. He is a player that has really shot up the draft boards in recent weeks. Smith was barely in the top 10 at the start of the campaign but his performances have propelled him into the number one overall pick conversation; he deserves huge respect for that. Like most of the names on our list, Smith still has some work left to do but things like his recent 25 point, four block game against Alabama showed his potential though.

We also can’t forget his offensive skill. He shoots 44.2% from three-point range and consistently knocks down pull-up jumpers and fadeaways. Smith has all the makings of a top scorer in the NBA while also providing excellent defense on the other end. He’s a no-brainer of a pick for most teams.

Now we come to our number one pick, so, drumroll, please. Topping our list of the best college basketball stars right now is Chet Holmgren. In all honesty, this was an easy selection to make as well; we do not care what anybody says, he is without a doubt the most talented player in college basketball at this moment in time.

His high school years were fully loaded with success and awards. He has carried that success over into the college scene with Gonzaga. The seven-footer has great shooting range but is also ridiculously efficient in the paint on both ends of the floor. He shoots an unbelievable 73.2% on all two-pointers and averages a whopping 3.3 blocks per game. You just don’t get this level of talent very often at the center position. Watch him run rampant when his chance in the NBA comes.

Here you have it, the best 5 NCAA players right now. All in all, it will be a March Madness to remember and we already have a few reasons to salivate for the upcoming NBA Draft!