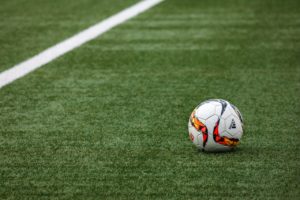 Formerly known as the Football Association Challenge Cup, the English FA Cup is an annual domestic football tournament founded over 150 years ago that runs alongside English league football. Many people don’t realize how enormous the FA Cup really is – not only is it the oldest national football competition in the world but it is also open to almost every tier of the English football league. In the 2020-21 tournament, more than 750 individual teams competed for the Cup, with 32 teams eventually progressing to the televised stages. Leicester City is the current FA Cup Champion following their 1-0 victory against Chelsea at the 2021 Final.

With so many teams it is unsurprising that the FA Cup takes several months to play out in full. The 2021/22 tournament kicked off in August 2021 with two preliminary rounds and four qualifying rounds completing over the next two months. The “proper” rounds then begin with one round per month between November and March.

This is the first quarter final fixture of this year’s tournament and will be played on Saturday 19th March – one day earlier than the other three games. Middlesbrough play in the second tier of English football whereas Chelsea is a Premier League team, so is no surprise to see the odds so heavily stacked in Chelsea’s favour.

Could Middlesbrough cause an upset here? It’s possible, but probably not likely. The team has already done phenomenally well to make it this far into the tournament, so will be returning home to Middlesbrough as heroes regardless of what happens on the day.

The first fixture of Sunday 20th March will see Londoner’s Crystal Palace take on Liverpool’s Everton in a game that the bookmakers currently have priced more or less neck and neck. Both of these teams currently play in the Premier League, with Crystal Palace currently sitting in the middle of the table whilst Everton are a little lower at 17th place.

This sounds like a bigger gap than the odds would suggest, and that’s because it is; Everton have currently only played 26 games to Crystal Palace’s 29. With 12 points currently separating the two teams, it isn’t inconceivable that Everton could begin catching up on Crystal Palace as the league continues. And back to this match – it’s very difficult to pick a winner here, and we expect this to be a close one.

At 3pm on Sunday 20th March we’ll get to see the current favourites Manchester City take on Southampton in what is sure to be a tough game for the Southern team. Manchester City are the current Premier League champions and have been smashing it in this year’s league games as well, sitting at the top of the table with 70 points after 29 games played.

Southampton have also played 29 Premier League games so far this year and are currently halfway down the table in 10th place. The team has just 35 points – half that of Manchester City – so there is no question they have a fight for their hands to stay in the FA Cup past this Quarter Final game. We wish them luck, but the smart money is clearly on City.

Sunday’s last game will take place at 6PM UK time. Nottingham Forest did well to get this far, having been matched with last year’s champions Leicester City in their previous game. Nottingham put on an inspired performance, soundly defeating the champions in a convincing 4-1 victory. Despite that performance, their opposition here is sure to be even tougher and the bookmaker’s odds suggest this may be where we see Nottingham’s journey end for the 2021/22 tournament.

Liverpool are one of the strongest teams in the North of England and are currently the second favourites to win the Cup right behind Manchester City. It feels like a tough break sometimes when you see pairings such as this one or Chelsea vs Middlesbrough, and yet this is possibly the most exciting game that will take place on Sunday. If Nottingham Forest pull off a second extraordinary upset in a row, wouldn’t that make for some amazing television?

We definitely think so.