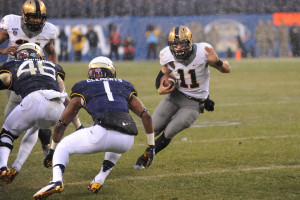 131214-D-FW736-032 — Lake Bluff, Ill., native A.J. Schurr scrambles with the ball during the 114th Army-Navy game at the Lincoln Financial Field in Philadelphia, Pa., Dec. 14, 2013. The Navy won 34-7, extending their winning streak against the Army for the 12th straight year. Schurr, a graduate of Libertyville High School, Libertyville, Ill., is a quarterback for the U.S. Military Academy Black Knights in West Point, N.Y. (Department of Defense photo by Marvin Lynchard)