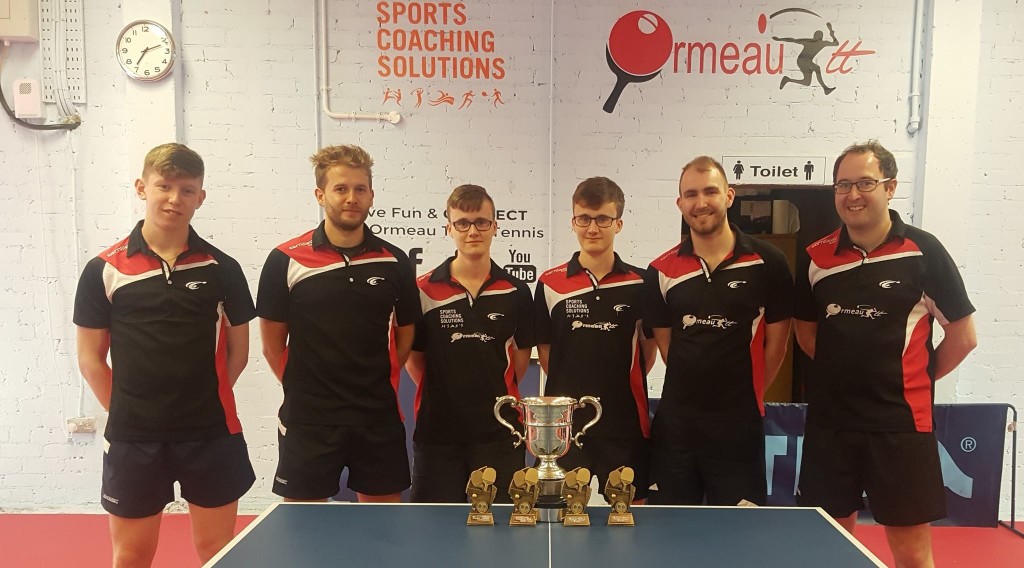 Ormeau Table Tennis is excited to announce their Senior British League debut with the entry of a team into the Premier Division for the 2017/18 season.

The Senior British League is the leading club team competition across the United Kingdom. It comprises some 120 teams playing across 10 divisions, with Premier Division positioned at the top. Ormeau, based in Belfast, is the first club in Ireland to field a team at such a high level.

“…it is apparent that Ormeau will be a worthy contender within the Premier Division of the Senior British League.” CHRIS DANGERFIELD (BRITISH LEAGUE CHAIRMAN)

On welcoming Ormeau, British League Chairman, Chris Dangerfield, said, “with the calibre of team they propose to play it is apparent that Ormeau will be a worthy contender within the Premier Division of the Senior British League. Their introduction to the League complements the geographical spread of the top-level teams from England, Scotland and Wales who are already competing in the Premier League”, he added.

In both 2015 and 2016, Ormeau was awarded Club of the Year by Table Tennis Ireland (Ulster Division), who recently described Ormeau as “an outstanding club”. In 2016 founders Gervis and Keith Knox were jointly named as Male Coach of the Year.

The season will start in October 2017 and run through to May 2018. Ormeau will play a minimum of 10 matches, half of which will be home fixtures at Ormeau’s own dedicated facility in Belfast. At the end of the season, the top teams will progress to the Grand Finals on 2nd June.

“History is about to be made here at Ormeau and we are confident that we will deliver showcase table tennis to the many fans within Ormeau and from further afield. We have no doubt that it will prove to be fantastic for the club and table tennis in the country.” KEITH KNOX (HEAD COACH, ORMEAU)

According to Ormeau Team Captain, Keith Knox, “Ormeau’s entry into the Premier Division of the Senior British League is unprecedented”. He went on to say, “it is a testament to the hard work and dedication put in by the club that it can assemble a team worthy of competing at such a high level. History is about to be made here at Ormeau and we are confident that we can deliver showcase table tennis to the many fans within Ormeau and from further afield. We have no doubt that it will prove to be fantastic for the club and table tennis in the country.”.

All matches will be hosted on a Saturday, meaning there will be an opportunity for local fans of all ages to watch professional-level match play.

“We’re investing in the future of our up-and-coming players by exposing them to a much higher standard of play than can be found locally.” GERVIS KNOX (HEAD COACH, ORMEAU)

Gervis Knox, Head of Coaching at Ormeau, commented, “Ormeau is delighted to be bringing table tennis of the highest level to Belfast. By doing so, we’re investing in the future of our up-and-coming players by exposing them to a much higher standard of play than can be found locally. Our aim is to inspire the next generation and further nurture their talent as they progress within the club”.

With this amazing advancement for the club comes significant costs which are currently being placed upon the club and the players themselves. We hope with this crowd funding page you will realise the difference we are trying to make to table tennis in Ireland and that you will consider donating to our cause. We want our club and players to focus on the playing and not the continual financial burden we know all too well.

Below are only a few of the items we must consider:

As you can appreciate there are significant costs, but we want the best for our players. Don’t they deserve it?

Do you own a business?

Ormeau Table Tennis Premiere team are searching for a team sponsor. We offer fantastic packages and we work very hard to ensure our sponsors get the recognition they deserve. If you want your logo on our Shirts, Dedicated Facility & PR documentation please get in touch. Your contribution will make all the difference!

Coaches Of The Year

Our star player on the men's British league team Owen (Aged 15) was ranked at World Ranking No.22 in Under 15s. This was a historic ranking for any Irish player!

Ormeau Table Tennis is open on a full-time basis with 6 coaches working with over 200 players from all ages and genders.

Get your company / business logo on our wall + social shout out
0 taken.