Here at the Gaelic Masters Association not only are we Gaelic footballing old dogs, we are also stray dogs!

Masters Gaelic Football for over 40’s has been played in Ireland as an Inter County competition since 1990. For the first nearly twenty years it was organised and run by the GAA. In 2010 the GAA  withdrew their support.

Refusing to accept they were over the hill and realising the physical, mental emotional and social benefits of continued sporting activity Masters footballers from around the country rallied together and formed their own organisation the Gaelic Masters Association to promote our games. From humble beginnings a few short years ago in 2012 we have gone from six counties competing to twelve this year Mayo, Galway, Longford, Leitrim, Sligo, Westmeath, Ofally, Tyrone, Cavan, Monaghan, Antrim, Donegal with further teams set to join in 2017.

This year we are adding a new dimension to our games by hosting a touring Australian team who will play an Irish selection in two Test Matches this October one in Galway one in Cavan. The teams will compete for the Paddy Gaffney Memorial Cup in honour of former Irish Masters footballer Paddy Gaffney from Cavan.

Players and teams have to fund all costs of playing the game we love including insurance, playing gear and equipment, facilities, referees etc. Hosting the tour is placing a significant added financial burden on our members so we are seeking outside support from both individuals and businesses.

We know we have the support of all true grass roots Gaelic fans and we are hoping you will demonstrate that support by making a donation and/or sharing with your friends.

The underdogs in the Gaelic Masters Association have shown tremendous resilience and spirit in going from near extinction to a thriving organisation and community in a few short years, help us keep growing and promoting our sport and healthy active ageing.

Finally, another difference here at the GMA is, we’re not just in it for ourselves.

GMA = Give Money Away

In recognition that health and specifically mental health is one of the primary benefits of continued physical activity the GMA will donate a minimum  20% of all funds raised to mental health charity Aware.

Aware is a charity close to our hearts  because men of our age group are particularly at risk for mental health issues and we have long promoted not just the physical but the mental health benefits of healthy active aging- ‘With Support Groups nationwide, a Support Line and Support Mail service, as well as education programmes for teenagers aged 15-18; Life Skills programmes for adults, and Wellness@Work education and training options.

Aware works hard every day of the year to ensure that mental health remains a key focus. They rely on events like these as well as corporate and public donations for 85% of their annual funding.  For further information please visit www.aware.ie ‘ 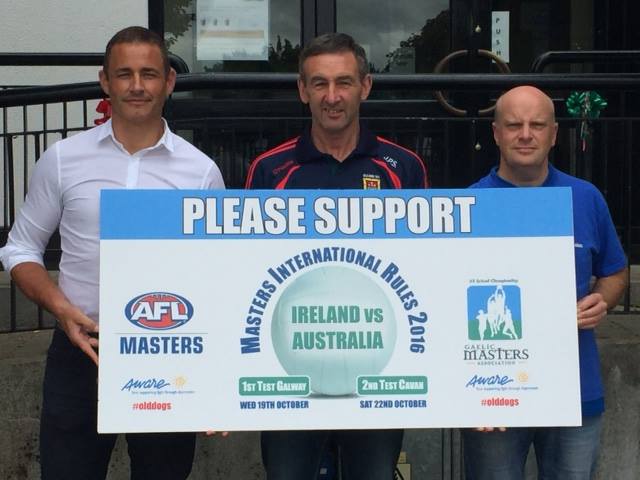 Still playing We are still playing competitive football to a reasonably high standard, despite our advancing years, and managing to interest and entertain ourslelves and our supporters. We are also growing our organisation, despite many obstacles and our achievements have been recognised in a number of ways: Finals shown live on Irish TV Mayo Masters team honoured with 2015 National Pride of Place Award Galway Masters won 2014 Galway Bay FM Team of the Year after third successive All-Ireland triumph Tyrone Managers Eugene Bradley and Joe Leonard honoured with Ulster GAA Writers award in for winning 2015 Irish TV All Ireland Masters. Masters footballers are an inspiration towards healthy active aging, demonstrating the physical, mental and emotional benefits that staying active brings.

We officially launched our fundraiser less than a week ago and we are delighted with the support we have received so far. We also have had great coverage of our launch including on the Hogan Stand website http://www.hoganstand.com/overseas/ArticleForm.aspx?ID=260661 and Galway Bay FM http://galwaybayfm.ie/clonberne-host-masters-international-rules-test/ Still work to do to make inroads into our target but so far so good with your help we'll get there. Keep liking and sharing. Thanks

For your €5 you have our undying gratitude and promise that your money will be put to good use promoting our games and healthy activity in general as we age. To show our appreciation we will give you free admission to either the Galway or Cavan Test. In addition a minimum of 20% of funds raised goes to benefit Aware.
1 taken.

For an even more generous donation of €10 you will receive two free tickets to either one of the two 2016 Masters Football International Rules Test Matches to be played on 19th and 22nd October in Galway and Cavan respectively.
4 taken.

For a spectacular €20 you will receive two free tickets to both 2016 Masters Football International Rules Test Matches to be played on 19th and 22nd October in Galway and Cavan respectively. We will even throw in a souvenir program.
11 taken.

For a whopping donation of €60 you get admission to both Test Matches, souvenir program and an O'Neills Ireland Team polo shirt which has been specially commisioned to commemorate the Tour.
5 taken.

A group pass for up to 5 people to either of the Two Test Matches and a quarter page advertisement for your business in our souvenir Tour Program and acknowledgement of your support across all traditional and social media.
3 out of 20 taken.

A group pass for up to 10 people to either of the Two Test Matches and a half page advertisement for your business in our souvenir Tour Program plus acknowledgement of your support across all traditional and social media.
2 out of 10 taken.

A group pass for up to 10 people to both of the Two Test Matches and a full page advertisement for your business in our souvenir Tour Program and All Ireland Masters Final Program plus acknowledgement of your support across all traditional and social media.
0 out of 10 taken.

A group pass for up to 10 people to both of the Two Test Matches and a full page advertisement for your business in our souvenir Tour Program and All Ireland Masters Final Program plus acknowledgement of your support as a brand partner across all traditional and social media, high visibility and acknowledgment at all events, matches, functions and social. This will bring massive exposure through all forms of media and an opportunity to positively associate your brand with both the Gaelic Masters Association and Aware
0 out of 2 taken.
Support Choose your own payment