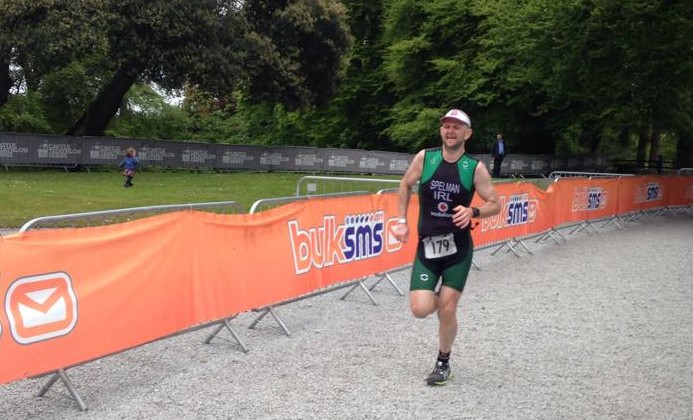 Help Diarmuid get to the World Long Distance Triathlon Championships in Motala, Sweden

My name is Diarmuid Spelman, I am a 31-year-old triathlete from a little place called Kinnitty in County Offaly, at the foot hills of the Slieve Bloom mountains (they are great fun to train in).

This year is my first year at Age Group International Triathlon Racing. Having finished 2nd in the Shadowman Triathlon last year I have qualified for and been selected to represent Ireland in  the Age Group ITU World Long Distance Championships in Motala, Sweden on June 27th (4km Swim, 120km Cycle, 30km Run) and the ETU European Long Distance Championships in Weymouth, England on Sept 13th(3.8km Swim, 180km Cycle, 42km Run)!

I took up triathlon in 2010 and was instantly hooked! In my first year I completed a couple of short distance triathlons (on a bike borrowed from a friend).

In my second year I completed in the Triathlon Ireland National Series and finished just outside the top 100 in the country, which wasn’t a bad achievement considering I wasn’t paying any particular attention to training at that time.

In 2012 I started concentrating on long distance triathlon, I began using structured training and started to make big improvements. In 2014 I needed to finish in the top five in my age group in Shadowman to qualify for the above championships, I managed to finish second overall! Qualified!

This year under the guidance of Mark Dempsey (Competitive ITU Coach),  my training has really progressed again, as I demonstrated recently with a fifth place finish in the 2015 Intervarsity Championships being narrowly beaten by some of the best short course international triathletes in the country.

My training currently consists of approx 18 hrs a week, broken up into 3 hrs swimming, 8 hrs biking, 4 hrs running and 3 hrs gym work. Along with training full-time I am studying for a postgraduate diploma in accountancy and working part-time as a swim instructor, fitness instructor and lifeguard.

However none of this comes for free and unfortunately there is no government funding or schemes which can be received by a triathlete like me.

On realising that this is self-funded by myself, a number of people have volunteered to raise funds to get behind me in my quest to compete and represent both community and country in the upcoming championships.

Diarmuid’s 200 Club has been set up to try raise the money. We have set up a Facebook page following this journey and to show gratitude to those who kindly offer their support.

Any and all help would be so greatly appreciated and allow me put in that extra effort which will hopefully lead me to a podium position come June and Sept!

Be listed as a supporter on Diarmuid's 200 Club Facebook page.
18 taken.

€50 Be more than Just a supporter

Be listed as a supporter on Diarmuid's 200 Club Facebook page and get monthly updates on training and race reports from the big events.
Be more than just a supporter, follow the mission!
8 taken.

A one-to-one training session with myself.
2 out of 3 taken.

Let me be a Brand Ambassador for your company, with your company logo on all my race gear and my company for special appearances.
0 out of 1 taken.
Support Choose your own payment