ABSOLUTELY fantastic news today when a humble, talented, athlete that used crowdfunding to fund his bid to make the Zimbabwe Rio 2016 team did just that!

That is what it is all about guys, that’s why we’re online and why you’re reading this story: to help athletes fulfil their dreams – they have the physical and mental strength, it’s usually just time and money stopping them. 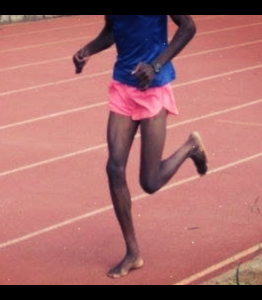 Pardon Ndhlovu is stopped no more. This wonderful character has been selected by the National Athletics Association of Zimbabwe to run the men’s marathon at the Olympic Games in Rio de Janeiro, Brazil, in August.

They had five athletes to choose from and Pardon will be the only first-time Olympic competitor in the three-strong finalised line-up, that also includes London 2012 runners Wirimai Juwawo  and Cuthbert Nyasango.

Pardon’s story is one of dedication and sacrifice, but also joy, like the day a US coach gave him his first pair of shoes – in Africa he just ran barefoot.

“I am humbled and honoured to have been selected to represent my country,” he told a local newspaper. “I know it comes with great responsibility and I am ready to take the challenge.

“I am fortunate enough to have been named with two other Olympians and I am looking forward to learning from their experiences, since they have been to the Olympics before. I am excited because competing at the Olympics is not an everyday thing, and I would like to thank NAAZ and ZOC for having faith in me.”

His journey to Olympic qualification proved what a naturally gifted runner he is. He just missed qualifying for the Olympics in 2014, then in January 2015 he finished 10th on 2:16:51 in the Houston Marathon, making him the first Zimbabwe runner to qualify for the Olympics

In December, he graduated from Augusta University with his MBA. Since then, he’s been working at Fleet Feet Sports and continuing his training.

Speaking to his local church, Stevens Creek, in this heartwarming short film, Pardon Ndhlovu talks about his father encouraging all his five children to start running, ‘because it was the most inexpensive sport’, and of his dream to make it to the US.

A dream which came true for all the right reasons. Introducing Zimbabwe’s newest Olympian: