Pardon Ndhlovu – One Milestone At A Time

Pardon Ndhlovu is a Zimbabwean Olympian and former PledgeSports athlete who has lived an incredible and unique life to date. In our first edition of guest blogs, the 29 year-old tells of his remarkable, inspiring story and the milestones he has achieved along the way. Enjoy! 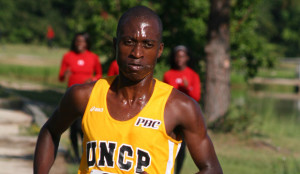 If I was to sum up my story in three words I would chose: patience, persistence and progress. It wasn’t an easy road to walk on to get where I am today. I grew up in a middle class family, my dad is a police officer and my mom is a housekeeper. My parents always strived to provide everything we needed for us to excel in school and they valued education so much that when we got bad grades, you knew that the conversation wasn’t going to be pretty when you got home to discuss your “end of the year report” .

Failure was not an option in my dad’s eyes and he made it known to us. Even though my parents didn’t go to college they understand the importance of education and did everything in their power to see us do well academically. The most they did was to provide the resources and the rest was left to us. I believe, my parent’s view has been my motivation to succeed and be the best person I can be to make them proud. 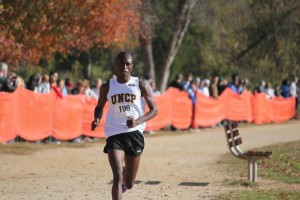 My brother and I started running when we were 13 years old, he used to be faster than me in primary school but that later changed when we got to high school. My dad encouraged us to join the police athletics team as a way to find out what we were really good at. We couldn’t play soccer, so running became an outlet to what the world had to offer. We lived in a police camp and we were only exposed to the things that were in the camp. Now looking back at it, it was like a cage and we were just limited to seeing the walls around. There was another world out there waiting to be explored and there were opportunities out there that were waiting to be realised.

In high school, I ran so well that I started travelling, meeting athletes from other schools and going to other cities to compete. Sometimes I felt inferior standing on the starting line with athletes from private schools wearing shoes as I was barefooted. Instead of looking at it as a disadvantage, it became motivation to beating them in races.

I went through my mom’s canvas shoes like no man’s business, she gave them to me sometimes because she felt sorry for me when she saw bloody blisters from every run I did. I ran in those shoes until the bottom fell off, it was same as running barefoot. My school supported my talent by financing my trips to represent Zimbabwe in regional races and my teachers offered tremendous support in making sure I caught up with the class assignments when I was absent.

My success in running at high school motivated me to be better. I trained by myself in high school because no one was motivated enough to run all year. Usually after cross country season in February running stops for most athletic programs but because of my success I was introduced to club racing that took place until October.

In 2004, at the conclusion of my Secondary School Studies, I heard about scholarship opportunities that were offered by colleges in the United States. There is a major disadvantage that exists in public and/or poor schools in Zimbabwe, that is the lack of accessibility to information. Since I did not know what I wanted to do after high school, going to the United States became my goal. I wanted to go to a NCAA D1 school because I was athletically talented enough to compete at D1 level but the obstacle in my way was that my grades were not good enough for D1 schools. 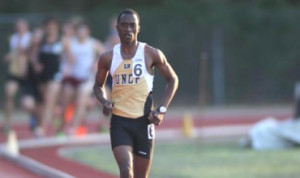 I graduated high school in 2006 and spent the next two and a half years looking for colleges that were willing to offer me an opportunity to be part of their program. I wrote SATs five times; not because I was not smart to get in college but my focus was to attend D1 and with a 2.0 gpa, I needed high SAT scores.

In early 2009, I got accepted to attend the University of Idaho with the help of friends but I did not go to that school because I failed to meet NCAA Clearinghouse requirements.  Instead the coach from University of Idaho asked me to write SAT for the sixth time. My mom had gone through a lot to get me to write SATs the first 5 times and I wasn’t going to do it the sixth time, so I shifted the focus to apply to D2 schools, which I could have done in 2007 and got into school early. 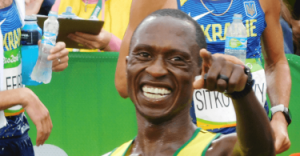 This period of waiting tested my patience, I even stopped running for almost a year because I didn’t see the point in pursuing a goal when you can’t see the bright light at the end of the tunnel. However, inside there was a voice that told me to keep on looking, and on the 15th of June 2009 I landed in the United States at the University of North Carolina at Pembroke ready to be the best person I can be in all aspects of life. 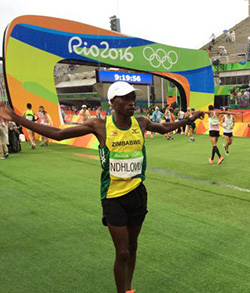 After concluding my undergraduate degree, I went on to pursue a master’s degree in Business Administration at Augusta University where I served as a Graduate Assistant Coach for Cross Country, Track and Field. While I was at Augusta University, I was also training to qualify in the marathon to represent Zimbabwe in the 2016 Olympic games in Rio. On the 21st of August, I ran a marathon in Rio wearing my Zimbabwean colors and finished 41st among some of the best marathoners in the world.

Running has opened a lot of doors for me, it has provided a means for me to pursue my academic career and compete at the highest level possible for my country. I look at running as an outlet that has opened the doors to what the world has to offer. If it wasn’t for running, I wouldn’t be telling you about my story right now.

Now that I have competed at the Olympics and I am an Olympian, the questions remains, what next? As far as my running career is concerned, I am still running at an elite level, trying to put myself in a position where I can get to the next level of competitiveness in my career. That means, I am still looking for shoe and apparel sponsorship to enhance my career. I am relocating to North Carolina from  Georgia, so I can be close to my coach and train with a group of athletes that can push me to the next level.

I will be running the Boston marathon this April, my second major marathon following the Olympics. World Championships in London are this summer, the goal is to put myself in a position to represent my country at the games. I have competed in the Olympics once and I loved it, I want to compete in the Tokyo Olympic Games in 2020. So, every training that is done now and some years to come is focused on getting me ready for Tokyo 2020.

Giving Back To Zimbabwe 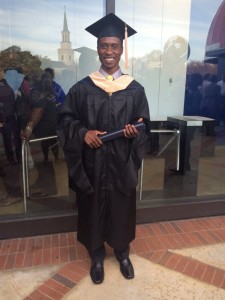 Apart from running, I am working on establishing a non-profit organization that is aimed at providing life changing opportunities through education for under-resourced students in Zimbabwe to excel in school. The focus is to emphasize the importance of education early on so that students/ student athletes are provided with a solid educational foundation. The educational resources will include, but not limited to scholarships used during primary and high school to cover school fees and tuition, books and uniforms.

In addition to receiving assistance for the basics of attending school in Zimbabwe, children also receive running equipment and take part in mentorship programs where they receive encouragement, guidance and direction for their desired careers. I know there are a lot of kids that are talented from my community but they are not exposed to information about the opportunities that their talents can provide for them. Sometimes it is not about talent but it is about how hard one is willing to work to change their situation.

I want to be a resource for the Zimbabwean talent that otherwise would not get the opportunity to use their talents as a vehicle to pursue education in the United States. It is my dream to help kids back home with the same opportunities that I got. I have seen what difference knowledge can make and I have been fortunate enough to have the experiences I have had in my life thus far.

Got something you would like to write in a guest blog for PledgeSports? If so, we would love to hear from you. Please get in touch via info@pledgesports.org or contact us through Facebook @PledgeSports

Are you or your team looking to fundraise? Get on to PledgeSports now and hit “Create A Campaign” to get started!