Roger Federer is one of the most iconic and successful athletes of all time. After an 18th career Grand Slam at the Australian Open in January, Federer lifted his fifth Indian Wells trophy and 90th career title on St. Patrick’s weekend.

This article has been updated again after Federer’s recent Wimbledon win.  You can read the updated article here

We take a look at the astonishing numbers behind the35-year-oldd Swiss’ legendary career. 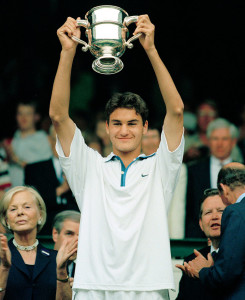 Federer’s main accomplishments as a junior player came at Wimbledon in 1998, where he won both the boys’ singles and doubles titles. Federer ended 1998 with the No. 1 junior world ranking.

While trying to make his pro breakthrough, Roger Federer reached was the 2002 Miami Masters event, where he lost to Andre Agassi on hard court. Federer won his first Master Series event at the 2002 Hamburg Masters on clay, over Marat Safin; the victory put him in top 10 for the first time.

Did you know that tennis players are the fittest athletes on the planet? Check out why! 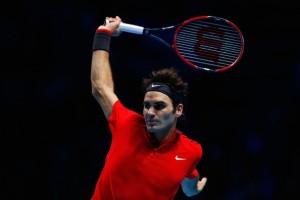 Roger Federer has played in more Grand Slam finals – 29 – than any other player in the Open era.

Roger Federer is one of only 8 men to win each of the four major tennis titles. In addition, he has reached each Grand Slam final at least five times each.

Beating depression is just 1 of 10 great reasons to play tennis – here are the other 9!

Greatest Of All Time 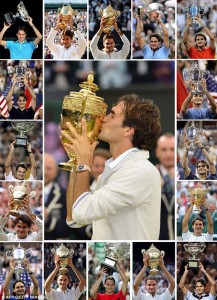 Roger Federer has the most major wins of all time with 18 singles tournaments to his name (7x Wimbledon, 5x US Open, 5x Australian Open, 1x French Open). Next to him are Rafael Nadal and Pete Sampras, each with 14 major wins.

On Top Of The World

The silky Swiss native holds the record for longest time spent as the world’s No.1 ranked tennis player – an eye-watering 302 weeks. He hasn’t held the top spot since November 2012.

At 35, Federer is still at the top of his sport – see what other athletes are flying the flag for the over 35’s! 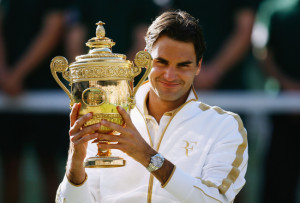 In the summer of 2012, Federer won a record-equalling 7th Wimbledon singles title. This victory matched the records held by his childhood idol, Pete Sampras, and 1880’s star William Renshaw.

Roger Federer is only the second tennis player in history to have made $100 million in career earnings. The first player to do so was Novak Djokovic. 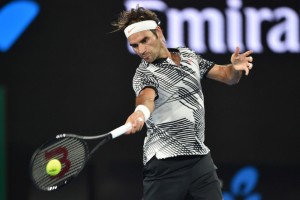 Roger Federer has won the season-ending ATP Championship a record six times. His last victory came in 2011, despite making the finals in 2012, 2014 and 2015. 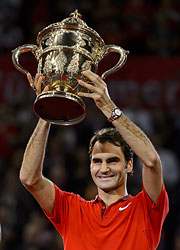 Of his 88 singles titles, Federer has won his home tournament in Basel a record seven times. This is the same tournament where Federer spent his childhood as a ball boy.

Federer has won one Olympic Gold Medal and one Davis Cup for Switzerland. His Olympic gold coming at the 2008 games in Beijing where he and Stan Wawrinka won the doubles event. His Davis Cup triumph came in 2014 when he helped the Swiss team to victory over neighbours France.

In 2007, as Federer challenged for his fifth Wimbledon title, Nike produced an advert narrated by Tiger Woods. In a battle of “I’ve got more majors than you”, this video shows how the sporting tables have turned over the past 10 years and how Federer’s success has outlasted the golfer once tipped as the most successful athlete of all time. Take a look:

Are you or anyone you know looking to fundraise for tennis? We have helped a lot of players of all levels raise a great deal of money in the past. We would love to do the same for you.

If you have any further questions please don’t hesitate to get in touch via info@pledgesports.org. Alternatively, go to pledgesports.org and hit “Create A Campaign” to start raising money today!