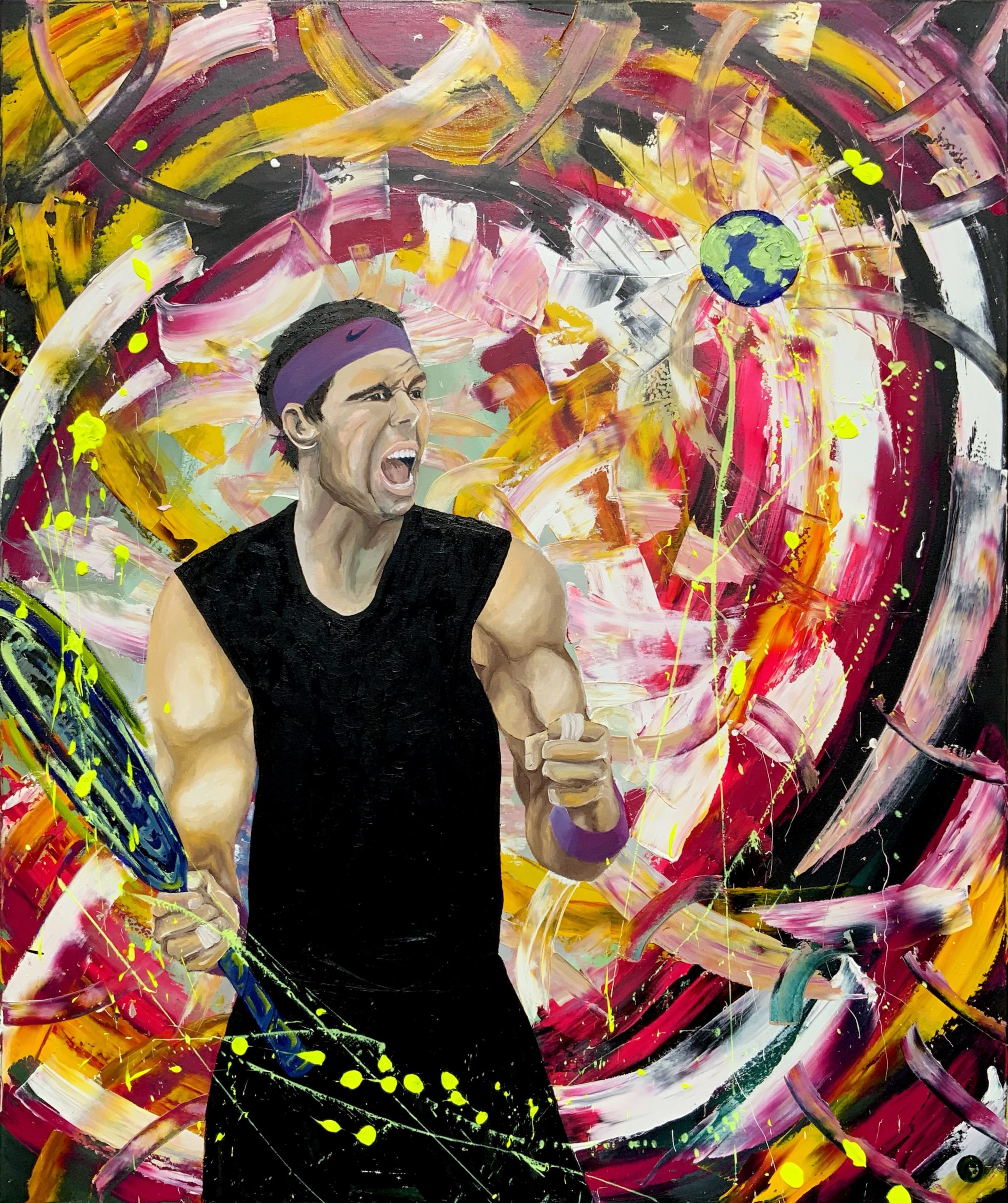 When there’s so little between so much of the talent on this list, getting it 100% right is not easy, but we’ve done our best here counting Grand Slam wins and overall ATP titles in our calculations.

With a new GOAT firmly in place in 2022, here’s a countdown of the 10 best tennis players in the history of the men’s game…

Hailed as the player who changed the way professionals approached their diet, Ivan Lendl had a fruitful decade at the top which saw him collect at least one major per year between 1981 – 1991, winning 8 grand slams in total.

In a period where Jimmy Connors and John McEnroe dominated the men’s game, the Czech native managed to spend a total of 270 weeks as world No. 1 during his career, thus cementing his among the greatest tennis players ever to play the men’s game. 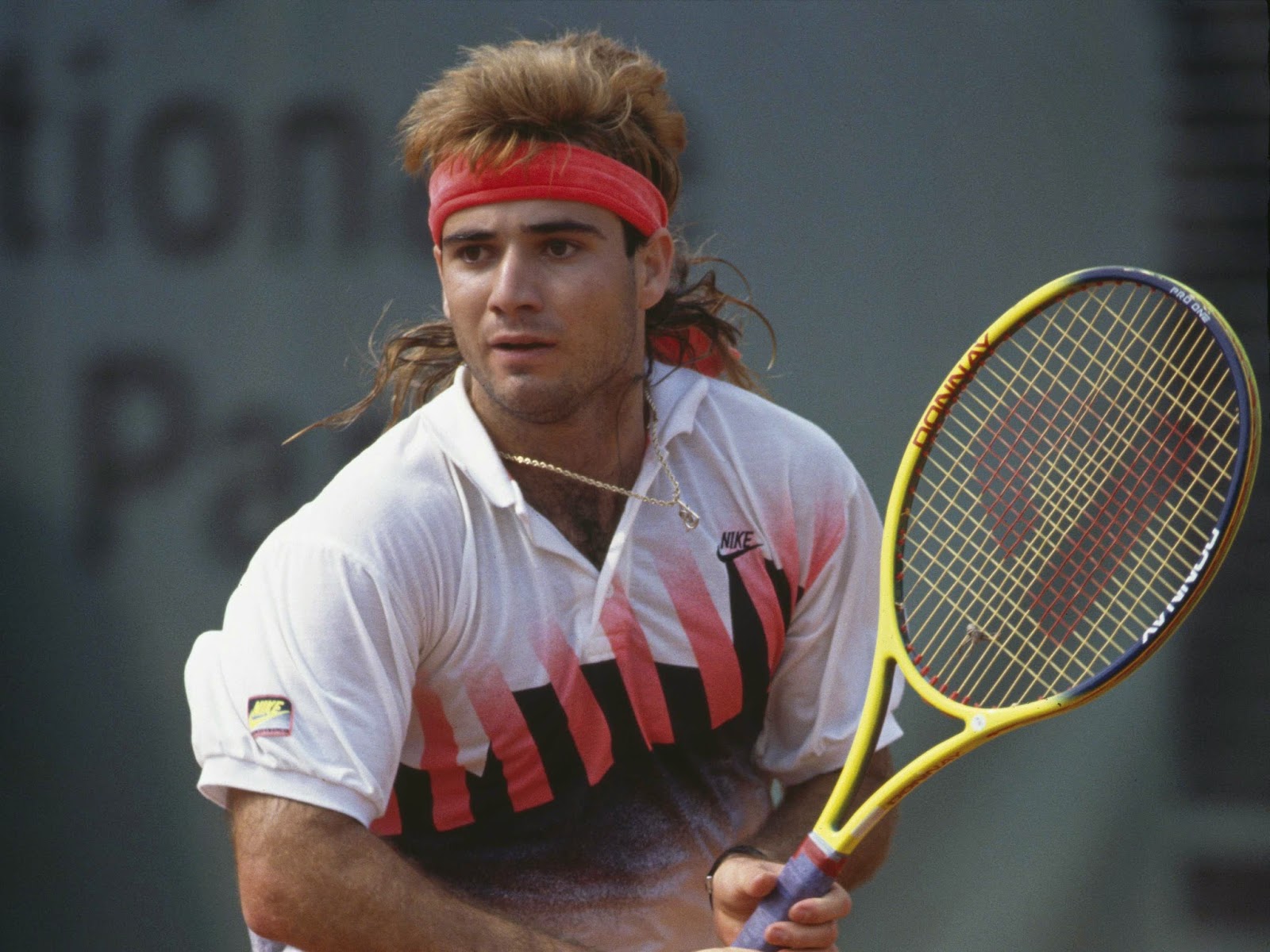 Quite possibly one of the finest strikers of a ball to have ever played the game, greatness was predicted for Agassi long before he entered the professional sphere.

A great competitor, a great mover, and a tremendously smart thinker – Andre Agassi or “The Punishers” as he was known, finished his career on eight grand slam wins, a very rare career grand slam, 8 grand slams and an Olympic Gold in 1996.

Nonetheless, 1974 would also mark the beginning of Connors’ consecutive 160-week reign as the No. 1 men’s player in the world, a record which would not be beaten until three decades later by one Roger Federer. Connors still holds the record for most men’s single titles, however, totalling 109 tournament wins, including 8 grand slams throughout his career. 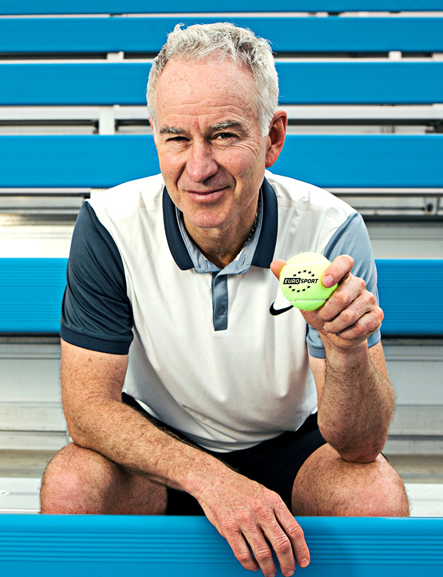 There’s an endless list of adjectives one can use to describe McEnroe – from his talent to his temper, he is without a shadow of a doubt one of the best tennis players in history.

To this day McEnroe holds the record for most men’s singles and doubles titles combined with an incredible 155 (77 singles, 72 doubles).  Mac retired with a healthy  7 Grand Slams.

Borg’s career-defining moment came when John McEnroe passed the Swedish star for the No. 1 ranking by defeating him at the 1981 US Open. Borg made himself the biggest “What if?” in men’s tennis history by skipping the post-match news conference and leaving the stadium without showering, taking a car directly to JFK Airport, and leaving town. He retired for the first time a few months later, with 11 grand slam titles. He was only 26.

He retired for the first time a few months later, with 11 Slam titles. He was only 26, but to this day remains one of the greatest tennis players to grace the men’s game.

Laver straddled the move from the amateur to the Open (or professional) eras of tennis, therefore not only making him one of the greatest tennis players in history but also one of the most important.

Although Laver’s 200 singles titles are the most in tennis history, it was his ability to pull off a second calendar-year sweep of all four Grand Slam tournaments in 1969 – seven years after his first Slam sweep! – that will forever underscore his greatness.  Laver totalled 11 singles grand slams over his career

The 10 most popular Sports 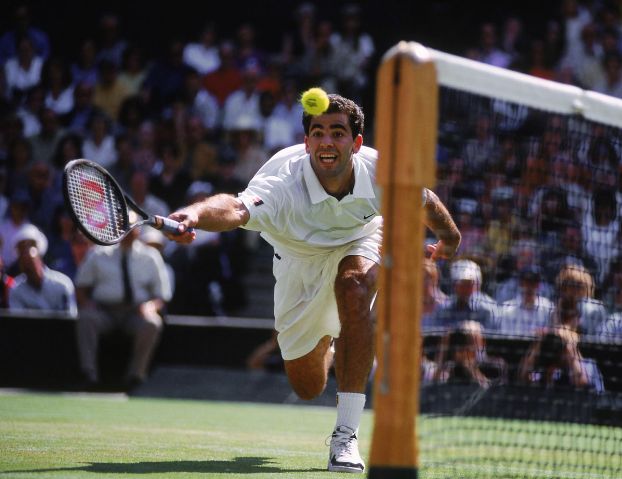 Sampras was never as great from the baseline as Andre Agassi was, but he didn’t need to be. The American’s 14 major titles say it all.

Get $1,000 free bet with the latest BetMGM Sportsbook Promo Code

It doesn’t hurt that Djokovic has a slight advantage in head-to-head matches against both Federer (27-23) and Nadal (30-28), and he certainly made hay while the sun shone in men’s tennis, and the youngest of the big 3 is still going strong with a Wimbledon title in 2019 and Australian Open title in 2020.  In 2021 the Serbian won the Australian, French Open, and Wimbledon titles, bringing his tally to 21 grand slams.

At Wimbledon 2022 Djokovic battled past Kyrgios in the final to secure his seventh Championships title and his 21st major crown.This effectively leaves nothing between the big 3.  However, Djokovic has 86 titles which is less than the other two and of course one less Grand Slam than Nadal.  Should we move Djokovic up to the number 2 spot? 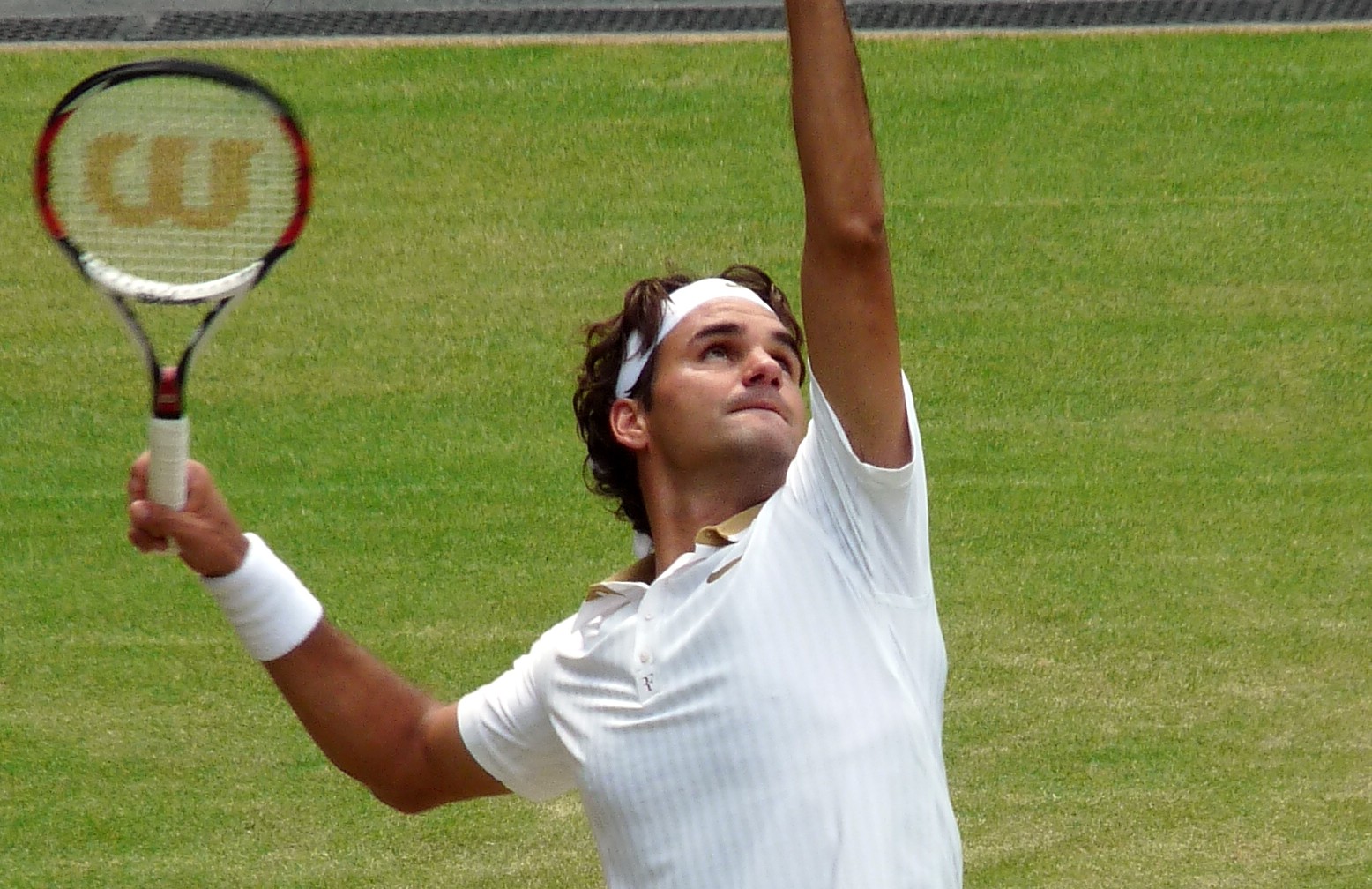 The Swiss star now owns 20 majors after he lifted both the Australian Open and Wimbledon (without dropping a single set) in 2017,  and The Aus Open for the 6th time in 2018. He has also has 103 ATP titles (second only to Jimmy Connors record of 109 titles) and counting, and held the world No. 1 ranking for 310 weeks, another record for the Open era.  Arguable nobody throughout the history of tennis has had more impact on the game than Roger Federer.

At 40 years old, coming back from injury and very little court time, Federer made the 2021 French Open 4th round and lost in Wimbledon quarterfinals before falling to injury again.

And finally, at the ripe age of 41, Federer sadly announced his retirement in September. 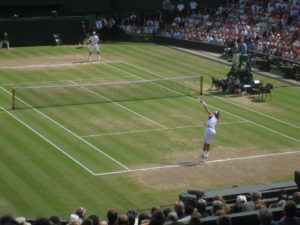 There’s a new GOAT in town and his name is Rafael Nadal!  While Federer made history by becoming the first man ever to win 20 Grand Slam titles, Nadal did one better.  At the Australian Open final on the 30th January 2022, over 5 sets – 5 hours and 24 minutes, Nadal beat Medvedev to become the greatest of all time with an unbelievable 21 Grand Slam singles titles.

King of the clay, with 13 French Open titles under his belt, and twenty one grand slam titles in total, means the race between the big three is now hotter than ever.

With a 23-16 career advantage (mostly on clay) over rival Roger Federer, the fiery Spaniard has been a force to be reckoned with since the mid-noughties.

Nadal is renowned among tennis fans for his relentless work ethic and unparalleled mental strength, both of which were on full display when he overcame Federer in the final of Wimbledon in 2008. A five-set thriller spread over 4 hours and 48 minutes would ultimately see Nadal reign supreme in one of the greatest games ever witnessed.  They were to repeat this epic duel at the 2019 Wimbledon semi-finals with Federer winning.

Nadal lost to Djokovic in the 2021 French open final, but Nadal beat him at the 2022 French Open quarter final, leaving their head to head at Nadal 29 /Djokovic 30.  Then King Rafa went on to beat Casper Rudd in three and win the French Open for a 14th time and accumulating 22 grand slams.

GOAT debate over, Rafa is the chosen one.

King Rafa currently has 90 ATP titles but there’s one more last record we have to mention – For the last 17 years Nadal has remained in the top 10!

With Federer out for most of this year, the real battle will be between Djokovic and Nadal.  The 2023 Australian Open is the next grand slam up for grabs and both players are committed unless injury rules one of them out.  The current head to head between these two is Djokovic 30 / Nadal 29.

Let’s see if more history and record books can be rewritten by the big 3 at the US Open. 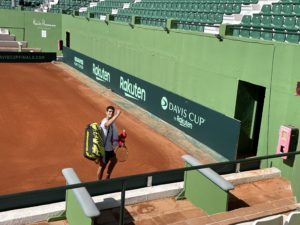 Carlos Alcaraz training at the Puento Ramano in March 2022

Given that no player outside of the big three has won more than 3 grand slams in the last 22 years, it’s going to be very hard to find a new entry here.  Out of the current top players (outside of the big three), Daniil Medvedev, Alexander Zverev, and Stefanos Tsitsipas are the highest-ranked but as they are struggling to get on the majors score board,we can see any of these being future greats.

However, there is one player in the top 20 who is starting to shine through.  The whole tennis world took note when 18 year old Spaniard Carlos Alcaraz beat then world number three, Tsitsipas at the 2021 US Open and since then he has beaten all the top 10 players in the world.  He went one better in September winning the US Open, his first grand slam and is now the top ranked ATP player.

Alcaraz has what it takes for tennis greatness.  Our prediction is that he will win his first grand slam in the next year and will be world number 1 before he is 20.  Stay tuned and watch this space.

Casper Ruud and Jannik Sinner are close behind Alcaraz, could the next big 3 be emerging?  Let’s watch and see.