PledgeSports have the pleasure of working with some phenomenal athletes and teams. Each month we choose one of them as the PledgeSports “Sports Crowdfunding Campaign of the month”. 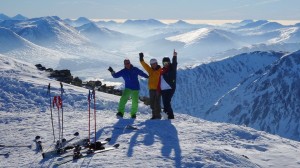 This month’s winner is Glencoe Mountain Resort in the Scottish Highlands. The team at Glencoe have launched a crowdfunding campaign that could be a “game-changer” for skiing in Scotland, and indeed tourism in Glencoe, guaranteeing snow on one of the country’s most iconic mountain ranges and providing a huge boost to the local economy.

Last winter was the worst on record for snow in Glencoe, Scotland’s oldest commercial ski area, with just over 4,000 skiers, compared to the usual 30,000. Slopes at Glencoe Mountain Resort were only able to open for 32 days of the season, and conditions were poor with much of the ground a mixture of sparse snow and mud.

The team want to bring in a new snowmaking machine that will allow them to patch up ski and sledge runs on the mountain. They say the move will benefit the entire community, which is highly dependent on visitors.

It would mean the slopes at Glencoe could be open for a full five-month season, from the start of December to the end of April. 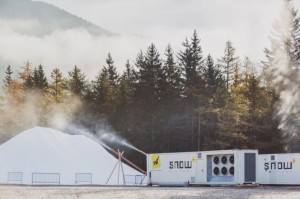 The resort have joined forces with PledgeSports to raise some of the £460,000 needed to buy and install the device, which can create 100 cubic metres of snow per day. Unlike conventional snow cannons, which require cold, calm weather, the TechnoAlpin Snowfactory can operate in mild, wet and windy conditions at temperatures as high as 25°C.

The Snowfactory would be the first in Scotland, but the units have already proved effective on slopes in Eastern Europe, New Zealand and Australia. As well as winter sports, it would allow special snowy events to be offered at other times of the year.

Andy Meldrum, owner and managing director of Glencoe Mountain, says the new Snowfactory could be switched on in early November to build massive piles of snow ahead of an official opening day for the slopes on 1 December. 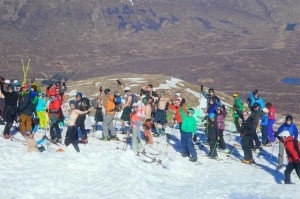 The freshly made snow could then be pushed out onto the resort’s new Coire Poolach ski run and sledging area and used to patch bare areas whenever necessary. The artificially produced snow would also function as a cold base layer that would help stop any naturally occurring snowfall from melting.

“A Snowfactory at Glencoe really could be a game-changer for Scottish skiing,” he said.

“People book their holidays to the Alps months in advance, but here we rely on opportunistic skiers.

“A poor season can kill off fragile local businesses and harm the community but this technology could give visitors the confidence to plan a trip here.

“Being able to provide opening and closing dates and have guaranteed snow for the whole season would allow us to better support our local schools, clubs and athletes and provide a massively improved experience for customers from further afield.

“It will also have an incredibly positive effect within the local economy, helping local businesses during the typically tough winter trading period.”

Snow sports are worth around £30 million a year to the Scottish economy, though this varies depending on climatic conditions. Tourism leaders have commended the Snowfactory plan.

“It is an excellent example of the resilience, determination and innovation of Scotland’s tourism industry,” according to Malcolm Roughead, VisitScotland chief executive.

“As a business greatly reliant on the weather, Glencoe Mountain resort has shown real creativity in considering ways they can continue to attract local residents and snowsport enthusiasts to the area, regardless of the temperature.

“Winter sports are an important part of the Scottish economy, generating millions of pounds every year and supporting hundreds of local jobs.

“I wish the team at Glencoe Mountain resort the best of luck with their campaign and hope to see more visitors on Scotland’s stunning slopes in the near future.”

Glencoe Mountain operates seven lifts and 19 runs on the Meall A’Bhuiridh massif. Originally known as the White Corries, the construction of an overhead ski lift in 1956 saw it became the first commercial Scottish ski area.