Kevin Lee And The UFC 216 Weigh In

Now, boxing as a sport is actually based on the weight of the boxers. That is why the weigh-ins are very important, and that is why the sports is categorized into the lightweight, welterweight and heavyweight. 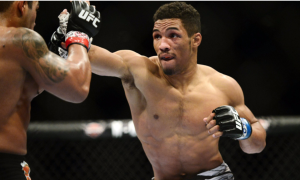 Now we will all recall that in March this year, the man named Tony Ferguson was on the lips of many boxing lovers. Everybody was talking about his interim UFC lightweight title tilt against Khabib Nurmagomedov. He entertained the fans at the UFC 209 open workouts that took place in the T-Mobile Arena. However, due to issues about Nurmagomedov health, caused by a drastic weight cut, he had to opt out just on the day of the weigh-ins.

However, the next phase is here and Fergusson is pitched against a different opponent, in the person of Kevin Lee. Now, one thing to note here is that Kevin Lee has never had issues with his weight before. But this period is a different kettle of fish, as he faced the battle to hit the required weight before the weigh-ins and therefore needed to cut down on some weight.

The story that made the news however is the statement that he came with, which suggested that he was not worried about it.  He posited that he felt good, but that he was working on the right cut, which he needs to achieve before the weigh-ins. he went further to say that he was just ’74 after doing a little cut. For him, nothing has changed and nothing will change, as he has had to cut from much higher weight before.

The explanation is that he needed to cut at least 19 pounds if he was to make the 155-pound championship mark and have his name on the MMA betting odds.

In his statement, he mocked Nurmagomedov who got into trouble trying to cut some weight last term. He posited that he has huge muscles, and because of this, cutting the water components will be easier for him. He said it will be a smooth process. However, when he said he is not going to be a bitch about it, everybody knew he was referring to the Russian.  He went ahead to reveal that he had tiramisu the night before, and that though it will be very painful , especially at the tail end of it, he will face it like a man. This is more important to him because money is involved.

On the effects that the cut will have on him during the fight, he assured the fight fans that they do not have anything to worry about. But should this assurance be taken to heart and should we expect him to give a good fight after the cut? We can get answers to this from MMA betting tips online.

So, the weigh in has come and gone, and the reality on ground is that Kevin Lee achieved the needed result, but not without some scare, as he got this on the second test.  When he tried the first time in the UFC 216 weigh-ins at The Mirage in Las Vegas, the weight came out at 156 pounds. However, he had to leave and work on himself, only to come back after an hour to weigh 154.5. This simply saved him a lot of troubles as his interim lightweight titlefight with Fergusson was confirmed.