Are the Golden State Warriors Surprise Contenders This Year?

Well, there is still a long way to go. But, there is definitely excitement among the fans. Let’s take a closer look at the Golden State Warriors and how they are shaping up so far. 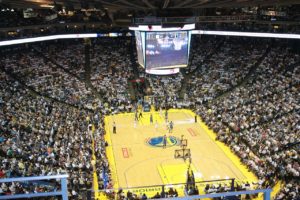 A Perfect Start to the Season

In the preseason, the Golden State Warriors were undefeated. They made their intentions known and it was clear that the team were working well together. Fans are hopeful they can see more winning than they have done over the last two seasons. In fact, the Golden State Warriors have the best record in the NBA so far and the team is sitting proudly at the top of the Western Conference. With 20 wins and only four losses, the team has a huge opportunity to have a successful season. But, do they have what it takes?

If you are someone that likes to gamble, you are going to be watching the Golden State Warriors very closely. You could win a lot of money betting on them to win games, as well as what players will perform well. No doubt that if you do enjoy NBA betting, you will be putting money on this team winning the championship.

There is no doubt that there is a lot of noise coming from the stadium and from fans around the world. They are excited and with players like Steph Curry, it is easy to see why. They have enjoyed some great basketball so far and are eager to see more. But, there is always the danger of this success and noise going to the heads of the players. Yet, Curry has been the first player to say that while it is nice to hear people talk highly of them, it must not change their thoughts about themselves. In particular, he is downplaying this hype but knows how good a start to the season can change things.

When you have a good start to the season, this can mean you have a good foundation for winning the championship. But, it is also important to remember that there are still plenty of games left to play. You might not be able to win a championship by December, but you can make sure that you put yourself in the best place to do this later on.

This is not to take away the success of the Golden State Warriors. With only four losses so far, they are collecting as many points as possible. You cannot say for sure whether they will win the Western Conference but you know they are going to be up there contending. Their convincing wins over the Los Angeles Lakers and the Hawks have impressed many. These are teams that were tipped to be championship contenders before the season started.

The latest defeat to the San Antonio Spurs was a disappointment for fans. It demonstrates just how quickly things can turn around in the Western Conference. But, the Golden State Warriors have bounced back and beat the Orlando Magic, which is exactly how you want to respond. With 20 wins from 24 games, other teams are going to be apprehensive to play you and it is going to be an exciting season in the NBA.