The Misunderstood Effects of Team Chants on Athletes 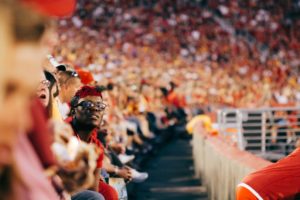 For as long as sports existed, there was a crowd to chant and support the athletes. We can even assume that the gladiators of Ancient Rome had people cheering or jeering them through their deathly trials. However, a question remains: does it really affect the athletes’ performances? If you think this can influence an athlete, maybe you should cheer for your favourite player next time you choose to bet with ThePuntersPage.

Research by Elon University’s L. Kimberly Epting has shown an evident influence of the crowd on the athletes’ psyche, and this goes hand-in-hand with several factors, like if the team plays at home. This study, published in the North American Journal of Psychology, also determined that the influence of cheers and jeers varied depending on the sport.

As Aristotle pointed out, “Man is by nature a social animal”, and when a crowd wants to unite, their voices come together as a bonding mechanism. Several group studies proved that when confronted with a group of people, humans naturally want to fit in and try to conform to the social habits of the group. For these reasons chanting the exact words as the crowd can be considered a form of cultural bonding, this is how we unite, and the athletes on the field can feel this energy. You can learn more about the science behind crowds chanting with this neat BBC video.

The study led by Epting showed that the crowd had various effects depending on whether it stayed silent, jeered or cheered, but also that the effect was different based on the athlete’s skills. Quoting the 1982 study from Michaels, Blommel, Brocato, Linkous and Rowe, Epting shows that the performance of pool players improved when there was a small group of eight spectators, but that mediocre players were affected negatively by the presence of the audience.

However, several studies quoted by Epting offered different results depending on what was observed. In some cases, it was concluded that the crowd didn’t affect the team’s behaviour, while in other cases, it was noted that the crowd jeering caused the team to commit more infractions. Despite contradictory results over the years, sports fans and athletes still humbly believe in enhancing the effect of the home crowd.

The basketball players weren’t affected by any condition during their free throws. Surprisingly, golfers performed better when the audience was silent, and the performances decreased when the crowd was either cheering or jeering. Pitchers threw significantly fewer strikes when the crowd was unsupportive or silent.

Are Crowd Chants Really About the Impact on Athletes?

The many studies conducted over the years showed very different outcomes depending on sports, players’ skills or whether the match was at home or if the team was visiting. So at this point, there’s no definitive conclusion on the impact of chants on sports performances. Yet, a big part of the effect produced appears to come from the belief rather than a substantial influence.

Given the facts, we can conclude that the primary effect of chanting during an event is social bonding because it’s not only used in sports. As the BBC video demonstrates, chanting has more impact on the crowd itself than on the people it’s directed at, as it’s still used to coordinate troops on the battlefield.