Thanks for taking time out to view my campaign.

My name is Brendan Boyce and I’m from Donegal in Ireland. I started out in sport at a very young age and as a kid watching the Olympics in Barcelona I knew that that was what I wanted to do. To achieve success for my country in the greatest sporting arena.

I was immersed in athletics since I was a toddler. I was the youngest of seven children and was always brought to events and just loved to run. I won my first national medal in the 60m sprint at the age of 7. Growing up as the youngest made me a scrapper and I always fought hard for everything, I always aimed to beat my siblings at whatever sport it was. Over the years I’ve won national medals in cross country, walks, volleyball and table tennis. I even played football, gaelic and basketball at a local level. However, it was racewalking that provided me with the outlet I needed. It has brought me to the highest standards of competition.

I was self coached for most of my racewalking days until I moved to Coventry in 2007 at the age of 20. There I was able to find a coach and athletes to train with. One training partner was at a qualifying standard for the 2008 Olympics and once I started, I was learning on a daily basis what it took to train at that level. I knew that I just needed to focus and train hard for 5 years and I could be there in London in 2012. The  rigid training regime and my dedication paid off. I made it to London and produced the best race of my life, finishing 29th with a new Personal Best. It was what I had always wanted as a kid, to wear the green vest on the Olympic stage. It made it all the better to have it close enough to home that my family (my biggest supporters), friends and thousands of sports mad Irish fans could support me.

Now I have a new focus for my sport, the next step is to bring home some silverware for my country and to show that Ireland is and should be up there on the podium. I moved to Cork to train with now world champion Robert Heffernan. He has shown me the path to take but to win at a global level I need the support of a professional team around me – which is a huge financial challenge. The path to success is laid out in front of me, I want to be the one to inspire others the way I was inspired as a kid, but more importantly I want to lay down that path in front of them as well.

Thank you for supporting 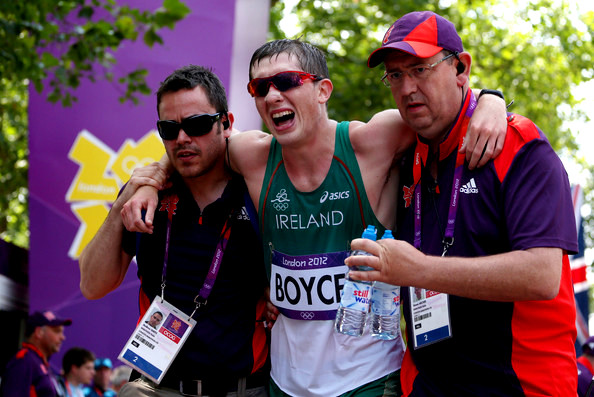 15th in my first senior global championships in 20km event

63rd on my World cup debut in Saransk in 20km event

My first championships race over 50km and finished 28th with a PB.

25th in the 50km event at my first world championships with a PB performance.

77th in the 20km event that the world cup in Taicang, China

Listed as a supporter on my page and shout out on twitter.
10 taken.

Access to my online training schedule. Plus all of the above
5 taken.

Signed London 2012 Olympic memorabilia. Plus all of the above.
2 out of 15 taken.

€500 Personal one to one coaching session

Personal one to one coaching session with individual or club of up to 15 people. Plus all of the above.
0 taken.

Give a talk at your corporate event and have your logo on my social media pages. Plus all of the above
0 taken.

One thought on “Path to Success”