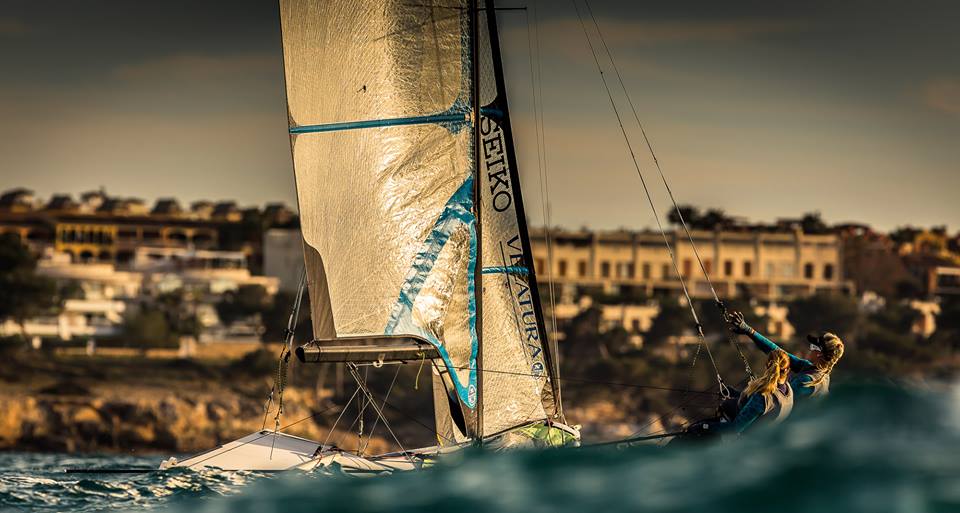 We are Andrea Brewster and Saskia Tidey, full time sailors campaigning to represent Ireland and achieve our Olympic ambition of winning a medal in the 49erFX class at the Olympic Games in Rio 2016.

We are members of the Irish Sailing Association (ISA) Olympic Development Squad and are recognised as Ireland’s most promising 49erFX pairing for Olympic qualification.

Our boat, the 49erFX is fast and very challenging to handle. 49erFX sailors need to be athletic, strong, agile and have extremely good balance. A typical weeks training would consist of 20+hrs on the water and 10+hrs of aerobic and strength and conditioning training. This is a full time job, where we are not only at battle with the opposition but with the elements

As the helm, Andrea steers the boat and does the majority of the race tactics, making decisions in high pressure and rapidly changing situations. Saskia’s role as crew is to keep the boat sailing as fast as possible at all times by controlling the trim of the sails and the balance of the boat. Both jobs are equally demanding both physically and mentally. Our partnership began in August 2013 and at our first event the 2013 49erFX World championships, we had a number of top 5 race finishes, one of them being a convincing win.

Our team Facebook page is called Brewster/Tidey IRL 49erFX Sailing. We post daily updates about our campaign and have over 1,435 subscribers and reach over 20,000 page interactions a week. We have made a serious commitment to raise the profile of sailing and the involvement of women in sport. Through social media we hope by sharing our Olympic experience we will encourage others, especially women to pursue a level of sport where they can get as much enjoyment as we do with sailing.

To date our campaign has been largely self funded by our families. Some of our biggest expenses include : – Funding a full time coaching programme – Training and event logistics. Sailing events take us world wide with our equipment. – Replenishing equipment. New and good equipment it essential to be able to compete on a level with the other nations. We are asking for financial support through Pledge Sports to help us pursue and afford our goal of representing Ireland at the 2016 Olympic Games. We are looking to raise enough funding to purchase new equipment for our Olympic qualification event and raise funds towards our coaching expenses for the World Championships this September.

We want to try raise €12,500, this won t nearly cover our costs but it will make a massive difference!  Every little helps to give us the best possible chance to succeed. With out financial assistance the quality of our sailing campaign will slowly deteriorate. By contributing you will be part of our support team in our ‘ Race to Rio’. We are looking forward to sharing our campaigning experiences with you.

Yours in Sailing, AB & Sas

Be listed as a supporter on our campaign page.
1 taken.

Thank you on our Blog at the end of our PledgeSports campaign + photograph + Twitter shout out + handmade racing rope keychain.
4 taken.

Be listed on Team Brewster/Tidey's Blog for 12 months as a patron to our campaign + Level 3 rewards.
0 out of 10 taken.

€1000 Brand recognition on our boat

Brand recognition on our boat, social media sites & team uniform + bronze sponsorship benefits + Corporate day - Meet and greet with Team Brewster/Tidey in our home sailing club The Royal Irish Yacht Club. (Date will be subject to our training/racing schedule). Contact Richard@pledgesports.org to tailor something suitable for your company.
0 out of 1 taken.
Support Choose your own payment