10 Niche Sports You Know Nothing About 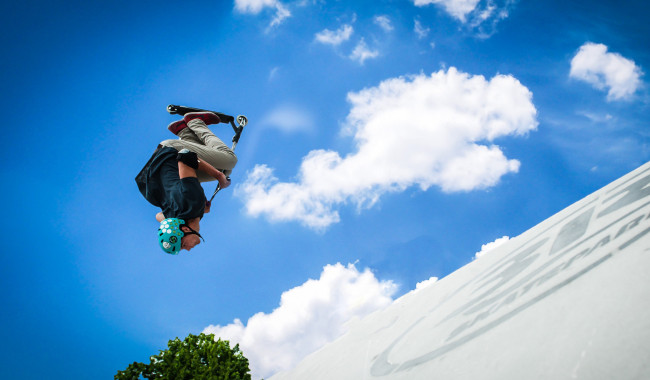 WE pride ourselves on knowing everything there is to know about sports and its industries, but every now and again we get thrown a Korfball.

Don’t know what that is? Neither did we, and there’s plenty of other popular niche sports out there that our crowdfunding campaigns have taught us about too. Here is the top ten international niche sports we reckon you know nothing about.

Better known – and summed up – as Underwater Hockey, Octopush began in England in 1954 as a way of keeping a sub-aqua club occupied during the winter. It’s a team sport played in a pool with the aim of getting a hockey puck into an opponent’s goal using a tiny hockey stick called a pusher. It’s a six-on-six game requiring the unique skill of holding your breath to score. No wonder there’s so many substitutions.

This niche sport’s name conjures up images of an agricultural past-time, carried out on lazy summer afternoons. In reality, no fences or fencing are involved. It’s actually sword-fighting and the term’ fencing’ derives from the Middle English shortening of ‘defence’ to ‘fence’. Opponents, clad in protect clothing and masks, fight for points, gaining such things by making correct contacts with their rivals bodies. Sensors in the clothing and masks pick up these hits, made by long, metal, pointy weapons – foils, epees and sabres.

Enjoying this? Head over to our award-winning blog for lots more great content!

Apparently you can play this with a human and not just your dog. When you play it with humans it becomes Ultimate Frisbee and looks a bit like rugby or American football; teams of seven pass the frisbee up a 120-yard field aiming to get it into their rival’s end zone to score a point. A unique feature is the lack of referee in all but the most elite games, relying on players to call their own fouls. The sport’s leaders say it’s to keep sportmanship and the “spirit of the game” alive. Take a look for yourself at Frisbee Highlights.

You Googled at the top of the program and I know what you’re saying, ‘how is that different to netball or basketball’? Well, the courts are bigger and the nets are higher, and they aren’t nets – just rings with no backboard. The rings are well inside the back line, allowing shooting from any angle, and the courts are halved not cut in three. It adopts the no-moving-with-the-ball and stay-in-your-section policies from netball and player roles are simplified into just attacker or defender. Also, there’s a mixed-gender option; now you’re interested!

Not rally, not track – a bit of both. It’s the car version of the popular motorbike sport motocross and cycling’s cyclocross. It sees cars race on a track with off-road sections, including ramps. It’s a fast-paced niche sport often ending with a driver doing a fancy donut.

Think upside down dancing, mixed with gymnastics. Around since 1891, it has been called water ballet and requires competitors to perform team, duet or solo acrobatic aqua-dance routines to music, in sparkly costumes. As in gymnastic floor routines, points are scored based equally on technical merit and artistic impression with many moves named after birds and nautical things – like flamingo, crane, and sailboat. Check outAquabatix, they’re rather good.

This niche  sport is Scotland’s version of Ireland’s hurling, with a lot more play carried out on the floor rather than over-head, and with a longer stick, called a caman, resembling a hockey stick. The caman can play the ball on both sides, like a hurl in hurling, and is made out of wood still too, unlike in hockey which has gone all modern with its carbon and fiberglass. Unlike in hurling, players cannot catch the ball and teams are smaller – 12 vs 15 – and matches are longer – 90mins vs 70mins. It’s actually mainly confined to Scotland these days, so maybe support our Scottish Touch Rugby project instead.

We’ve got two dragster projects running right now. One of them for a celebrity machine called Dorris Dormouse and the other is three under 12s racing mini dragster bikes and cars for The Fire Fighters Charity – both WELL worth checking out. Drag racing is an explosive niche sport; two vehicles race over up to a quarter of a mile  using alcohol or nitromethane as fuel. Sometimes they do fancy stuff, fire burnouts.

This came across our desk just the other week when Scoot GB needed money to buy a new van.  It’s a freestyle sport using a little kick scooter, the ones you see kids or over-grown kids kick-rolling to school on. Tricks are performed using ramps and other props in the a BMX- or skateboarding-esque way. Epic stuff!

We have helped raise in excess of £10,000 for Britain’s judo players as they try to fund the niche sport’s lengthy and costly Rio 2016 Olympic qualification period. Commonwealth Games medalist Tom Reed, British National Champion Gary Hall, their training partner Adam Hall, and most recently fellow Bath-based player Gregg Varey have all used PledgeSports because funding is so limited for this martial art.

Originating in Japan, the aim is to take your opponent to the ground, or immobolise them, or force submission with a move like a choke. It is scored on a sliding scale from the Ippon, a winning move where an opponent is thrown on to their back with impetus and control. All other scoring moves have to be carried out more than once to add up to an Ippon and victory.

Do you play one of these sports or know anyone that does and needs help with funding? Get in touch via info@pledgesports.org and we will be happy to help.

One thought on “10 Niche Sports You Know Nothing About”