Olympic Charter Rule 40 Explained – What It Means For Sponsors & Athletes

FOR Rio 2016 the International Olympic Council has relaxed the Olympic Charter Rule 40, creating more flexibility for sports sponsors and athletes alike. Here we explain the IOC’s Rule 40 and what it means to athlete’s sponsorship deals for Rio 2016.

The controversial Rule 40 is written into the Olympic Charter to protect the rights of official Olympic sponsors. For the investment they put into the Games, these brands are allowed to use trademarked Olympic terms, phrases, and images in their campaigns.

Under Rule 40, before and during the Olympics, no other brands are permitted to use words like ‘Olympic’, ‘Gold’, or ‘Games’, nor are they permitted to publicly associate themselves with Olympic athletes, including wishing them luck on social media and even retweeting Olympic-related tweets about them.

And vice versa, during the blackout period of July 26 to the end of the Rio 2016 Games, athletes cannot credit or mention their sponsors if they are not official Olympic brands.

‘Except as permitted by the IOC Executive Board, no competitor, team official or other team personnel who participates in the Olympic Games may allow his person, name, picture or sports performances to be used for advertising purposes during the Olympic Games,’ reads the rule.

At the London 2012 Olympics, athletes protested against Rule 40, launching #WeDemandChange on social media and branding it ridiculous that they should have to break ties with their long-term sponsors during such a key time – a moment these brands helped create through sports sponsorship.

The IOC listened and let out a bit of rein. They will again relax their Rule 40 policy for Rio 2016, allowing some advertising during the blackout period.

Though the IOC’s new stance on Rule 40 does relax the original non-Olympic brand partner advertising blackout before and during the Olympics, all Rule 40 policies must still ban Olympic-themed adverts.

This means that no athletes, team officials or other team personnel can be involved in any non-Olympic sponsor’s advertising – from a video, to a poster, to a tweet, to a retweet – that involves any of the following words and phrases, depending upon context:

Nor can they use these:

However, brands can still congratulate and celebrate with their athletes by getting cryptic like @Juliano4130…

#rule40 is even better than playing the game of taboo: congrats to our champ for that ribbon with a piece of metal she got in South America

What’s not banned under Rule 40 for Rio?

Relaxing Rule 4o means that now athletes can appear in advertising campaigns for long-term sponsors during Rio 2016, subject to special dispensation granted by their National Olympic Committee and approved by the IOC.

Team GB published their guidelines on Rule 40 restrictions in December last year, explaining exactly what is and isn’t allowed with useful pictograms.

It explains that there are two ways for British athletes to get advertising approved, Deemed Consent or a Rule 40 Waiver.

In addition, any advertising campaigns seeking approval via deemed consent will need to have been running continuously since or before 27 March 2016.

Check out Team GB’s guidelines to Rule 40 for its sponsors and athletes by clicking here. It’s an excellent Rule 40 explainer.

Despite the relaxation of the Rule 40 policy, many athletes and their sponsors are still against the level of restriction that remains in place. From July 26 until August 24 athletes cannot even publicly thank their sponsors for their support, and sponsors cannot even retweet the news of their athletes Olympic success (see in-depth dos and don’ts in the Team GB document).

To mark the start of the blackout, many athletes and brands took to Twitter to take the last opportunity to thank their personal sponsors and athletes. 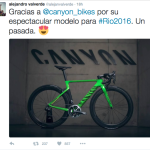 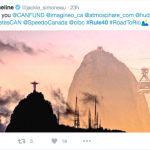 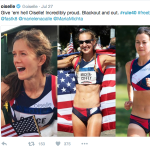 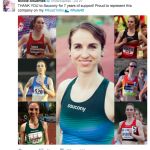 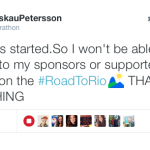 A website called Rule40.com  has been set up in the US to lead the movement against the rule it explains ‘prohibits athletes from marketing themselves during the most high-profile two weeks of their career – the Olympics. Meanwhile official sponsors and the IOC profit.’

It calls for a complete eradication of Rule 40 and offers ‘Rule 40-safe’ downloads for brands to use to support the Olympic athletes they sponsor.