This woman changed her life around by getting active

After heavy smoking from her teens to her 40’s, Trish Train turned her life around for the better and set herself on a healthy new path by starting to run. We hope that Trish’s story will inspire many other women out there to change their lives and get active and healthy.

Fast-forward to today and the 50 year-old Isle Of Wight native has been selected to represent her country at the 2017 Gotland Games.

We caught up with Trish to learn more about her life’s remarkable turnaround and how her life has changed since she started running just 4-and-a-half years ago. 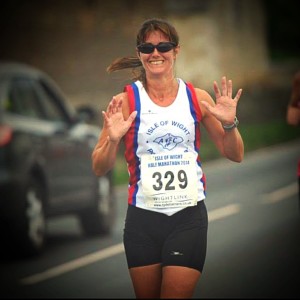 The combination of a difficult childhood and suffering from food issues tipped a young Trish Train’s world upside down. How she felt would lay the groundwork for decades of unhealthy living.

“When I was Primary School age, I was a good sprinter but the combination of living a few doors from a sweet and chip shop and a not particularly happy childhood resulted in me becoming a rather overweight child. In my teens and early 20’s I had food/weight issues which I resolved, stupidly, by starting to smoke.

“What started as an occasional habit soon escalated to be out of control. In the end I was smoking pretty much every opportunity I could, probably 35-40 a day,” said Trish.

Any pressure that Trish felt from her earlier eating disorders was exaggerated by the birth of her son. A single mother, Trish has worked tirelessly to raise her son and make him into the young man he is today.

“It was worse when my son was born. He is on the Autistic Spectrum and has ADHD so he was a difficult child, that I have brought up on my own since he was 3 years-old. He is 18 now and has matured, with a lot of hard work, into a lovely young man. 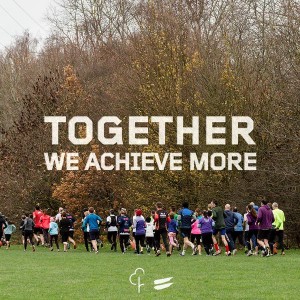 “He occasionally parkruns but his main interest is karate, he is one grade away from a black belt. I have always encouraged him to try new hobbies but I don’t think he will ever be passionate about running!” said Trish.

So, where did Trish’s inspiration to be healthier come from? It’s not often the a person’s lifestyle goes through such an emphatic turnaround. What was the turning point in her incredible story?

“When I was in my early forties I had repeated bouts of bronchitis and remember an occasion I woke to a noise that I thought was a phone ringing but was in fact my chest rattling! I decided I must quit smoking or I would be lucky to reach 50. After a few failed attempts I quit for good in 2010, with the help of a local clinic.

“My carbon monoxide reading had been 46 (a heavy smoker is typically between 15-20), so I was genuinely frightened for my future health. I joined a local gym to avoid weight gain and be more healthy. Two or three years later I started to run,” recalls Trish.

Every athlete at some point or another suffers from injury. title did Trish know that her worst injury to date wouldn’t come from sport itself, but rather, her new job as a post lady for Royal Mail!

“I changed jobs primarily because I needed something with more hours/pay for when my son left education and the postal job came along. I did think it would either help or ruin my running, it is very physical. A few weeks after starting there I fell and subsequently fractured my ankle, chipping a piece off my tibia. This is probably my worst injury,” said Trish.

Rise To The Top

Besides her unfortunate injury, Trish’s job has boosted her fitness even more. Since starting with Royal Mail in 2015, Trish has gone from strength to strength, running better times across all distances from 5km to half-marathon. 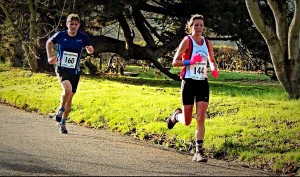 Under the watchful eye of coach Geoff Watkin, Trish has won the Brading 10k, placed 1st in her extremely competitive age catagory at the 2016 Hampshire Road Race League, and is ranked 32nd/15600 in the U.K. in the V50 category.

In addition she got the news in December that she had run a qualifying time for the Island Games in the Gosport Half Marathon and that she was being offered a place on the Isle of Wight team.

A Moment To Reflect

The past 4-and-a-half years have been a whirlwind for Trish. As she reflects on her unbelievable achievements and progress, what advice would she offer to herself 10 years ago?

“I would tell Trish 10 years ago to never set your boundaries too low, you never know what you can achieve with some self belief and effort. I would say to try every opportunity in life, I wish I had discovered I had this talent earlier.

“I have never experienced anything on the scale of the Island Games so hope the occasion doesn’t overwhelm me and that I can enjoy it. That said, I will also be aiming for a personal best and if we can rank well in the ladies Half Marathon team, alongside Laura Brackley, that would be fantastic,” said Trish.

Athletes competing at the 2017 Gotland Games are completely self-funded. If you would like to support Trish and continue her incredible story please click here and visit her fundraising page.

Are you or someone you know seeking funding for athletics or the 2017 Gotland Games?