Throughout history there have been many amazing feats of strength, some have been officially recorded while others are the stuff of legend.

One such record is from American Paul Anderson, in 1957 he was entered into the Guinness Book of World Records.  The entry stated, “Greatest Lift.  The greatest weight ever raised by a human being is 6,270 lbs. in a back lift (weight lifted off trestles) Paul Anderson.  The record was ultimately removed from the Guinness Book of World Records due to insufficient witnesses.  But Paul Anderson was a strongman legend and at the time, he was a world and Olympic champion and held records in clean and jerk and squat.

One thing is for sure in the world of powerlifting, records are being broken every year, just this year the squat and deadlift records have been smashed. 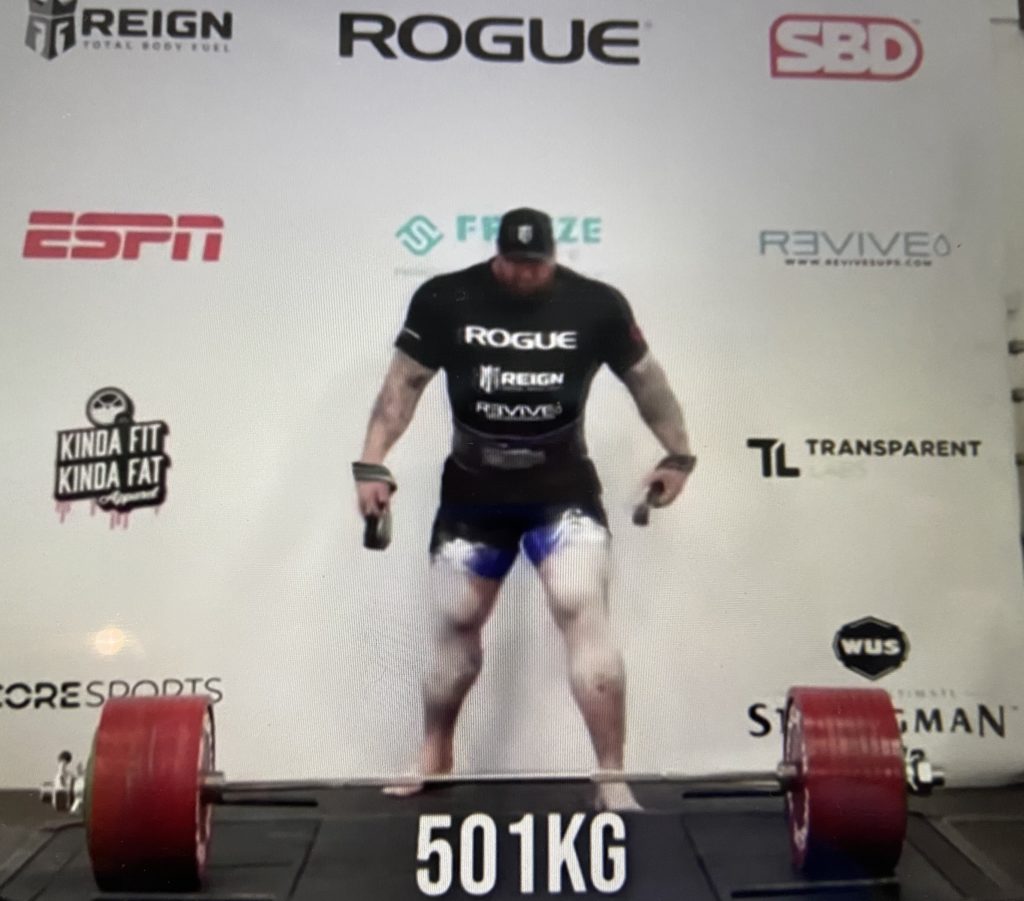 Hafthor Bjornsson about to break the deadlift record in May 2020

In May 2020 Game of Thrones actor and strongman Hafthor Bjornsson set a world deadlifting record by lifting 501kg (1,104lb).  The Icelandic 6ft 9in, 193kg giant lifted the barbell for two seconds, before dropping the weights and setting a new world record.

His record may have been beaten by Hafthor Bjornsson, but Eddie hall was the first human to deadlift half a ton (500kgs).  On 9 July 2016, Staffordshire-born “The Beast” Hall, achieved what no man in the history of the human race has been able to do. Eddie hall lifted over half a ton, (1102 lbs), in a memorable deadlift during the World Deadlift Championship.

The uncontested greatest athletes of all time

He beat another record again in the fall of 2017 where he once again lifted an astonishing weight, 536 kg (1181 lbs) from the ground, this time with the bar slightly higher at 18 inches.

Georgian weightlifter and Olympian Lasha Talakhadze (6’6”, 371 pounds), rewrote the history books at the 2019 IWF Weightlifting World Championships where he earned three gold medals and broke both the snatch world record with a 220kg or 485 pound lift and also broke the clean and jerk record with 264kg or 582 pound lift.

There are 2 records for bench press, one and the true measure is for the raw bench press.  This record is held by American Julius Maddox who broke his own record in March 2020 bench pressing 770 pounds, 349.27 kg

Maddox was the current world record holder for raw bench press, which he first set in August 2019 with a 739.6 pound lift, then bested his own record in November 2019, when he benched 744.1 pounds at the Rob Hall Classic in Austin, Texas.   His aim it to bench 800 pounds

Blaine Sumner is regarded as one of the world’s strongest powerlifters, in March 2020 the American broke his own record by squatting 1,135lbs/515kg

These weightlifting records will continue to be broken and we’re guessing that Eddie Hall will try to regain his deadlift record from Hafthor Bjornsson this year.