3 Major Sporting Events to Look Forward to in 2022 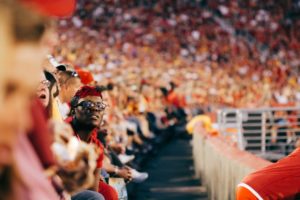 We love sports. We love them so much that 2021 isn’t finished yet and we’re pondering the 2022 landscape. It’s not that 2021 hasn’t been great for drama and excitement, or that there isn’t more to come, yet it’s hard not to gaze into a crystal ball and predict the future.

Even though this year isn’t yet done and dusted, the anticipation regarding a select number of 2022’s events is palpable already. In this post, we will outline what we view as the top three major sporting events for next year.

Does it get much bigger than the World Cup? The viewing figures suggest the answer is no. Billions of people tune in to watch their nation attempt to make it out of the group stages and into the last 16, with even the minnows that have no chance of winning glued to the screen. The 2022 edition in Qatar has extra relevance because it may well be the final tournament for two of the GOATs.

Lionel Messi and Cristiano Ronaldo have taken the sport to a different level since they broke onto the scene over a decade ago. Since then, we’ve watched as they dominated the Ballon d’Or, becoming two of the most decorated players ever. Now in their 30s, it’s feasible they may retire from international football to preserve their domestic form, making the 2022 World Cup a watershed moment.

Technically, the latest version of the NBA season will begin in 2021. However, it ends in 2022. Plus, that’s when the culmination of a gruelling campaign comes to a head in the play-offs. After last season, there are several questions basketball fans want answers to, including whether LeBron James can return to greatness.

NBA news outlets have implied that at 36, James may be too old to compete with the likes of Giannis Antetokounmpo and Nikola Jokic. Of course, it’s too early to write off the Lakers’ Power Forward, especially as last year was by no means a bad one personally. He didn’t receive a vote for the league’s best player, but he did finish the season with stats of 25.0 points, 7.8 assists and 7.7 rebounds after an ankle injury forced him onto the sidelines. Is he washed up? We’ll find out in 2022.

The World Athletics Championships were originally due to be staged in 2021, but they were pushed back to prioritise the Tokyo Olympics. As a result, they will now take place a year later, leaving a lot of questions to be answered. After all, there were a handful of surprising results in Japan that appear to be down to a lack of preparation time.

The 100 metres Final, any athletics championships’ blue ribband event, was a prime example in 2021. Italy’s Lamont Marcell Jacobs raced past the finish line to claim his country’s first-ever 100m gold medal, beating Canada’s Andre de Grasse and the USA’s Fred Kerley in the process. To say the result was out of the blue is an understatement, so all eyes will be on Jacobs to see if he can recreate history in Eugene, Oregon.

These are the events we can’t wait to watch in 2022. Do you agree? Which events, if any, would you swap?