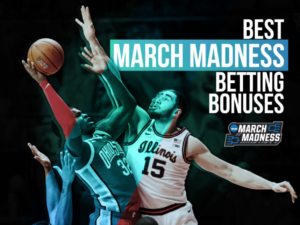 The year 2021 is well and truly over, which means college basketball fans will soon have March Madness knocking on their doors. Selection Sunday isn’t all that far away but, for those looking to catch some value bets, there’s still plenty of time.

The Gonzaga Bulldogs are the current favorites to win the National Championship at 6/1 and will hope to make good on it this time around after going to the finals but falling short last season.

The Baylor Bears, who triumphed at the final hurdle in 2021, are next on the favorites ladder at 10/1 but are joined by the Duke Blue Devils, who have similar odds. The Purdue Boilermakers and Kansas Jayhawks are next at 12/1 and 14/1 respectively, while the Auburn Tigers have also been attached to odds of 14/1, presenting value for most of the March Madness betting sites.

The Zags’ hopes of going the entire season undefeated have been squashed but they remain the favorites for NCAA glory this year and could be proud of what they have achieved over the last two seasons. They will be unfortunate to mount a challenge without Jalen Suggs and Corey Kispert, with the pair moving on to the NBA, but did return Drew Timme and Andrew Nembhard. They also brought in five-star recruit Hunter Sallis, the second such recruit in program history, as well as Chet Holmgren, the No.1 player in last year’s recruiting class.

Timme and Holmgren have formed a solid partnership up front. The former is averaging 18.8 points a game while the latter is putting up 13.6 points per contest. The Bulldogs are the second-ranked team in the nation following losses to the Alabama Crimson Tide and the Blue Devils.

For punters looking for top value, the Boilermakers are offering just that at the aforementioned 12/1. They earned a No.4 seed in the NCAA Tournament last season though they only had freshmen in the squad. They’ve brought a stacked roster back this season, boasting players who now have tournament experience, including some of the best young stars in the country such as Trevion Williams and Jaden Ivey.

Ivey, a projected lottery pick has been leading the team in scoring with 16.7 points per game, as well as 5.0 rebounds, 2.9 assists and 1.2 steals a game.

Purdue has only lost to No.13 Wisconsin, Indiana, and, rather shockingly, to Rutgers this season.

Alabama, another great value pick, boasts one of the most talented guard combos in the nation in Keon Ellis, Jaden Shackleford, and Jahvon Quinerly all playing up top and combining as the Crimson Tide’s top three scorers.

While a big win over Gonzaga shortened the odds, they’re still great bets for value at 28/1, although losses to Davidson, Memphis, Mississippi State, and Missouri have seen them drop from the AP Poll’s Top 25. Onlookers will know a lot more by the time they’re done with fixtures against Baylor and Auburn – they are coming off a victory over LSU, though.

At 20/1, the UCLA Bruins are favorites when it comes to value betting for the tournament. The 13-2 program is ranked No.7 in the country, only losing to Gonzaga and Oregon. They move forward with a mix of experience and raw talent, having gone to the Final Four as an 11 seed last season and getting stopped by Gonzaga.

They appear to be improved this term too, after adding Peyton Watson and Myles Johnson, who have been great for their defense.

The biggest factor, unsurprisingly, has been hotshot future lottery pick Johnny Juzang, who is leading the Bruins in points scored with an average of 18.7 for the season.

Juzang was named the Pac-12 Men’s Basketball Player of the Week for January 24 after posting 25.5 points per game on 58 percent shooting, including 57 percent from distance.

“Well first of all, I’ve had some great opportunities with my teammates finding me,” the guard told reporters this week. “The coaches, just getting things to click. It’s kind of just like, I think, playing with approaches, going into the game just finding presence, really being present in the game. I don’t know. I think getting comfortable, especially after our break.

“I mean it could be a lot of things, but I think the biggest thing has just been my teammates have been finding me, and getting to that point in the season where you just get that flow a little bit. But I don’t want to make it seem like it’s all me. It really is a team effort, and that’s why I said the coaches. It’s like the whole program. It’s everybody.”

UCLA’s odds widened in the wake of the early loss to the Bulldogs and have been stretched further given the cancellations prompted by the pandemic between December 11 and January 6. They won all three of their games during that period but still dropped from No.3 to No.7 in the rankings.