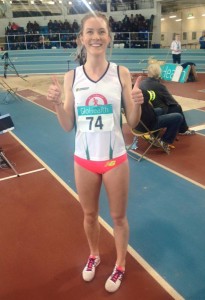 Winning at the Indoor Athletics Championships was a huge step towards being selected as part of Athletics Ireland’s Rio 2016 Olympics squad – which was the exact goal that prompted Claire to set up her Rio 2016 crowdfunding project on PledgeSports.org.

In order to put in the extra training and pay for extra training camps, altitude training, physiotherapy, and all the other things that go hand-in-hand with becoming an Olympian, Claire used sports crowdfunding to ask her supporters for help.

She raised more than £2,000, and her supporters have signed photos and an exclusive newsletter to look forward to as they follow the journey to Rio 2016 that they might just make possible.

We’ll hear directly from Claire about her sports crowdfunding experiences in the coming days, until then, get up to speed on her next target: IAAF World Indoor Athletics Championships – Mar 17-20.

And why not take a look at some of our other sports crowdfunding successes by clicking here.