Audrey McIntosh is preparing to write history as she will run 7 100km ultra-marathons across 7 continents.

Audrey has joined PledgeSports in an effort to fundraise for this extreme expedition – you can view her incredible story here.

As you’d imagine, her preparation for this challenge is gruelling, and perhaps none of her training sessions will be outdone by the terrifying prospect of running the Sandbaggers double marathon across the sweltering plains of the Namibian desert and the sub-zero, icy terrains in Mongolia.

Straight from the diary of an ultra runner, here is Audrey’s account of her scorching marathon through the Namibian sandpit. This is ultra at its very best!

Oven To Freezer – A Double Marathon Experience: The Oven 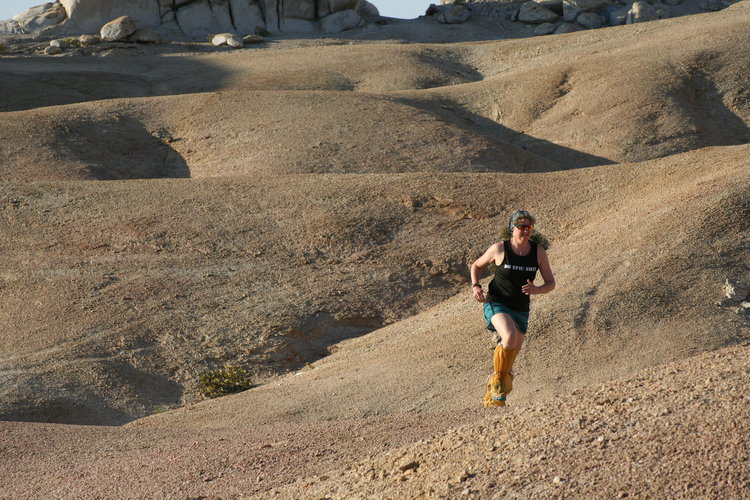 I went into panicked diva mode. Twenty minutes later after a diva inspired ceremonial foot bathing I was sand free, sand tight and good to go. Temperature hot, 20 something, but manageable. Take it steady, don’t do anything stupid and finish.

Like this? You’ll love the entire section we’ve dedicated to “Ultra Athletes” on our blog!

The route was unmarked undulating and winding its way through the desert along the edge of the dunes which rose up majestically out of the sand. They were more like hills. 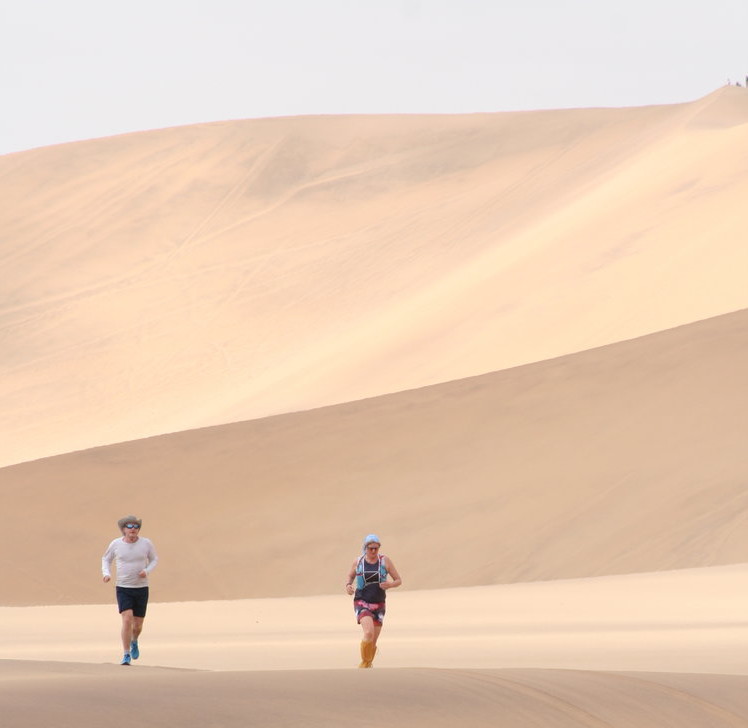 Running through them you were struck by just how awesome and beautiful they were. The variety of the textures and colours of the sand were amazing: orange, gold, beige, black and red sand all mingling and creating swirls of colour and tone.

Once the sun appeared and heat began to build to 36 degrees the desert shimmered in a heat haze and mirages.

The beauty was matched in equal measure by the challenge. This is a tough environment that has to be treated with respect. It was never going to be an easy walk in the park.

It was a slog through hot soft sand that enveloped and dragged at the foot, sand that appeared firm and packed which would shift and fall away underfoot; and there was the energy sapping, strop-inducing heat. 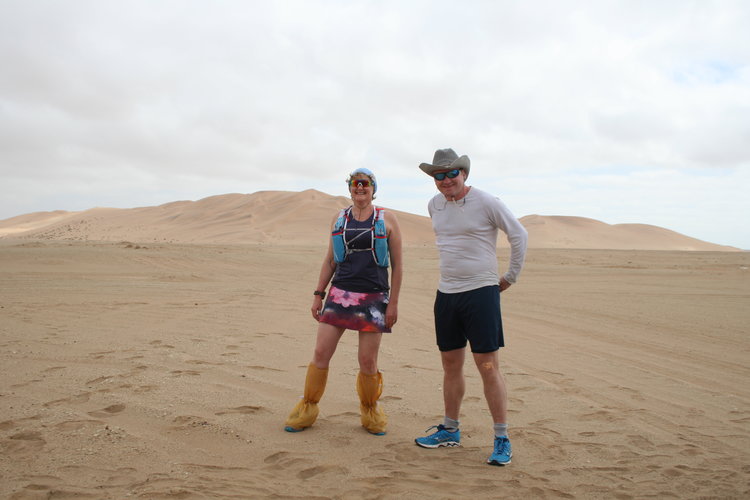 The support vehicle would maintain visual on us most of the time and would be a mobile water station and checkpoint. All we had to do was follow the tyre tracks and keep checking for the visual reference: easy, but perhaps not.

After an over-enthusiastic start, it took a few miles to settle my breathing and pace and start to enjoy the landscape. It perhaps provided too great a distraction as we followed the tracks onto a shelf of flat rock. Chatting away we crossed the rock keeping the dunes to our left but failing to notice that there were dunes appearing ahead and to our right.

Delve inside the minds of lots of interesting athletes in our new “Interviews” section!

Back onto the sand we suddenly noted: no tracks, no van anywhere on the horizon. I involuntarily checked my water bottles one was full and one low: a bit over half a litre of water was not going to cut it if we were lost. 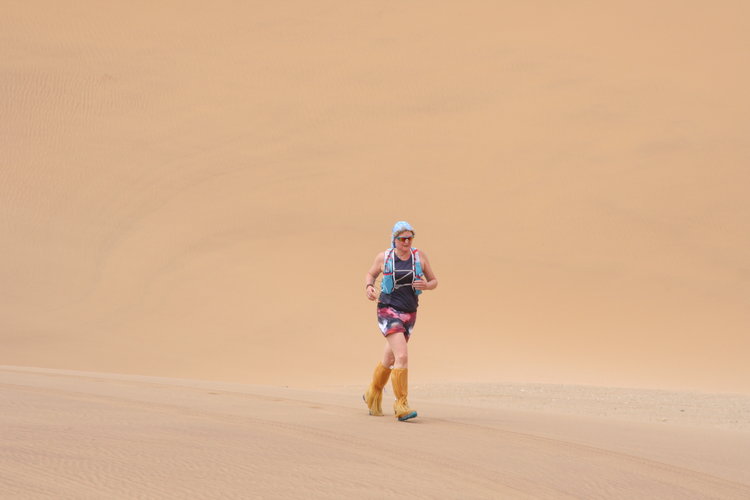 (Cue an unhelpful image of crawling, parched across the desert and scenes from Ice Cold in Alex flashing before my eyes.)

A quick discussion and agreed to head out of the dunes towards a line of telegraph poles marking the railway we had crossed at the start and which was running parallel to the dunes.

Logically, the vehicle should be somewhere between the railway line and the edge of the dunes. As we dropped down the dune I spotted tracks. Phew. Not long after this, we spotted the van.

My companion decided to call it day at this point and I was off chugging through the dunes on my own.

It was getting very hot and I wondered if the factor 50 was doing its job (it wasn’t). 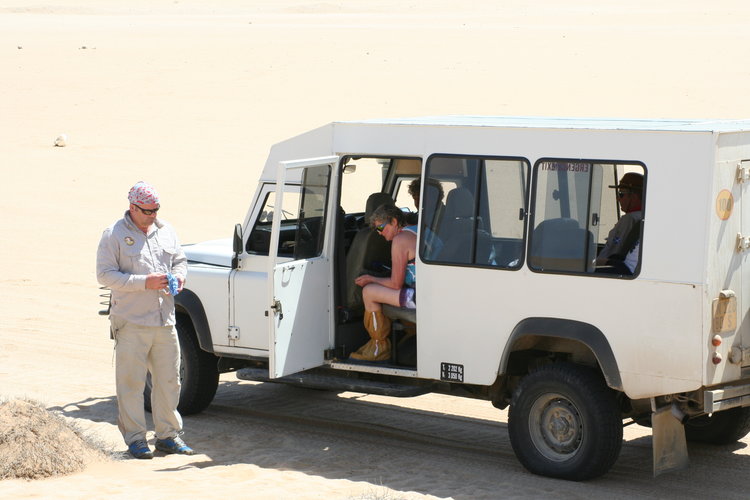 It would not be an ‘Audrey’ event without a wobble and it came at the halfway point. After a long, gradual but gentle climb I was not feeling so good. I knew from my acclimatisation sessions that my temperature and heart rate were high, too high.

I started to feel weepy, distressed, anxious and dizzy. I took a few minutes break sitting in the van to settle.

‘She does this all the time. Looks awful and like she’s going to drop and then she bounces back. Watch.’

At about 18 miles the tracks turned and led me into a bay in the dunes. It was stunning like the desert equivalent of a highland valley surrounded by hills, but the underfoot conditions were particularly hard and sapping and the heat ferocious. 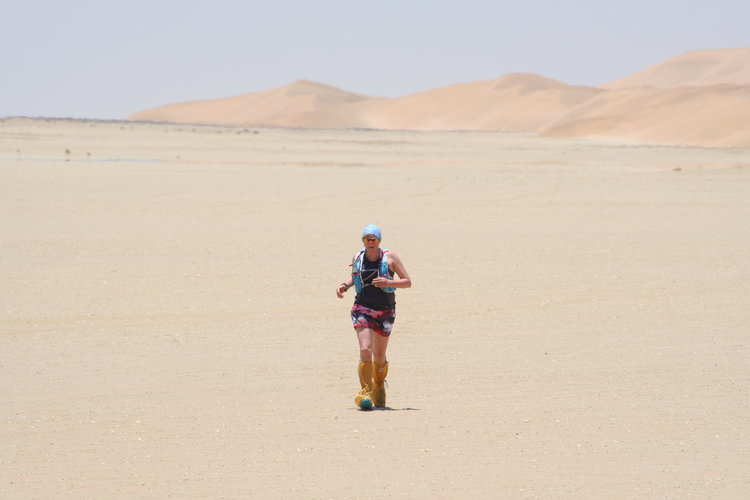 I was happy though because I was making good time and it was looking like I might manage 6.30ish certainly under the 7-hour target I had set.

The van pulled up on the opposite side of the bay at the bottom of a massive dune.

“Oh dear God, they are going to send me up over that dune. I am going to have to scramble up there on my hands and feet. No, no, no. That would blow any chance of beating 7 hours. Stop it, man up, you can do this, time does not matter. It’s the finish.”

Turned out they were messing with me; no scrambling over the dune, phew.

Think ultra runners are the fittest athletes? Check out our controversial hit series “The Fittest Sport”

I was really tired now, but only 6 miles to go. I can do this, but I was so, so hot and it just seemed to be getting hotter and hotter, going uphill and I was getting slower and slower.

The route had moved away from the dunes onto a desert track for a few miles. The miles ticked over slowly and I waved for a couple of extra support stops for fluid and cool down.

One last check-in and the van headed off into the heat haze back to the dunes where it crawled along them before coming to a halt. The finish was in sight. 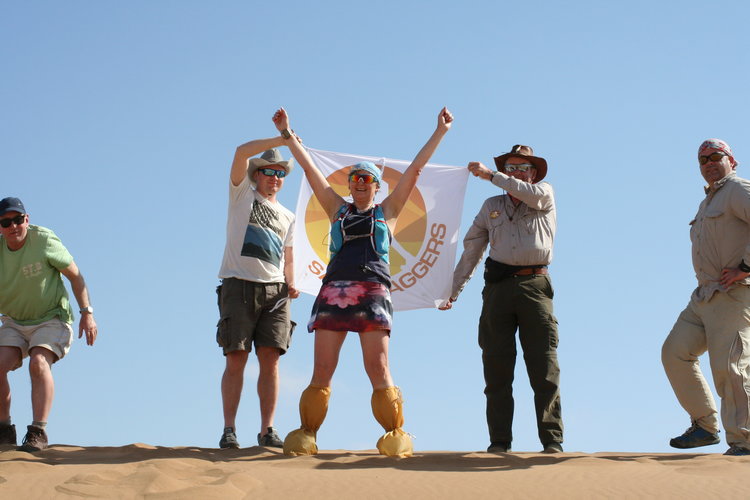 Pick up the pace, lift those feet, lift your shoulders and look up, reel in that van. I spotted everyone assembling on top of the dune, the Sandbaggers flag and I was there, I was done, but not quite, a last scramble up the dune to touch the flag.

‘Let’s get this woman out of here,’ tired and exhilarated I clambered into the van for the short drive back to Swakopmund.

A shower, sunburn tended to and a rest before we convened back at the Tug for dinner.

The next day everyone was content to snooze during the long drive back to Windhoek and a final day of chilling out before Dave, Alasdair and I started the journey to Mongolia.

Got a story or idea you would like to post on our blog? We’d love to hear from you – get in touch via the email address above.

One thought on “Diary Of An Ultra Runner: Desert Marathon Experience”