Great rivalries can do amazing things – sell a sport globally, drive fan interaction wild and also raise the skill level of the athletes to the next level.  The below rivalries in tennis helped these players raise their game and  dominate tennis during their era.

The 80’s was the first era of stardom in tennis and it had 4 very different men dominating the game, each with very different styles and characters, those me were called Bjorn Borg, John McEnroe, Ivan Lendl and Jimmy Connors and together they dominating mens tennis for a long period of time.  The two biggest characters were the Americans, John McEnroe and Jimmy Connors.

Nearly every match became a highly entertaining pantomime – shouting at the umpire and lines people, arguing, trash talk and of course racket smashing.  But don’t let the entertainment value fool you, there was amazing tennis too.

They met 34 times during their 14-year rivalry and McEnroe leads the head to head 20 – 14.  Jimmy Connors holds the record for most ATP singles titles won at 109, 8 of those were Grand Slams, while McEnroe won 77 singles (7 Grand Slam singles titles) and 78 doubles titles; this remains the highest men’s combined total of the Open Era.

A rivalry in terms of drama and theatrics hasn’t been seen in mens tennis since, however Nick Kyrgios is doing a fine job these days!

Uncontested greatest athletes of all time

This is definitely the most prolific rivalry in tennis, Navratilova and Evert have played each other a staggering 80 times!  And 60 of those were in tournament finals.

Evert was at her best in the 1970’s, where she won three majors against Navratilova. But the Czech – American always played at her best in major finals, leading Evert 10-4 on head to head.  Overall, Navratilova leads 43-37.

It is very unlikely that either mens or women’s tennis  tennis will see such a prolific rivalry again.

The battle of the super siblings!  The Williams sister have faced off 30 times in professional tournaments, most recently in the 2018 U.S. Open, with Serena leads their head-to-head 18–12.

Venus has won 49 singles titles over the course of her career, and Serena has won 72, her most recent in Jan 2020.  Serena has the edge and is the GOAT of women’s tennis, winning 23 Grand Slam singles titles, the most by any player in the Open Era,

Agassi and Sampras dominated mens tennis throughout the ’90s, and it really was a magnificent time for the game.  Agassi was probably the first tennis super star, and both he and Sampras where big drivers for the growth of tennis globally throughout that period.

They met each other 34 times with Sampras winning on 20 occasions.  They faced off in five Grand Slam finals with Sampras winning four of them.  Sampras was never as great from the baseline as Andre Agassi was, but he didn’t need to be, the American’s 14 major titles say it all.  He won 64 career titles in total.

Andre Agassi won 60 career tournaments, the majority coming on hardcourt.  Agassi also won Olympic gold in 1996 and is only one of seven men to win the four major titles on all surfaces.

The greatest comebacks in sport 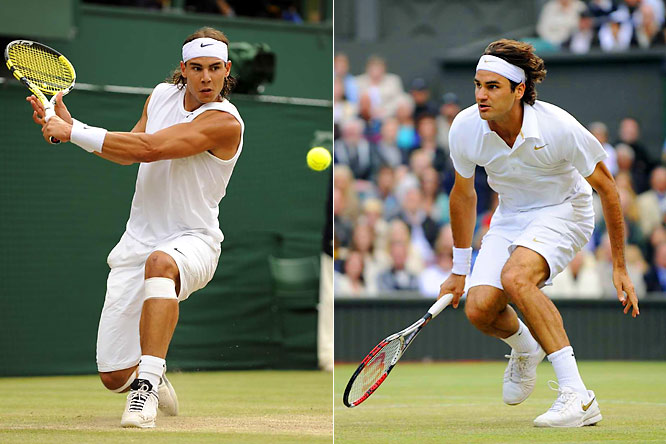 It’s amazing to think that Roger Federer, Rafael Nadal and Novak Djokovic, between them,  have more or less ruled over mens tennis over the past 20 years.  What they have achieved is simply astounding, having 3 players this dominant in the ATP Tour has never happened in the history of tennis or any sport and isn’t likely to happen again.

Just look at the stats here, the big 3 have completely dominated tennis for the last 19 years.  In these 19 years there have been a total of 76 Grand Slams (Including the 2022 Australian Open and counting that Wimbledon was cancelled in 2020).

The big three have won 60 of these Grand Slams!  Yes Roger Federer (40), Nadal (35) and Djokovic (34) have won an and an incredible 60 of the 76 majors since the 2003.  This complete domination for such a long time has never happened in an other sport.

All 3 players have won a Career Grand Slam – winning each major title at least once. As of January 2022, Rafa Nadal holds the all-time record for the most Grand Slam tournament titles with 21, with Federer and Djokovic sitting on 20 each.

In terms of top level rivalry, it’s hard to see this ever being replicated in any sport again.  With Nadal’s recent Aus Open with the 2022 French Open is next.  Then Federer is expected back for Wimbledon which may be his last resurrection,  let’s see how many more years this rivalry can last.