Great sporting rivalries through out the years has fuelled fan euphoria and created many super star individual athletes and world beating teams.  Here’s a look and some modern day rivalries that are continuing to be played out.

Great teams rivalries in US sport

They are by far the top Champions League goal scorers – Cristiano Ronaldo has scored 128 goals in his time at Manchester United, Real Madrid, and Juventus.
Lionel Messi has scored 114 goal for Barcelona.  The next closest is Raúl González at 71 goals!

Since 2008 only one person not named Ronaldo or Messi has won the highly coveted Ballon d’Or award.  Messi has 6 Ballon d’Or’s while Ronaldo has 5.  They have both scored more than 600 goals each for their country and clubs. They are two of the most followed athletes on social media, and their contracts are among the world’s richest among athletes.

Make no mistake, these two have been the best in the world since 2008, but who’s the best??  Guess we’ll just have to wait to see how this world bearing rivalry plays out. 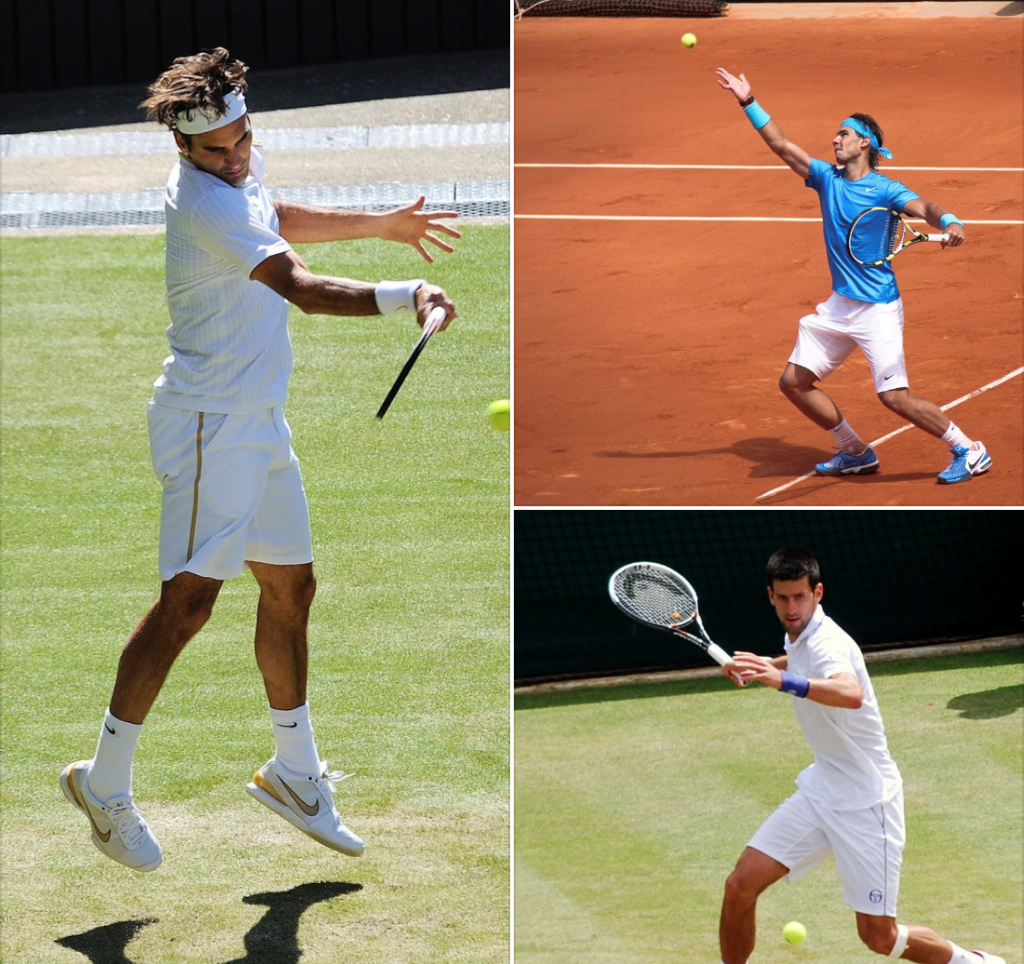 It’s amazing to think that Roger Federer, Rafael Nadal and Novak Djokovic, between them,  have more or less completely dominated mens tennis over the past 20 years.  What they have achieved is simply astounding, having 3 players this dominant in the ATP Tour has never happened in the history of tennis and isn’t likely to happen again.

Right now 39 year old Roger Federer is the GOAT in tennis with 20 majors and holds the all time record with 310 weeks at world No. 1, including 237 consecutive weeks at the top of the ATP rankings, the most of any player.  He is also way ahead in terms of ATP titles with 103, while Nadal sits at 85 and Djokovic at 79.

But his two rivals are younger and have a chance of catching up!

The rivalry of these two teams dates all the way back to the 1930s when Spain was under dictatorship rule. Real Madrid is seen as representing Spanish nationalism, and Barcelona is viewed as representing Catalan nationalism.  Throughout history, Barcelona has been known for its rebellious nature, while Madrid has been a conservative symbol. You often don’t see two cities within the same country with such open political disputes every day.

When these two giants clash it’s nicknamed an El Clásico in Spain  and hundreds of millions of fans around the world tune in.  The clubs are tied in head-to-head results in competitive matches with both sides earning 96 wins.  The rivalry continues of the pitch in the transfer windows and these two clubs are responsible for the most expensive transfers in the history of soccer.

Ryder Cup is considered the greatest showdown in golf.  The best golfers in the U.S.A v’s the best in Europe.  Crowds are massive and loud and home turf has a big advantage, qualifying for the Ryder Cup is highly coveted and winning is everything.

The history of the Ryder Cup dates all the way back to 1927, where the The first ever Ryder cup was held at the  Worcester Country Club, in Massachusetts (won by the Americans).  The Americans dominated the early years but since 1979, the “United States” team has won 8 matches and the “Europe” team has won 10 matches, while retaining the Ryder Cup once with a tie.

The pinnacle of golf is played every two years, and the venue alternates between courses in the U.S. and Europe.  The most recent in September in 2021 saw the USA beat Europe 19–9, it was the largest margin of victory in a Ryder Cup since the United States beat Great Britain and Ireland by 10 points in 1975.

Uncontested greatest athletes of all time

For the past 10 years there have been a few new races introduced and in the sports of kings, money matters.  We have the classic Group one super prestigious races like the Epsom Derby, Prix de l’Arc, Melbourne Cup and Kentucky Derby, but there are a few newer races which are all trying to out do each other in prize money, and the title of world’s richest race has changed hands three times in the last two years.

The Everest in Sydney held the top spot for a while with prize pot of $14 million in 2019 and $15 million in 2020, then the Pegasus World Cup in Florida took over.  Then in 2019 the Dubai World Cup regained its position as the richest horse race in the world.

But as of 2020, there’s a new king in town – The inaugural Saudi Cup in Saudi Arabia had prize money of $20 million with a first prize of $10 million – three times as much as for Europe’s richest race the Prix de l’Arc de Triomphe!