WOMEN’S Rugby will be played at the Olympic Games for the first time this August as the new Rugby 7s tournaments for men and women are introduced at Rio 2016.

In the build-up to that, we have seen an influx in brand new Women’s Rugby teams, and expanding established teams, coming to us with renewed vigour and hopes of one day becoming Olympians. 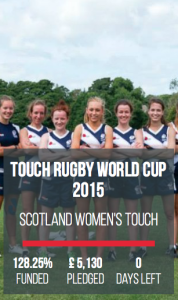 Women’s Rugby funding remains light on the ground, and not a patch on what is available for the men’s game, but Scottish, English, Belgian and now Swedish teams have proven that crowdfunding is the way to bridge that gap for Women’s Rugby 7s, Touch Rugby, and even for National League Rugby.

For us, it started with the Scottish Women’s Touch Rugby Team: last year they were off to the 8th Women’s Touch World Cup in Australia and raised more than £5,000 towards their costs.

Now we’re the proud supporters of the European Touch Champions, England, who raised nearly £2,000 towards their costs for that biennial tournament, taking the Gold in Jersey earlier this month – big well done ladies!

They’re a very established and successful bunch of rugby stars, so it was even more fantastic to see crowdfunding work for the Belgium’s Ladies Touch Rugby Team, appearing at the European Touch Championships for only the second time. Team Belgium also qualified a men’s team and, at short notice, raised nearly €1,300. Neither team made it out of the group stages, but perhaps it’ll be third time lucky in 2018!

How To Crowdfund for Women’s Rugby Funding

They pooled the support of their fans, backers, and local sponsors to gather prizes great and small – from shirts to  hotel stays to meals to holidays – then instead of selling tickets outside their grounds, they sold tickets as rewards through PledgeSports to the world of the internet.

The result was funding exceeding £5,000, and topping their original target by 28%.

Team Belgium also used a lottery system, offering supporters a number of tickets according to what how much they give to their European Touch Rugby Championships Fund.

England’s Women’s Touch Rugby Squad went with the traditional set of rewards as they had enough weight behind them to be able to entice backers in with unique experiences like training sessions, appearances, and merchandise packages.

Now we have a National League team and National Rugby 7s team on board, both with big goals, and both offering a traditional set of rewards. Let’s see how they are doing. . .